Lawmakers will take swift action on new congressional district boundaries when the General Assembly convenes in Annapolis on Monday for a rare December special session.

Partisan tension is expected to run high, as legislators deliberate maps crafted by commissions convened by Republican Gov. Lawrence J. Hogan Jr. (R) and Democratic legislative leaders — and consider whether to override the governor’s vetoes of more than 20 bills passed earlier this year.

Democrats hold wide majorities in the legislature, and are likely to have enough support to enact their preferred congressional map, even over a likely veto from Hogan — though an override of the redistricting plan may not happen until the 2022 regular legislative session begins in January.

Republican lawmakers have charged that the redistricting map released by the Legislative Redistricting Advisory Commission created by Senate President Bill Ferguson (D-Baltimore City) and House Speaker Adrienne A. Jones (D-Baltimore County), is a partisan gerrymander. Their complaints have been bolstered by Hogan, online ads from his political action committee, and Fair Maps Maryland, an advocacy group populated with Hogan allies.

The proposal from the legislative advisory committee — a Democratic-majority panel that included leaders from both parties in Annapolis — would smooth the edges of some of the state’s currently twisty and contorted district lines, and set districts with the possibility of electing only Democrats to Capitol Hill.

In the proposed map, the 1st Congressional District, home to the state’s sole Republican in Congress, Rep. Andrew P. Harris, would shift from solidly Republican to tossup territory by crossing the Chesapeake Bay at the Bay Bridge and incorporating part of Anne Arundel County.

>> Related: Congressional Redistricting: A History of Jumping the Bay

The Princeton Gerrymandering Project — which graded the legislative panel’s proposal as an ‘F’ and Hogan’s as an ‘A’ — said the legislature’s congressional map would create a near-equal partisan split, with 50.9% Democrats and 49% Republican.

The map created by the Maryland Citizens Redistricting Commission and favored by Hogan would likely create a 6-2 Democratic partisan advantage. 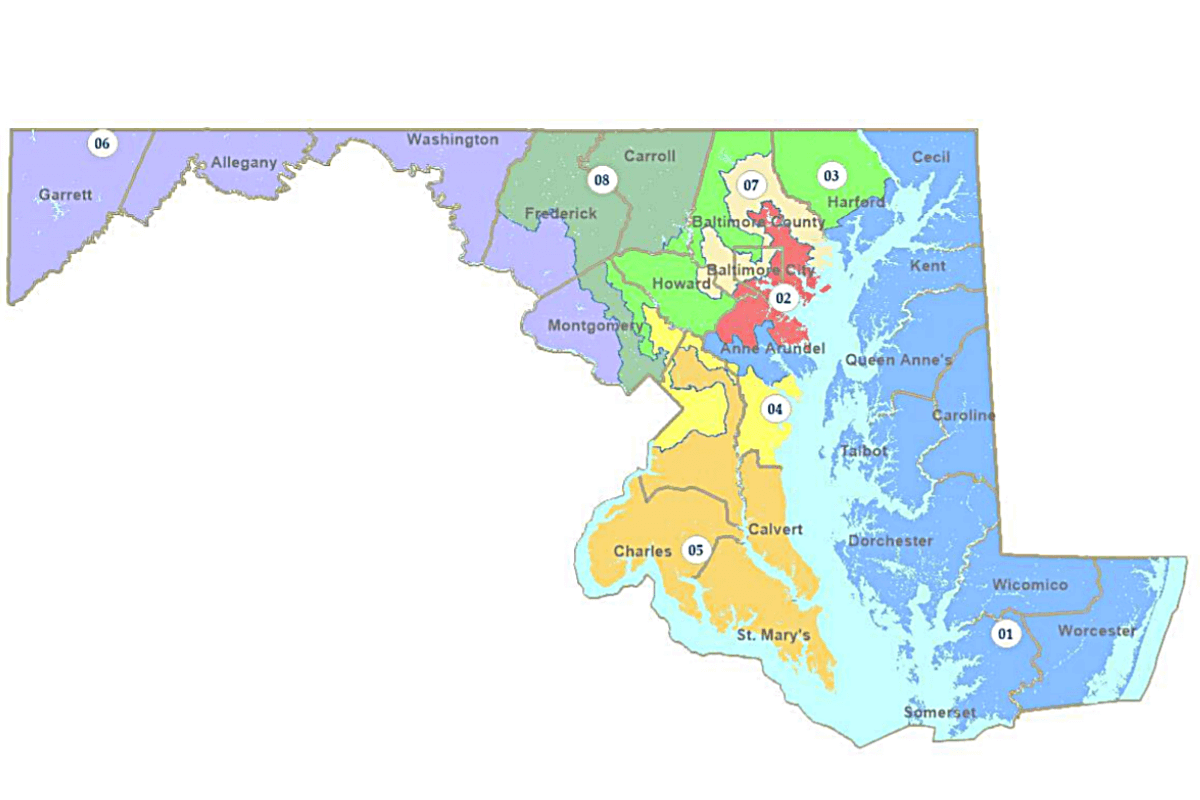 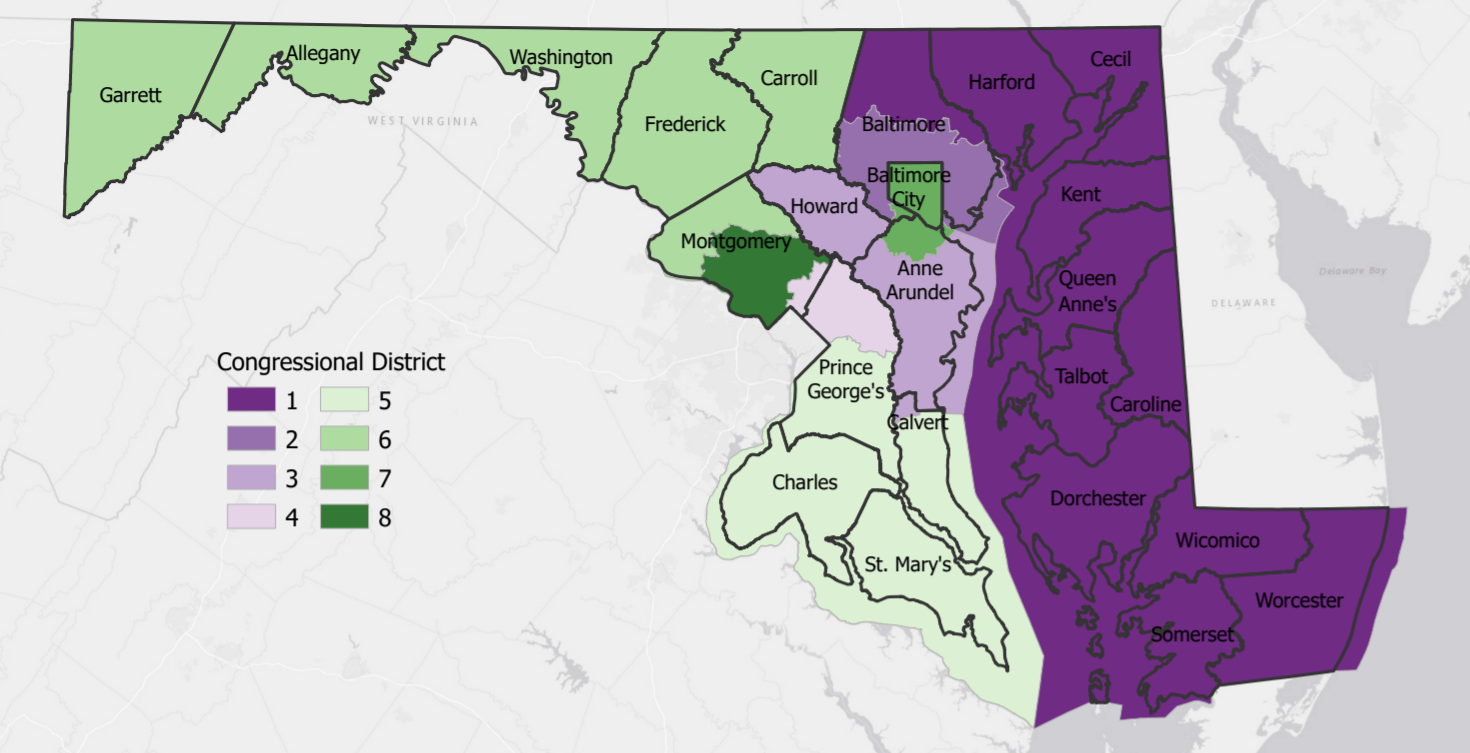 The map approved by lawmakers this week will guide congressional elections in the state for the next decade. And lawmakers will decide which map to approve against a backdrop of a slim Democratic majority in the U.S. House and an evenly divided U.S. Senate. Throughout the country, maps in Republican-controlled states have strengthened that party’s advantage. Republicans are in control of more than 180 districts nationwide, compared to about 75 districts controlled by Democrats, according to Nathan L. Gonzales, the editor and publisher of Inside Elections, which provides nonpartisan political analysis of state and national campaigns.

Maryland Democrats are under some pressure to add to the party’s congressional tally, while Hogan has vowed to veto the legislative commission’s “disgracefully gerrymandered” maps.

Dozens of residents signed up to testify during a brief 35-hour sign-up period last week.

The Maryland Senate and House of Delegates are expected to gavel in at 10 a.m. A joint hearing on two congressional redistricting plans is set for 12:30 p.m.

For the first time since the start of the COVID-19 pandemic, members of the public will be allowed to watch floor sessions in the State House galleries, though seating is limited. Committee hearings will remain virtual during the special session.

While redistricting is the marquee topic for the special session, the General Assembly’s days will be full. Lawmakers have been told to prepare for long days on the floor on Monday, Tuesday and Wednesday. The session is expected to end by Friday, though extended deliberation could push the meeting into the weekend.

Among the vetoed bills under consideration are measures that would remove the governor from the state’s parole process, allowed tiered county-level income tax rates, expand collective bargaining rights for community college professors and employees.

Lawmakers are unlikely to pass emergency bills proposed by Hogan that he said are intended to curb violence in the city of Baltimore.

The brief session could also bring substantial change to the legislative chamber – Economic Matters Chair Dereck E. Davis (D-Prince George’s) is favored to win a secret ballot election as the state’s new treasurer, following the retirement of Nancy K. Kopp, who has held the position for nearly two decades.

Davis was recommended for the position by a Special Joint Legislative Committee to Select the State Treasurer that met late last month.