“It’s just not about one grant, it’s about a movement and how we really use data and tools to help address environmental justice issues,” said Sacoby Wilson, associate professor of applied environmental health at the school, after the announcement Tuesday.

The map gives an environmental justice, or “EJ Score,” for each census tract, and soon will do so for each legislative district, to help illustrate the cumulative environmental impacts in a particular community. The tool also includes information on communities’ socioeconomics, proximity to wastewater treatment and power plants, exposure to pollution and airborne particulate matter, and access to food and green space. 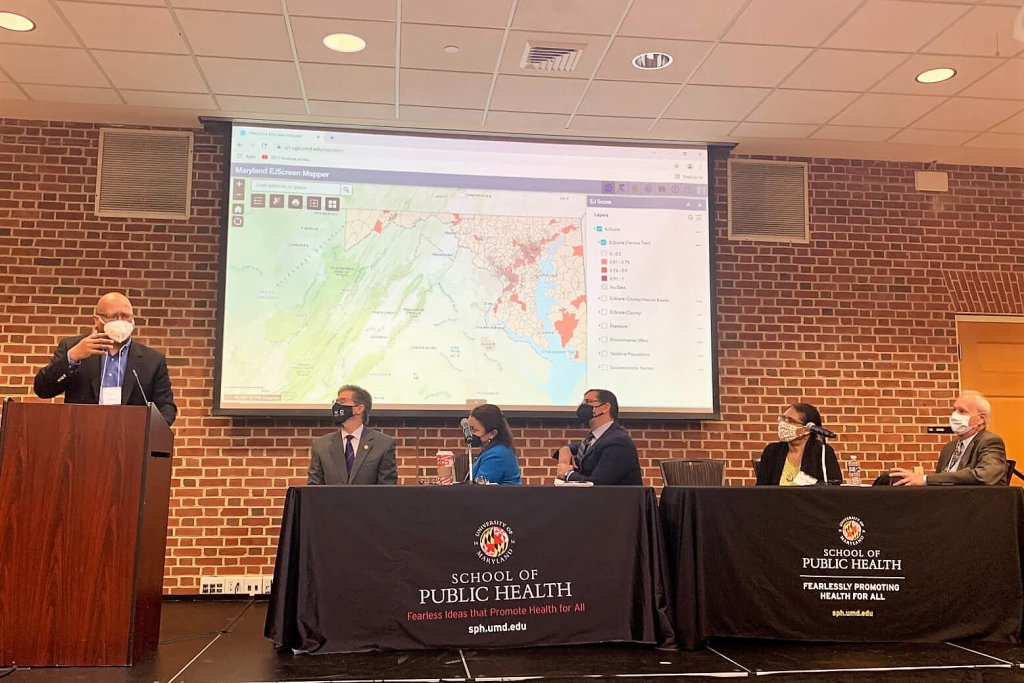 The map has been used primarily as an educational and organizing tool, Wilson said. He said he presented it to the state’s commission on environmental justice and sustainable communities and to other state agencies “with the hope that the tool could be used more as part of the system.” But he said he not sure which state agencies are making use of it.

Currently, the state’s environmental justice map and screening tool focuses on environmental impacts on adults living in urban areas, and for children, it only details how many younger than 5 years old are impacted.

The EPA grant will help fill gaps by expanding the tool’s ability to quantify environmental harms that affect health of people living in rural communities.

The expanded map will include environmental hazards of concern in rural areas such as the use levels of agricultural pesticides, manure and proximity to concentrated animal feeding operations (CAFOs) to better understand impacts on people there, Wilson said.

The expanded tool will also include more data on demographic segregation, water quality and funding streams to show whether money is flowing to communities with the most need, Wilson said.

With the EPA grant, Wilson said he plans to add indicators to better understand outcomes for children in rural areas such as their education, socioeconomic status and health. These indicators could help the state target programs to children who are most vulnerable to environmental injustice, Wilson said.

“Our tool has some gaps…it’s very urban centric,” Wilson said. The state of Maryland is geographically diverse, with many in rural areas relying on well water and septic tanks, he noted. “We want to improve the tool to make sure it captures those rural issues.”

Another goal is to make the state’s environmental justice map and screening tool more “community friendly” by including a “citizen science” component to allow some data gathered by residents to be integrated into the tool, Wilson said.

The state’s environmental justice commission reviewed the mapping tool and recommended that the Maryland Department of Environment use a combination of screening tools or create its own, Secretary of the Environment Ben Grumbles said.

“While we are not looking to create our own tool, we are looking to build upon the excellent work done by EPA and UMD by adding some data layers to help us better assess how communities are affected,” Grumbles said.

More data on cumulative impacts in communities that have had disproportionate exposure to environmental degradation would help MDE in setting priorities for enforcement and infrastructure funding, Grumbles said.

“The more tools we have for scientifically and legally defensible applications, that’s going to translate into more action and hopefully more equity,” Grumbles said.

For the upcoming legislative session, environmental justice advocates are pushing a bill that will require agencies to use UMD’s environmental justice screening tool to ensure that communities that have been disproportionately impacted by environmental harm benefit from all applicable funding streams. That includes the recently passed federal infrastructure bill which aims to rebuild public works systems and fund new climate resilience initiatives, Wilson said. It also relates to President Biden’s Justice40 initiative, which aims to deliver 40 percent of benefits of federal climate investments to disadvantaged communities.

“Data and mapping are actually a representation of our community, it’s a way to actually see the whole community,” said EPA’s new Mid-Atlantic Region administrator, Adam Ortiz. Before Ortiz joined the Biden administration last month, he was environmental protection chief in Montgomery County and had held a similar position in Prince George’s County.

“You can’t see what people are having for lunch that day, you can’t see what their hopes and dreams are but you have a little bit of visibility to who they are and what the condition of their health is and what the environment around them is like, in all corners of our state and our region,” Ortiz said.