In an endorsement that provided a sharp jolt to the Republican gubernatorial primary, former President Donald Trump voiced strong support for Del. Daniel L. Cox (R-Frederick) on Monday, calling him “MAGA all the way.”

“Dan Cox is an America First Patriot,” the former president said in a tweet posted by @TrumpWarRoom. “Dan is MAGA all the way — unlike his opponent, Kelly Schultz (sic), who was handpicked by her ‘boss,’ RINO Larry Hogan, who has been terrible for our Country and is against the America First Movement.”

Schulz, Maryland’s commerce secretary, is considered the GOP establishment candidate, due to her long tenure in Hogan’s cabinet, though she has been slow to define herself and has skipped numerous candidate forums.

Hogan, a Trump critic, tweeted after the endorsement: “Personally, I’d prefer endorsements from people who didn’t lose Maryland by 33 points.”

Cox, a firebrand state delegate who has clashed with Hogan repeatedly — particularly on mask mandates and business restrictions early in the pandemic — has always been regarded as the most Trump-aligned candidate in the field. An attorney in Frederick County, he spent time in Pennsylvania following the 2020 election, searching fruitlessly for problems in the Keystone State’s ballot-counting operation. In January, Cox helped arrange for multiple tour buses to take constituents to a pro-Trump rally that led to an insurrection at the U.S. Capitol and tweeted that Vice President Michael Pence was a “traitor” for upholding the results of the 2020 election as the violence unfolded. Cox has said he left D.C. after the nonviolent rally and denounced the “mob violence” at the Capitol.

Cox has called for an audit of last year’s elections in Maryland, even though no credible allegations of wrongdoing have surfaced.

Analysts said Monday’s endorsement by Trump was no surprise, though they said it could still cause reverberations that impact the eventual outcome.

“Nobody outside of Maryland had any clue who Dan Cox was until an hour ago,” political science professor Todd Eberly said on Monday evening. “Now he’s got the potential to tap into a nationwide donor network.”

With donations from Trump supporters, Eberly said, Cox could be “a thorn in the side of the Schulz campaign all the way through.”

In a statement, the Schulz campaign downplayed the former president’s endorsement.

“Don’t be fooled — Kelly Schulz is the only Republican who can win this race and the only person running who has the strength and ability to prevent the Maryland legislature from passing any law and tax they wish,” he added.

Dirk Haire, the chairman of the Maryland Republican Party, sought to draw a distinction between how Republican voters view their party’s leaders.

Trump’s endorsement contained many of the exaggerated claims and random capitalizations that have become his hallmark.

Cox is “a tough lawyer,” Trump observed. He also said the lawmaker “has done outstanding work in the Maryland General Assembly,” though Cox has passed only two bills in Annapolis and has not served in leadership.

The former president said Cox “stood up to Hogan when he was supporting and meeting with Joe Biden.”

“Dan is for low taxes, school choice, and no more lockdowns,” Trump tweeted. “He supports our Military, our great Vets, our Second Amendment, which is under attack like never before, and importantly, is very strong on Election Integrity. He fought against the Rigged Presidential Election every step of the way, and will bring secure Elections back to Maryland.”

Judges across the country rejected dozens of fraud and mismanagement claims raised by the Trump campaign and the GOP-controlled Congress certified Biden’s victory.

Former Lt. Governor Michael Steele, who frequently denounced Trump and endorsed Joe Biden in 2020, launched an exploratory committee in July. He is expected to decide in the next week whether to enter the race.

Jim Dornan, a Republican strategist who is advising Steele, also sought to downplay Trump’s endorsement of Cox, saying, “Marylanders pride themselves on their independence and will vote for the candidate that shares their values.”

Robin Ficker, a Montgomery County tax activist known for his numerous unsuccessful referendum petitions, is also in the race. 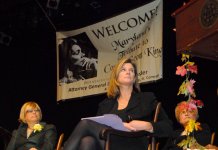 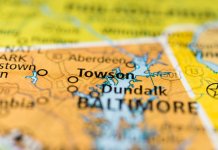