Baltimore residents and local officials told state lawmakers that they want to see legislation improving public transportation, education, public safety and decriminalizing drug use in the city during the next legislative session, which starts in January.

“This is a very important year for the future of the city. The 2020 census has given us some sobering reminders about where there’s work to be done,” Del. Stephanie Smith (D-Baltimore), chair of the Baltimore City House delegation, said at the start of a three-hour virtual public hearing on state legislative priorities Monday night.

In previous years, the Baltimore delegation focused on education, public safety and alcohol legislation, but Smith said the delegation will also prioritize improving transit in Baltimore next year through a transit subcommittee, following the recent passage of the federal infrastructure law that promises to infuse states with money for roads, bridges and ports.

“To date, the greater Baltimore region has experienced consistent underinvestment from the state in its transit infrastructure and this underinvestment — it has had multigenerational adverse impacts…[on] social mobility, economic growth and regional cohesion,” Smith said. Improving public transportation can be a “pillar” for Baltimore to address its significant population loss, Smith said.

The Maryland Department of Transportation is “opaque” on how it uses its federal funds, and so state policymakers could ask for greater transparency from MDOT to ensure that the agency prioritizes equity and climate goals, especially before the influx of federal infrastructure funding, O’Malley said.

On education, residents and leaders urged lawmakers to raise the wages of teacher assistants and school personnel like transportation aides. Currently, they are making around $15 per hour, according to Diamonté Brown, the president of the Baltimore Teachers Union.

“They’re nowhere near a living wage,” she said. “If we can increase these wages, then that will also increase people’s desire to want to work for Baltimore City Public Schools.”

CEO of Baltimore City Public Schools Sonja Santelises asked lawmakers to give students who were not able to get a high school diploma during the COVID-19 pandemic more time to earn their diploma.

“We have students who were on track to graduate but who are not going to age out just before they can earn their diploma,” Santelises said. “We know the lifetime impact of not having a high school diploma.”

Anikwenze Ogbue, a parent living in Baltimore, said he would support legislation that would change the Baltimore City School Board into a majority elected board. Baltimore is the only jurisdiction whose entire board of commissioners is appointed. “The current board structure limits the ability of myself and others to ensure that our students’ needs are prioritized and resources are distributed equitably,” he said.

On public safety, Baltimore Police Commissioner Michael Harrison asked for legislation that would allow him to terminate Baltimore police officers “immediately, if they engage in behavior that is so egregious that it would shock the conscience.”

Baltimore Mayor Brandon M. Scott (D) thanked the delegation for a bill last year that set up the Local Control Advisory Board, which allows Baltimore residents to determine if the city government should regain control of the Baltimore Police Department via a charter amendment during the 2022 or 2024 general election.

But Scott encouraged stronger state regulation of “ghost guns,” or untraceable firearms that can be bought online or made at home.

Baltimore State’s Attorney Marilyn Mosby (D) advocated for legislation reforming the juvenile justice system, such as a measure that would prohibit interrogation of children without an attorney or guardian present. The bill did not make it through the Senate last year.

Baltimore residents also urged the delegation to override Hogan’s veto on a bill that would decriminalize the possession and distribution of drug paraphernalia — including hypodermic needles and syringes.

Laura Garcia, who said she works at Health Care for the Homeless in downtown Baltimore, told lawmakers that being able to hand someone clean supplies is a crucial step in helping patients with addiction. However, the threat of prosecution hinders patients’ decisions in participating in programs in which they can receive clean supplies and medicine.

Her patients have been arrested for possessing clean syringes that were given out by her clinic, Garcia said. “Clean syringes … represented their first steps being taken on a journey to reclaim their health,” she said. “The law should never prevent them from taking that first step.”

Ann Ciekot, a lobbyist representing the Maryland Chapter of the National Council on Alcoholism and Drug Dependence, asked the delegation to support harm reduction measures such as establishing more overdose prevention sites and reducing police involvement in responding to mental health and overdose situations.

The regular legislative session will start on Jan. 12 but the General Assembly will convene in a rare special session on Dec. 6 to determine congressional districts for the next decade.

Editor’s Note: This story was updated to identify Ann Ciekot as a lobbyist. 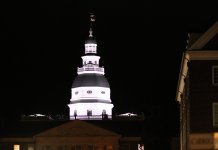