Although civil rights groups have urged Baltimore County Council members to include a second majority Black district in new council maps, an updated draft released by the county council this week still includes only one such district.

Maps released by the Baltimore County Redistricting Commission came under fire earlier this year after civil rights advocacy groups, including the Baltimore County NAACP and American Civil Liberties Union of Maryland, said the maps “pack” Black residents into a single majority district, diluting their power. Only one of seven current council districts is majority Black, and the map proposed by the county’s redistricting commission would have kept that configuration. Roughly 47% of Baltimore County residents are Black, Indigenous or people of color, according to the ACLU of Maryland.

Under the new proposed council map, first reported by the Baltimore Sun, five of seven districts are majority white and another has a 46.17% white plurality. Just one district is majority Black at 72.59%. In response to community feedback at a public hearing last month, the map unites Towson in a single district as opposed to splitting it into multiple districts it as the map proposed by the county’s redistricting commission would have.

An interactive version of the new proposed council map is available online.

Sen. Charles E. Sydnor III (D-Baltimore County), who joined civil rights advocates in calling for a second majority-Black council district last month, slammed the new proposal on Twitter as being worse than the initial map from the county’s redistricting commission.

Sydnor previously said the map from the county’s redistricting commission violates the federal Voting Rights Act, which bans minority vote dilution by cracking, or “fragmenting the minority voters among several districts where a bloc-voting majority can routinely outvote them,” according to the U.S. Department of Justice, or by “packing them into one or a small number of districts to minimize their influence.”

“This is packing at its worst,” Sydnor wrote Tuesday. “This does not remedy what I pointed out in the last map.”

The ACLU of Maryland, which alongside the Baltimore County NAACP submitted several proposals to the commission to include a second majority-Black council district in the county’s next set of maps, likewise criticized the new proposal. In a joint statement with the Baltimore County NAACP on Twitter, the ACLU wrote that “the new plan is no better than the original one and perpetuates unequal representation in the county for another decade.” 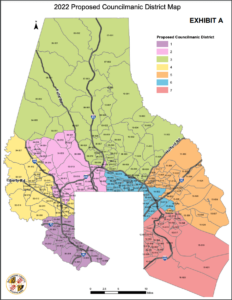 An updated Baltimore County Council redistricting plan released this week does not include a second majority Black county council district despite calls from advocates and lawmakers.

Baltimore County Council members drew a majority Black council district in 2001 after a push from civil rights activists. No Black person had ever been elected to the council before that district was drawn, and Randallstown NAACP President Ryan Coleman noted at a public hearing in late October that residents of the lone majority Black district have elected a Black council member in every election since, while majority white districts have elected white council members.

“One majority Black district was sufficient in 2001, but 20 years later, that is no longer the case,” Justin Nalley, a policy analyst for the ACLU of Maryland, said at that late October public hearing, noting that Black residents make up roughly 30% of the county’s population.

The county’s redistricting commission said in its final report that “it should be mathematically feasible” to create a second majority Black council district, but commission members wrote that drawing a second district would make other districts less compact. Robert E. Latshaw Jr. (R), the county redistricting commission’s chair, defended the panel’s proposed maps at the late October hearing, and said the commission wanted to maintain the current majority-Black 4th Council District.

“It was not easy or practical for us to be able to make two districts where there was a very high majority of African Americans,” Latshaw said.

In an interview Thursday, Jones said he thinks two majority Black county council districts would be “justified” based on the county’s population, but said council members found it difficult to do so without splitting up neighborhoods and communities.

He noted that it will take five votes to finalize the county’s next council map before the Jan. 31 deadline and said the newly released map represents what the council could come to a consensus on.

“At the end of the day, after tremendous conversations and examinations of maps … the map we’re looking at is the map that people on the council would agree to move forward with,” Jones said.

Gerald Morrison, the first vice president of the Baltimore County NAACP, said at that October public hearing that the alternative maps proposed by his organization and the ACLU offer “indisputable evidence” that an additional majority Black district can be created.

The county council will hold a public hearing on Dec. 14 on the proposed maps.

Opinion: To Stem the Tide of Violence, Look to Medicaid

Expanding Medicaid would provide access to federal funds that would relieve the state of half the cost of violence prevention services.

Roughly 30% of Baltimore County residents are Black, according to U.S. Census data, and nearly half are people of color, reflecting growing diversity in the county.