Fourth in a series.

The topic was Republican Gov. Lawrence J. Hogan Jr.’s record on climate change. But it took John B. King Jr. all of 40 seconds to include one of his rivals for the Democratic gubernatorial nomination, state Comptroller Peter V.R. Franchot, in the conversation.

“The core of the record is missed opportunities,” King said during a recent interview. “We should be leading in Maryland on climate action and environmental justice and we haven’t been. I think there’s a level of denial from Gov. Hogan and frankly the Board of Public Works, including Peter Franchot, about the existential threat that we face, and a lack of urgency to move us from fossil fuels and toward renewable energy, and a lack of vision for the number of economic opportunities that the green economy presents.” 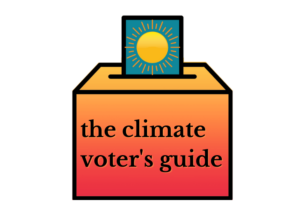 King, 46, is making his first run for elective office. He’s a lifelong educator who served as New York State’s commissioner of education and then as President Obama’s second secretary of education. He likes to say he’s putting some of the lessons he taught as a high school social studies teacher into practice on the campaign trail.

It’s relatively early in the Democratic scrum for governor, but the nine candidates are scrambling to distinguish themselves from their opponents. King’s attacks on Franchot, one of the frontrunners, are noteworthy. He’s especially aggressive about calling Franchot out for his votes to enable Hogan’s plan to rebuild the American Legion Bridge and widen portions of the Capital Beltway and Interstate 270 to move forward.

“We’ve had, with Gov. Hogan and Peter Franchot, an obsession with highways,” King said. “It’s really a commitment to the transportation policy of the 1950’s, rather than a transportation policy that makes sense for the modern era. If we’re serious about climate, we have to shift our focus to public transit.”

(Franchot, in a recent interview with Maryland Matters, says he believes most of the vehicles that will be on the road by the time all the highway improvements are made will be powered by electricity.)

More broadly, King says “I don’t see a lot of specificity” when it comes to his rivals’ climate proposals.

“It’s become automatic for Democratic candidates to give lip service on climate change and environmental justice,” he said. “Many of my opponents have vague policy platitudes rather than specific policy positions.”

King released his climate action plan earlier this month, and while it may not have as many provisions as those of some of his opponents, he does appear to provide more details on how he plans to meet his goals than most of his opponents. King pledges to get Maryland to net-zero carbon emissions by 2035, with an interim goal of a 60% greenhouse gas emissions reduction by 2030, and his plan lays out specific goals for distinct sectors.

King refers to it as “a whole of society approach to tackling climate.”

The list of priorities is broad and deep. On the transportation front, it includes fully funding mass transit expansion; committing to making all government vehicles 100% electric by 2030 and 60% of privately-owned vehicles electric in the same timeframe; and decarbonizing and boosting resiliency at the Port of Baltimore, among other things.

For buildings and homes, King wants to promote energy efficiency; aim for 100% clean energy use in all public buildings by 2030; provide incentives to residential and commercial property owners to convert their homes or businesses to electric or geothermal energy; and phase in the use of battery-powered appliances, and other provisions.

Fittingly, there are several educational components to King’s climate plan.

Now that he’s campaigning full time, King is on leave from his job as president of The Education Trust, a nonprofit in Washington, D.C., that works to close the achievement gap between white students and students of color. He is also co-chair, with former New Jersey Gov. Christine Todd Whitman (R), of the National Commission on K-12 Climate Action, which aims to make schools become “a force toward climate action, solutions, and environmental justice,” according to the group’s website.

Last year, King founded a progressive advocacy organization called Strong Future Maryland, which made climate change one of its top priorities, along with education reform and criminal justice reform. One of the bills the group supported in the 2021 legislative session, the Climate Crisis and Education Act, would have created pollution fees on fossil fuels and certain new vehicle sales and registrations and earmarked much of the money for education. The bill stalled but is likely to be reintroduced, and King says it’s a measure he would support as governor.

King also stresses that Marylanders will need to be educated to embrace aggressive climate action — and to understand what opportunities exist to adapt their homes and businesses so they no longer rely on fossil fuels.

“If you help folks understand that actually they could be saving money if they weatherize their home, if they switched over to solar panels, if they move to an electric stove rather than a gas stove,” he said. “If they made those changes, they could actually save money and benefit the environment. People are happy to make those choices.”

He also preaches expansive education and job training programs to help students and workers — especially students and workers of color — access the emerging green economy. And he’d also offer educational opportunities to workers in fossil fuels industries who want to make the transition to working for renewable energy companies and adjacent industries.

The Blueprint for Maryland’s Future, the education reform plan that King has championed as a baseline for improving Maryland public schools, would help ensure that students are properly trained for these jobs, he said.

King envisions the position being akin to the role Gina McCarthy, the former U.S. Environmental Protection Agency administrator — “my colleague in the Obama administration,” he called her — is playing now for President Biden.

Under his administration, King said he’d insist that climate “be a consideration” for most agenda items before the Board of Public Works, which the governor chairs. And he said he’d like to see the General Assembly make climate impacts one of its regular criteria for evaluating legislation.

King has been a vocal opponent of expanding natural gas access in the state, but said nuclear power must, for now, remain part of the state’s renewable energy portfolio.

On the transit front, King supports building some version of the Red Line in Baltimore and a link between Prince George’s County and Southern Maryland, and wants to increase the frequency of MARC trains and expand the service deep into Western Maryland.

“There’s a lot we can do on public transit that would be good for climate and good for people’s quality of life,” he said. “Not to mention there are all these things we could be doing to create sustainable communities — and transit-friendly street designs and bike paths and walkable communities.”

To pay for the transit expansion, and climate resiliency programs, King wants to use some of the influx of federal funding coming from the newly signed infrastructure bill, and also use some of the pollution taxes the state would collect under the Climate Crisis and Education Act. He thinks some of the state budget surplus, along with “fair taxation,” which would ensure that millionaires “pay their fair share,” would also help.

“We’re going to pay in other ways from the damage that climate change wreaks,” he said. “And so we really have to think of this as a way to invest now to prevent greater harm and greater expense later.”

Getting back to King’s criticisms of Hogan and Franchot on the highway widening project, he conceded that the proposed rebuild of the American Legion Bridge is “important.”

“But we shouldn’t move forward with the toll road,” he added.

Asked to name his personal climate hero — a question Maryland Matters posed to all the Democratic contenders for governor — King said Pope Francis.

“I’m a Catholic, so I appreciate that the pope has been such a forceful voice on the climate issue,” he said. “I think it is a powerful interfaith issue.”

King said he recently gave a speech about climate change at the Cedar Lane Unitarian Church in Bethesda and as he was preparing for it, “I was thinking about how, in every major religion, in every faith tradition, there’s a lot of discussion about humankind’s responsibility for the Earth.”

Coming Wednesday: An interview with Tom Perez. Click here for other stories in the Climate Voter’s Guide series.