Third in a series.

Peter V.R. Franchot arrived in Washington, D.C., as a young lawyer in 1979, to take a job as legislative counsel to the Union of Concerned Scientists. Just a few weeks later, there was a near-meltdown at the Three Mile Island nuclear plant in Pennsylvania, and Franchot found himself on national TV and on Capitol Hill, testifying about the dangers of nuclear power.

“I was a huge anti-nuclear person,” Franchot recalls.

Today, with a sense of ambivalence and irony, the state comptroller, a Democratic candidate for governor, considers nuclear energy, at least for now, a vital part of his ambitious plan to put Maryland on the path to generating carbon-free electricity by the year 2030.

Compromise — and ambition — are nothing new to Franchot. In fact, they are hallmarks of his improbable political journey over the past three and a half decades, from flame-throwing back-bench member of the House of Delegates, to moderate voice of reason and ally of Republican Gov. Lawrence J. Hogan Jr. as the state’s chief fiscal officer, to a can-do truth-teller with a diverse collection of supporters who appears to be the early frontrunner for the Democratic gubernatorial nomination.

Earlier this year, Franchot, who turns 74 on Thanksgiving Day, laid out campaign pledges in 14 policy areas. On the environmental front, they include making Maryland the first net-zero state for carbon emissions and an exporter of clean energy; guaranteeing a healthy future for the Chesapeake Bay; and building “a world-class, integrated and statewide transit system.”

Franchot believes all 14 pledges, including those on education, health care and job creation, mesh together — and impact the state’s ability to respond to climate change in one way or another.

“Climate change in my view is one of those existential threats,” he said in a recent interview. “It’s the kind of issue, in my view, that brings together all the things that I’ve laid out in great detail in my platform.”

In the course of a 45-minute interview on climate change, Franchot reassessed the crisis level posed by a warming planet.

“I don’t want to say we’ve crossed the Rubicon,” he said toward the beginning of the conversation. “But it’s more than an inflection point. It’s a major, major existential threat.”

Later, after discussing the scope of the problem and his policy prescriptions, he suggested, ruefully, that “maybe we have crossed the Rubicon after all.”

‘Voter confidence and trust has been broken in state government’

Franchot’s plans for confronting the challenges posed by climate change are nothing if not ambitious.

He wants the state to switch to 100% renewable energy generation by 2030, which he calls “a very aggressive date,” with a zero emissions portfolio at some unidentified later date. And he wants the state to become an exporter of clean energy by then.

“We want Maryland to be the No. 1 go-to state in the country for people and businesses who believe in renewable fuels,” he said. “We want to be the national center for production.”

To achieve this, Franchot said he’ll sign an executive order on the first day he’s governor, requiring state agencies to only purchase renewable fuels for their operations. Similarly, he pledges to transition the entire state fleet to electric vehicles by the end of his first term. And he wants to mandate that the private sector convert two-thirds of its electric generation from fossil fuels to solar, wind and geothermal. But he’s a little less clear on how to boost the state’s renewable energy production.

Franchot is a major proponent of energy and battery storage technology, and he’s a fan of carbon capture technology — though both technologies are in the early stages of development, and it isn’t yet known when, or even if, they will be available for widespread use.

And Franchot suggested that as governor, he would have the power to influence the state pension system’s board of trustees to divest from fossil fuels, “which actually is in the best fiduciary interests of the state.”

Franchot acknowledged that a rapid transition to green energy could mean a modest increase in consumers’ utility bills, but he said that two-thirds of the population is able to absorb the cost, and would appreciate why it was necessary. He said it would then be up to state government to figure out “how to protect the vulnerable” — the approximately one-third of the population that might be negatively impacted by higher energy costs.

Since declaring his candidacy for governor, Franchot has said he’ll focus on small, customer service-oriented priorities when he first takes office, like filling every pothole on state highways, ensuring that trash is picked up on state roadways, and making sure phones at state agencies are answered within 60 seconds. Fulfilling these promises in the first three months, he argues, will restore Marylanders’ faith in state government, and enable him to then pursue his more ambitious goals.

“Voter confidence and trust has been broken in state government, by the unemployment fiasco, by the rent relief fiasco, by the massive fraud that’s going on in some of these relief programs,” he said. By contrast, Franchot boasts that his agency, the comptroller’s office, has been quick parceling out aid passed down by the federal government, which adds to the trust voters will place in him “to do something really significant.”

“I think it’s that kind of confidence that people will have in me that would allow me to do something transformative on the climate issue,” he said.

To pay for his proposals, Franchot is eyeing the $5 billion state surplus his agency recently identified. About $900 million, he said, should be used to provide relief to 433,000 of Maryland’s neediest families. More than $2 billion should be used to bolster the state’s rainy day fund. The rest, he said, can be used to promote and pay for clean energy development, among other priorities.

As Hogan and state lawmakers begin to debate what to do with the surplus, Franchot poses a question: “Can we have some of that money, please, for these important programs?”

Franchot has been criticized by environmentalists for his votes on the Board of Public Works green-lighting portions of Hogan’s plan to rebuild the American Legion Bridge and widen sections of the Capital Beltway and Interstate 270. But he defends his stance, arguing that improvements to a 60-year-old bridge are essential and that by the time a new bridge is built and the initial improvements are made to the highways, most vehicles on the road will be powered by electricity rather than gasoline.

Franchot also maintains that he’s in favor of widening the leg of the Beltway that runs from the bridge to 270, and for widening 270 north to Rockville. Franchot said he’s intrigued by the possibility of reversible lanes on sections of 270, as Montgomery County Executive Marc B. Elrich (D) has proposed, and in running mass transit up 270 to Frederick — and possibly west along I-70 to Hagerstown. But he does not see the need for widening the Beltway east of I-270, where community opposition is intense.

Franchot said he does not see the need for a “climate czar” in his administration, to coordinate the activities of state agencies.

“They need a governor that’s going to have this as a top priority,” he said. “I think I’m the only [Democratic candidate] who can deliver on a practical solution.”

Franchot has long been an advocate for expanding mass transit in the state, dating back to his first years in the House of Delegates, when he was an early champion of the Purple Line. And like most of the Democratic candidates for governor, he’s in favor of reigniting a plan for east-west transit in Baltimore, as well as a transit link between Prince George’s County and Southern Maryland. But Franchot’s proposal comes with a twist.

“I don’t consider the light rail I see in Baltimore as something special,” he said. “We’ll do the Red Line, but what I’d really like to see is a big, sleek, beautiful red monorail — something that’s eye-catching to the nation.”

Franchot said transit proposals in Maryland have become too dependent “on huge locomotives” and that he’d like to see the I-270 and Southern Maryland lines built as monorails as well. He likened this crusade to his push a few years ago to elevate the craft beer industry in the state, and predicted that building monorails would be both a boon to commuters and a magnet for tourists.

Franchot does not support a carbon tax or a tax on polluters. He said it’s more important to get buy-in from fossil fuels companies to develop carbon capture technology.

But he said the industry must pay for the degradation it has wrought in communities of color and other poor neighborhoods. Some percentage of fossil fuel company profits should go to a restitution fund for communities of color, he said, and state government can serve as the conduit.

“The redlining has to be turned into greenlining,” he said.

Franchot is one of the few Democratic candidates for governor to spend significant time in rural parts of the state, and that may pay dividends in next June’s primary. While other candidates may struggle to convince residents of the Eastern Shore that aggressive regulatory measures are necessary to guarantee the health of the Chesapeake Bay, Franchot said he can do a better job of bringing people together because he understands the culture and economy of the Shore.

“I think the strategy of the Bay is just to be honest and say there’s a slow, steady decline in the health of the Bay,” he said. “Nowadays, if it gets a C-minus, everybody’s like, ‘Wow, we’re glad we’re not in the D category.'”

Franchot offers several policy prescriptions for improving Bay health, including growing the oyster population, going aggressively after “corporate polluters,” and sponsoring a multimillion-dollar scientific competition to come up with technological solutions for dead zones in the Bay.

“I want to accomplish things [on Bay health] that make people happy and make them see progress,” he said. “But over it is the umbrella of climate change.”

Asked to name his personal climate hero — a question Maryland Matters posed to all the Democratic contenders for governor — Franchot mentioned the Swedish teenaged climate activist Greta Thunberg, though he referred to her as “that young woman.”

“She got up the other day and said, ‘Here’s what I’m hearing from politicians on climate: Blah blah blah blah blah,'” Franchot said. “It’s just empty rhetoric. I’m the opposite.”

Coming Tuesday: An interview with John B. King Jr. Click here for other stories in the Climate Voter’s Guide series. 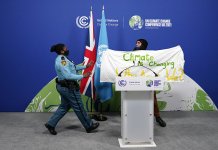 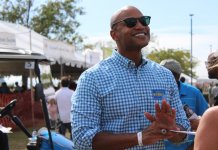