The Prince George’s County Council is scheduled to vote on a controversial council redistricting plan this week — and two councilmembers who oppose the proposal are urging voters to oust the officials who crafted it.

The lawmakers calling for the ouster — Thomas E. Dernoga (D-District 1) and Jolene Ivey (D-District 5) — participated in a League of Women Voters redistricting forum on Saturday.

They charged that the six colleagues who crafted the proposal did so to alter the trajectory of the 2022 elections by moving certain candidates from one district to another. Doing so, Ivey and Dernoga told attendees, would influence policy-making in the county for years to come.

“The development interests and big business interests like the way things are run, and have been run, for years, where they can just run roughshod [and] do zoning — special text — amendments that the public’s not aware of…,” Dernoga said.

“It seems to be to block certain candidates,” said Ivey. “It seems evident that it’s designed to exclude certain people from running in the districts that they were running in.”

In October, the council voted 6-4 to replace a redistricting plan crafted by an independent commission with one the majority crafted among themselves. Ivey and Dernoga were among the four lawmakers who voted against the alternative. They and others on the panel complained that the substitute, which was crafted by Derrick Leon Davis (D-District 6), was sprung on them — and the public — at the last minute. 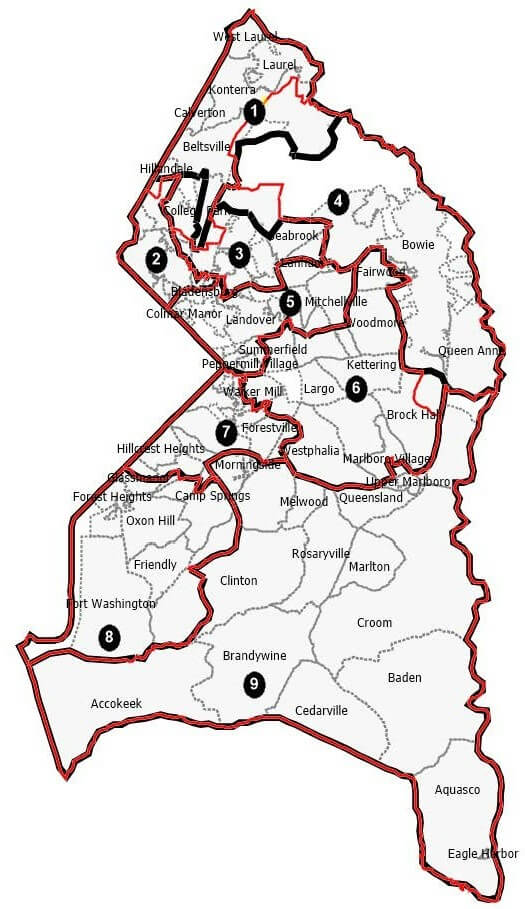 Amid mounting criticism and in the wake of a well-attended citizen rally, the majority tweaked their plan, but critics said the changes did not go nearly far enough.

If the Davis plan is approved, former Councilmember Eric Olson (D), who is attempting a comeback, would find himself in District 1, Dernoga’s district, rather than District 3, which is an open seat that he has been campaigning for since summer.

Olson supporters say the zig-zag shape of the proposed district makes it obvious that his neighborhood was targeted to thwart the independent-minded former office-holder.

In an interview last month, Davis rejected the suggestion that he sought to help or hurt individual candidates. But Council Chairman Calvin S. Hawkins II (D-At Large), a supporter of Davis’s map, told the Washington Post last week that lawmakers were fully aware of the political impact of their actions.

“I am not acting like I am naive. I know this is a political process,” Hawkins said. “Everyone knew where everyone lived.” Hawkins did not respond to two requests for comment.

The Davis plan would also appear to protect two other incumbents from a difficult primary next year.

Councilmember Sydney J. Harrison (D- District 9) would be spared a rematch with community activist Tamara Davis Brown (D) because she has been moved into District 8. Harrison squeaked past Brown by 55 votes in 2018.

Councilmember Rodney C. Streeter (D-District 7) would not have to face progressive activist Krystal Oriadha (D) next year because she has been moved to District 5. Oriadha finished 31 votes behind Streeter three years ago.

Harrison was among the six councilmembers who voted to ditch the commission map in favor of Davis’s plan. Streeter had surgery over the summer and has not participated in any of the council’s online sessions since.

In an interview on Sunday, Mel Franklin (D-At Large) said that when Davis first floated alternatives, he was unaware of where potential candidates lived.

Asked about the statements Ivey and Dernoga made at Saturday’s forum, Franklin suggested they are lashing out because they lack influence.

“When you are in the minority on a lot of votes on the council, a frustration sets in, and it causes you to attack your colleagues,” he said. “It’s not healthy and it’s not helpful, nor do I think it’s effective.”

Ivey accused backers of the current plan of avoiding public appearances, saying “(they) have not been participating in public discussions about it.”

She said Hawkins was scheduled to appear with her at a forum on Wednesday but backed out at the last minute. “Things seem to come up,” she said with a hint of sarcasm. “If they really believe what they’re doing is right, you’d think that they would be right here, up front, defending it — and I don’t see them at all.”

The Council is scheduled to hold a final vote on Tuesday. It must again attract six votes to become law. If it fails to do so, the map produced by the independent commission would automatically take effect on Nov. 30.

Despite the uproar over the Davis plan, supporters are “really dug in,” Ivey said.

“We have an election coming up,” she added. “People aren’t dumb. … Once they start reaching out and letting their position be known, they’re going to be heard. And if they’re not heard Tuesday, they should be heard on June 28, at the ballot box.”

The public will be given an opportunity to speak immediately prior to Tuesday’s vote. It is scheduled to take place at 3pm. As of Sunday, 108 people had signed up to testify, a spokeswoman said.

Dernoga told attendees at the forum that a shift of a small number of seats in next year’s elections would bring about a less developer-friendly council.

“If you got a critical mass of people who wanted to change the way we do business, that would change their business, and that’s a large part of why those three people in particular were redistricted in ways that make it hard for them to run,” he said. “There are bigger forces at play here and people need to understand that.”

Davis told Maryland Matters last month that the proposal he crafted had two major goals — to boost the Latino population in District 2 from 49% to 51% and to unite certain municipalities.

He also boasted that he made skillful use of parliamentary procedure, saying, “I do big things on purpose. … Councilmember Ivey and them, they seem to be caught off-guard an awful lot.”

All 11 members of the council were invited to Saturday’s forum, which was attended by 60 residents. Only Ivey, Dernoga and Dannielle M. Glaros (D-District 3) attended. Glaros, who is term-limited, was among the four council members to reject the Davis map.

The fourth “no” vote was Monique Anderson Walker (D-District 8), who has since resigned. She was tapped last month to run for lieutenant governor on a ticket headed by Comptroller V.R. Franchot (D).

Franklin submitted a video of himself speaking at a council meeting for event organizers to play in his absence.