Harris, the state’s lone Republican in Congress, was among a majority of U.S. House Republicans who objected to certifying the 2020 presidential election results after the insurrection at the U.S. Capitol on Jan. 6. People who testified at Monday’s meeting cited that vote, alongside Harris’ vote against awarding Congressional Gold Medals to police officers who protected the Capitol that day, as reasons to draw a more competitive 1st District.

“The existing congressional map has empowered an extremist to represent us with little fear of retribution for any of his actions or comments,” Queen Anne’s County resident Peter Behringer said at a statewide virtual LRAC hearing Monday.

Behringer said lawmakers should draw up a 1st District that is “competitive and balanced” and empowers people of color.

Those who testified overwhelmingly supported Plan 3, boundaries proposed by the commission that include a large portion of Anne Arundel County with the Eastern Shore and is the closest to an 8-0 Democratic map. That plan would include a 1st District that would favor Democrats 55%-45%, according to an analysis by the Princeton Gerrymandering Project.

Plan 2, which includes a smaller portion of Anne Arundel County with the Eastern Shore, would favor Democrats 51% to 49%, according to the analysts at Princeton. The Princeton Gerrymandering Project gave all four maps a failing grade after researchers rated them based on “partisan fairness,” “competitiveness” and “geographic features.” 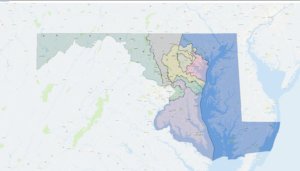 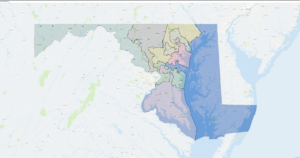 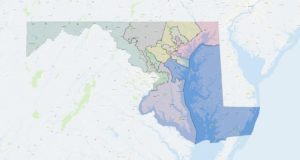 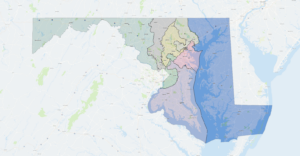 Harris has handily won re-election bids in the 1st District since he ousted Democratic Rep. Frank Kratovil won by a wide margin in the 2010 election, and garnered 63.4% of the vote against challenger Mia Mason’s 36.4% in the 2020 election. His current Democratic challengers include former state Del. Heather R. Mizeur and foreign policy strategist R. David Harden.

The 1st District currently includes the entire Eastern Shore before looping north to include parts of Harford, Baltimore and Carroll counties.

“He can lean extremely far to the right since the current map stacks Republicans together in District 1,” Felicia Martin, a Harford County resident, said. “Districts should be drawn so that representatives can contemplate a spectrum of issues and be willing to work with both parties.”

“This district, as it was drawn ten years ago, packed MD-1 in such a way that only the most radical Republican could win a primary,” she said.

Mason likewise urged lawmakers to draw a more competitive 1st District at the meeting, and also noted the vast geographic size of the district as it’s currently drawn, comparing it to “two Delawares.”

“Both regions have the same economic and environmental interest in protecting the Bay,” Finn said.

Paul Berman noted that Gov. Lawrence J. Hogan Jr. (R) has said he wants the planned third span of the Chesapeake Bay Bridge to be built at the current site.

The congressional map proposed by Hogan’s Maryland Citizens Redistricting Commission (MCRC) keeps the Eastern Shore linked with parts of northern Maryland. That map received high marks from the Princeton Gerrymandering Project for partisan fairness, and Hogan has said he will oppose any maps from the General Assembly that differ from the MCRC’s proposal.

While Hogan could veto congressional maps, Democrats hold a veto-proof majority in both the House of Delegates and the State Senate and have complete control over the redistricting process in Maryland. Lawmakers are set to tackle congressional redistricting at a special session beginning Dec. 6.

Maryland’s current congressional district map was challenged as an illegal partisan gerrymander in federal court and considered by the Supreme Court twice, with justices ultimately decided not to set a standard for what constitutes extreme gerrymandering.