After Maryland’s Legislative Redistricting Advisory Commission released several “concept” congressional boundaries this week, Howard County residents weighed in on their representation at the national — and state — level at a public hearing Wednesday night.

Beth Hufnagel of the League of Women Voters of Howard County thanked commission members for releasing the maps before they wrap up their public hearings later this month, and said panelists should consider deliberating their final congressional map in a public meeting.

“There is still time to have an open meeting where you discuss how you get from your four maps to your single map,” Hufnagel said at the Wednesday evening meeting, which was held at Howard Community College’s Monteabaro Recital Hall of the Horowitz Visual and Performing Arts Center.

The commission was set up by Senate President Bill Ferguson (D-Baltimore City) and House Speaker Adrienne A. Jones (D-Baltimore County) to draw congressional and legislative maps for the General Assembly to consider. The panel is chaired by Karl Aro, a former head of the nonpartisan Department of Legislative Services.

Jay Gerarden, a Howard County resident, said the commission should still consider the congressional map drawn up by the Maryland Citizens Redistricting Commission, a multi-partisan panel created by Gov. Lawrence J. Hogan Jr. (R) to craft the redistricting proposal that he will propose to the General Assembly. That panel wrapped up its work earlier this month.

The Maryland Citizens Redistricting Commission’s proposed congressional map minimizes county splits and includes all of Howard County with most of Anne Arundel County in a single congressional district.

“It’s much, much, much cleaner,” Gerarden said of the Maryland Citizens Redistricting Commission’s congressional proposal.

Hogan has said he would oppose maps that diverge from the Maryland Citizens Redistricting Commission’s proposal, but the General Assembly, where Democrats hold a veto-proof majority in both the House of Delegates and the State Senate, will have the final say over redistricting. Lawmakers are set to return to Annapolis for a special session to tackle congressional redistricting starting Dec. 6.

The Maryland Citizens Redistricting Commission’s senatorial maps, which are available online alongside their congressional proposal, include eastern portions of Ellicott City with parts of far southwestern Baltimore County before looping down to Elkridge and Jessup along the County border. In current maps, Ellicott City is included in a State Senate district with western portions of the county and a portion of Carroll County, although Ellicott City is largely in its own a single-member delegate subdistrict. 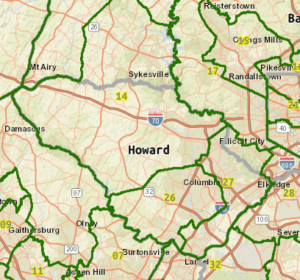 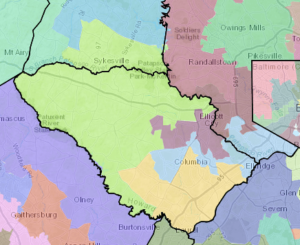 “There’s an awful lot of shuffling around of really significant communities that doesn’t seem to contribute anything to the ostensible purposes of redistricting,” county resident William Adams said.

The Maryland Citizens Redistricting Commission started from scratch when drawing their congressional and legislative maps, but Adams said legislative districts shouldn’t be drastically changed. He said politically active residents have long standing relationships with their representatives.

Others who testified at the meeting were critical of the Maryland Citizens Redistricting Commission’s maps for splitting Ellicott City along U.S. Route 29.

“Here in Howard County, we’re actively trying to smash down the concept of Route 29 as a barrier,” county resident Josh Friedman said.

Shahan Rizvi, a resident of Columbia and chair of the Howard County Democratic Central Committee, was critical of his community being drawn into a single district in the commission’s maps. Columbia is split between two senatorial districts in current maps, and Rizvi said putting the area in a single district would “significantly and intentionally” diminish the community’s voice in the General Assembly.

“It would also condense nearly half of the Black and Latino populations of the county into this district, similarly diminishing the influence of these residents,” Rizvi said.

While the Legislative Redistricting Advisory Commission released concept congressional maps Tuesday, the panel has not yet released legislative maps.

The panel is set to hold a virtual statewide public hearing on Monday, Nov. 15 at 6 p.m.