When President Biden visits the Port of Baltimore to promote the just-passed infrastructure bill on Wednesday, he will get an up-close view of one of the largest ports in the nation — one that is expanding rapidly as it races to compete with other East Coast facilities.

The president’s afternoon visit to Maryland — his second in three weeks — follows congressional approval of a top administration priority, a $1.2 trillion measure that officials say will modernize the country’s roads, bridges, rail, airports, ports and other infrastructure.

Even before supply-chain issues slowed global commerce, many ports were facing bridge and depth limitations and other challenges, the White House said.

“The [American Society of Civil Engineers] warns that ports face extensive challenges modernizing infrastructure and maintaining essential facilities under threat from sea level rise and other climate challenges,” the administration noted in a fact sheet on Tuesday.

“[T]he surge of cargo coming off larger vessels can also strain outdated land-side infrastructure. As a result, more container traffic flows through a smaller number of U.S. ports with the offshore and onshore capacity to handle the largest vessels and their cargo.”

The president is expected to highlight the “unprecedented” $17 billion to improve infrastructure at coastal ports, inland ports and waterways, and land ports of entry along the border, the White House said. Although Biden has yet to sign the measure, which Congress sent to his desk late last week, a senior administration official said Tuesday the government isn’t waiting to take action.

“There’s work going on right now to actually get these projects teed up,” the official said on a background call with reporters Tuesday. Officials spoke on the condition they would not be named.

Port operators are planning to start many programs within 45 to 90 days through a variety of funding streams and policies the bill will provide, the official said.

The administration expects the Port of Savannah, the nation’s third-busiest importer, to be the first to take advantage of a policy change allowing ports to redirect about $8 million in funding to immediately address supply chain challenges, the official said.

In the next three months, the administration will identify $3.4 billion in upgrades to inspection facilities at ports of entry handling international trade. The official said outdated customs inspection infrastructure “has clearly been a bottleneck.”

In addition to the relatively short-term funding, the administration announced plans to help the long-term flow of goods from ports. The bill will provide $110 billion for roads and bridges that the White House said could be “smartly deployed” to ease supply chain congestion.

The Transportation Department and the National Maritime Commission will request proposals to standardize data collection and sharing in the transportation supply chain. Private companies are responsible for most goods movement throughout the country, and don’t have a universal system for collecting and sharing data.

The White House said standardizing data would allow different companies to work together and create “greater transparency, resiliency, fluidity, competition, and efficiency across the supply chain.”

These are boom times for the Port of Baltimore.

A site visit by the House Environment & Transportation Committee in September came two weeks after the arrival of four Neo-Panamax cranes, following a two-month journey from China. 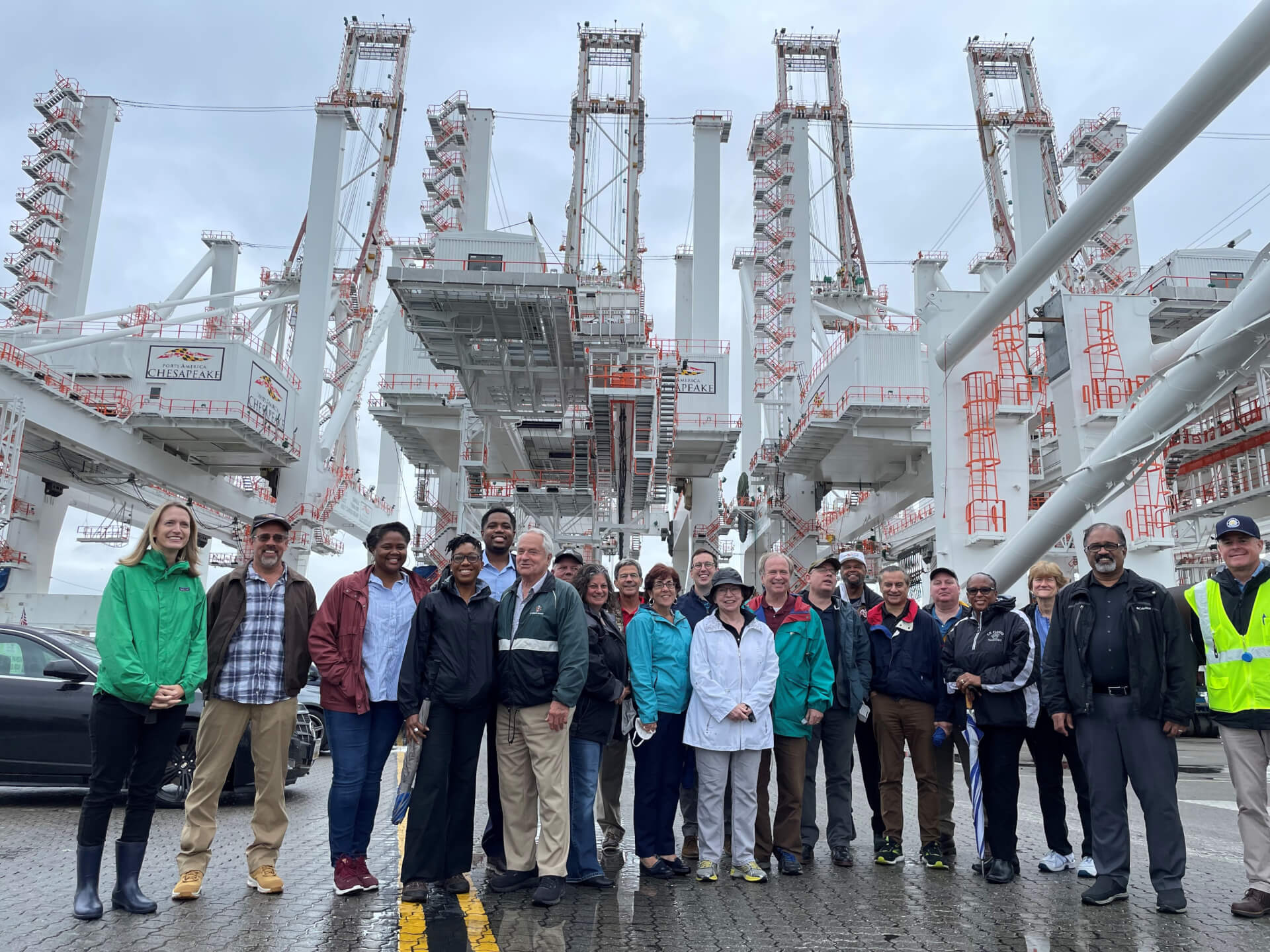 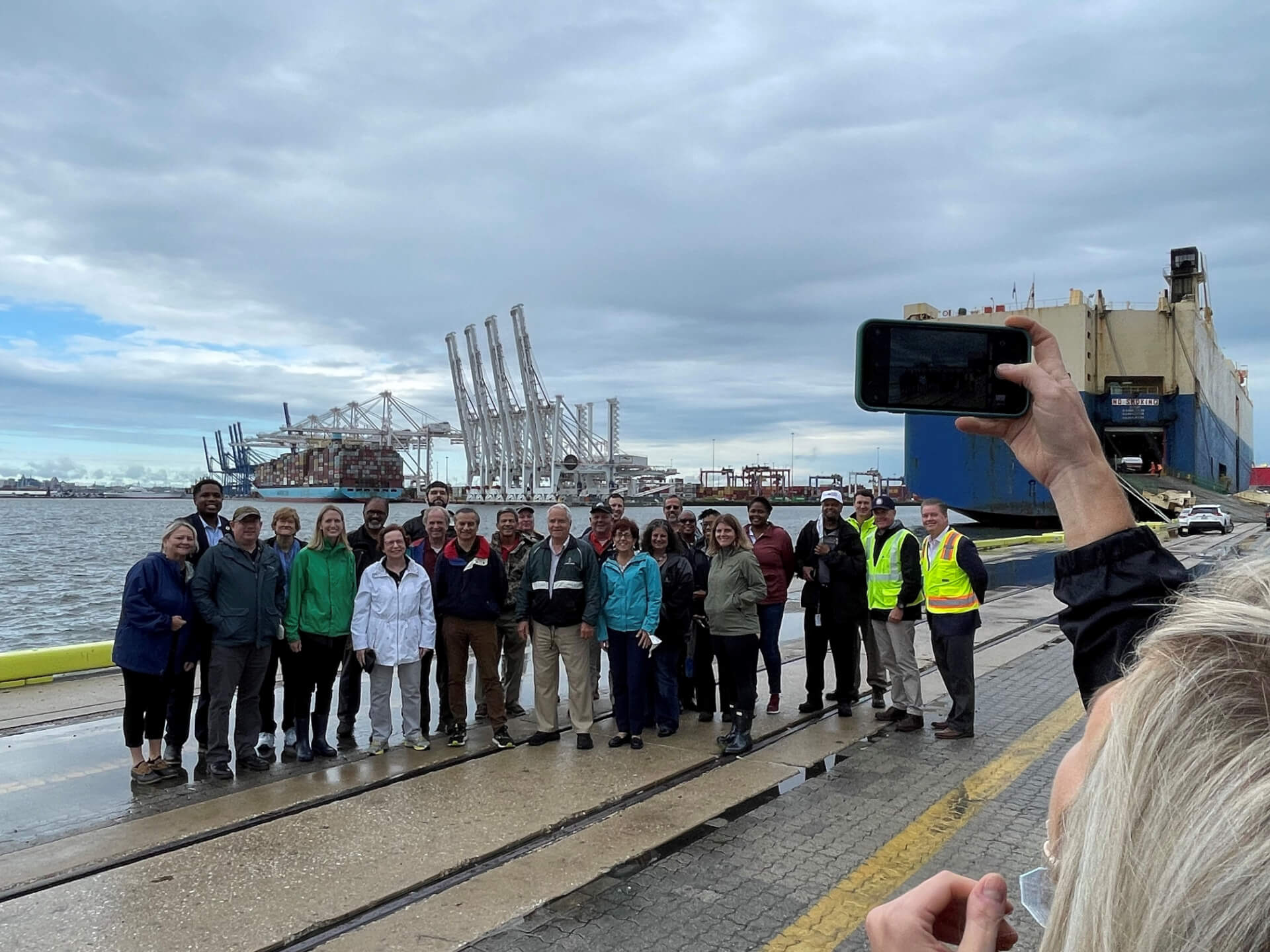 At 450 feet and weighting approximately 1,740 tons, the cranes have greater capacity than those that arrived in 2012. Because of their size, ships bringing them to the port had to wait for low-tide, so the cranes could squeeze under the bridges that cross the Chesapeake.

Ports America Chesapeake, which handles cargo operations at the port, hopes to have them operational in early 2022, an official told lawmakers.

“The expectation is they’ll commission them, they’ll go through some punch-list items, make sure everything’s working properly, and then hopefully we’ll these in operation in January of next year,” said Brian Miller, deputy executive director of the Maryland Ports Administration (MPA).

The 315-year-old Port of Baltimore is the nation’s busiest for cars and light trucks, heavy farm and construction machinery, and imported gypsum. It ranks 10th for total dollar value of cargo and 11th for total cargo tonnage, according to the MPA.

In 2020, the Port of Baltimore’s public and private marine terminals handled 37.3 million tons of cargo — import and export — worth $49.6 billion.

In an interview, Miller said just about everything comes through the port.

“Everything you’re wearing right now, your TV at home, your computer, your furniture, you name it,” he said. “Food, pharmaceuticals, chemicals, everything. Anything you can imagine is shipped in and out of here.”

“This port is very dynamic.”

A second, 50-foot-deep berth will be operational in 2022 and will allow the Port of Baltimore to handle two supersized ships simultaneously.

And the expansion of the Howard Street Tunnel in downtown Baltimore, a major East Coast bottleneck for rail traffic because it’s not tall enough for double-stacked containers, is expected to bring even more freight to the port.

“Every other port on the East Coast — New York, New Jersey, Norfolk, Savannah, Charleston — they all have double-stack,” said Miller. “When we’re able to do that, it’s going to be a game-changer for us.

Committee chairman Kumar P. Barve (D-Montgomery) said he wanted to his colleagues to see the facility for themselves.

“It’s the Port of Maryland,” he said. “Management has so turned this around over the last 30 years. It’s an impressive example of government really doing a great job for the economy.”