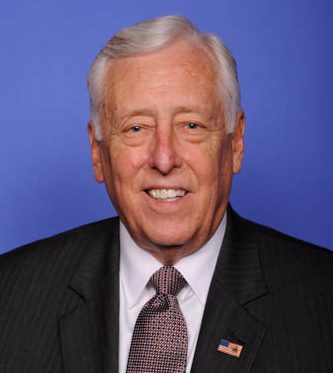 “I’ve seen up close his devotion to his work, to the people of Prince George’s County where he was born and raised, and to the community of Glenarden where he chose to start his family,” Hoyer said in a statement. “Whether as a community organizer, as the Democratic Caucus Chair in the Maryland House of Delegates, or now as a candidate for Congress, Jazz has always fought for our community.”

Lewis is one of two leading Democrats currently competing for the right to succeed Rep. Anthony G. Brown (D), who is running for state attorney general in 2022, in the 4th District. Former Prince George’s state’s attorney Glenn Ivey is also running, as is Gabriel Njinimbot, an IT consultant.

The 4th District, which as currently drawn takes in roughly half of Prince George’s County (Hoyer represents the other half) and part of Anne Arundel County, is a Democratic stronghold.

Until announcing his congressional bid less than two weeks ago, Lewis, 32, had been on Hoyer’s political and/or congressional staffs since 2014, though he has now resigned. Most recently, Lewis served as Hoyer’s senior policy advisor working on a range of issues relating to transportation, health care access, small and minority business concerns, and criminal justice reform.

He has served in the House of Delegates since 2017.

“At a time where integrity and commitment to family, faith, and country is so very important, Delegate Jazz Lewis has those traits in abundance,” Hoyer said. “I’ve known Jazz Lewis and his family very well over the last decade. He is a dear friend, and I can think of no one I would rather have as my partner in representing Prince Georgians in Congress.”

Hoyer’s endorsement of Lewis isn’t surprising given their relationship, but it brings Lewis not only the support of a power player in Prince George’s County for the past half century, but also puts Lewis on the radar of Hoyer’s vast network of political donors and associates.

“As a mentor, he has shown me that leadership is rooted in compassion and an ability to listen,” Lewis said of his former boss. “His support is instrumental in helping us build a winning campaign and one day I hope to serve alongside Leader Hoyer in Congress on behalf of our state and community.”