After years of underuse, a three-acre plot located off Key Highway and across Federal Hill Park in Baltimore was remade into parkland and opened to the public Friday.

Over the last six years, the Waterfront Partnership of Baltimore has worked to transform the small area on the Inner Harbor shore into Rash Field Park, which includes a playground and a pavilion overlooking the waterfront. A café is slated to open in the spring. The park’s most unique feature is a skating area called Jake’s Skate Park, named after Jake Owen, who liked to skate and was killed when he was five by a cell phone-distracted driver.

Although the park is located in the Inner Harbor, politicians stressed that Rash Field Park, one of the city’s 260 parks, was for everyone in the city to enjoy.

“Clean, high quality green space … is essential to ensuring that we develop physically, mentally and emotionally healthy communities, not just in Federal Hill … but across Baltimore,” Mayor Brandon M. Scott (D) said at a ribbon cutting ceremony Friday morning. “The Harbor is for all of Baltimore. Rash Field — this park — is for all of Baltimore.”

Some were already enjoying the park Friday morning. A few toddlers were spotted sliding down a small green hill in the playground, giggling as local politicians and community leaders spoke under the large white pavilion. Several people holding skateboards walked towards the new skate park, and a local skater even gave Scott a lesson after the ribbon cutting ceremony. 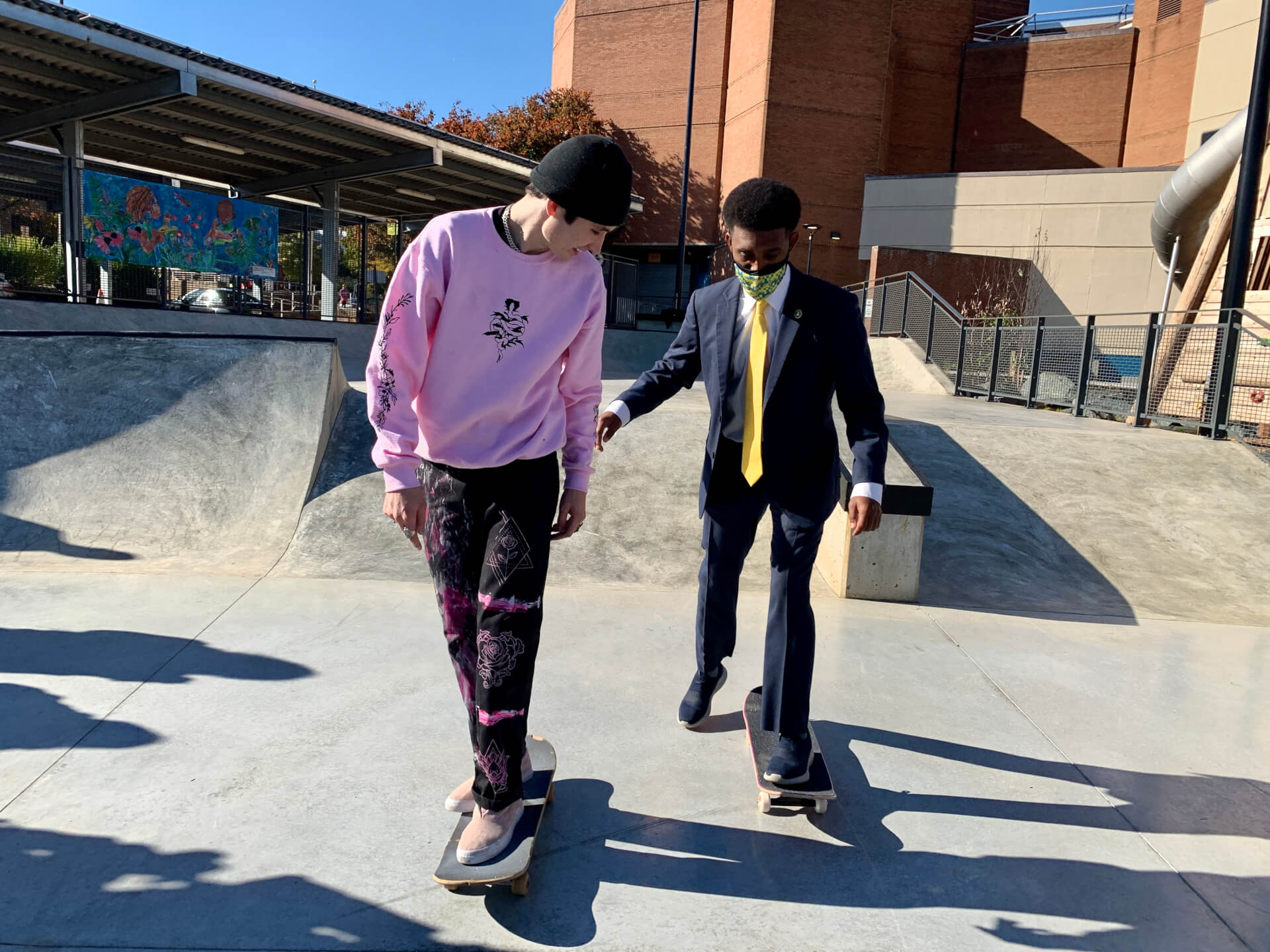 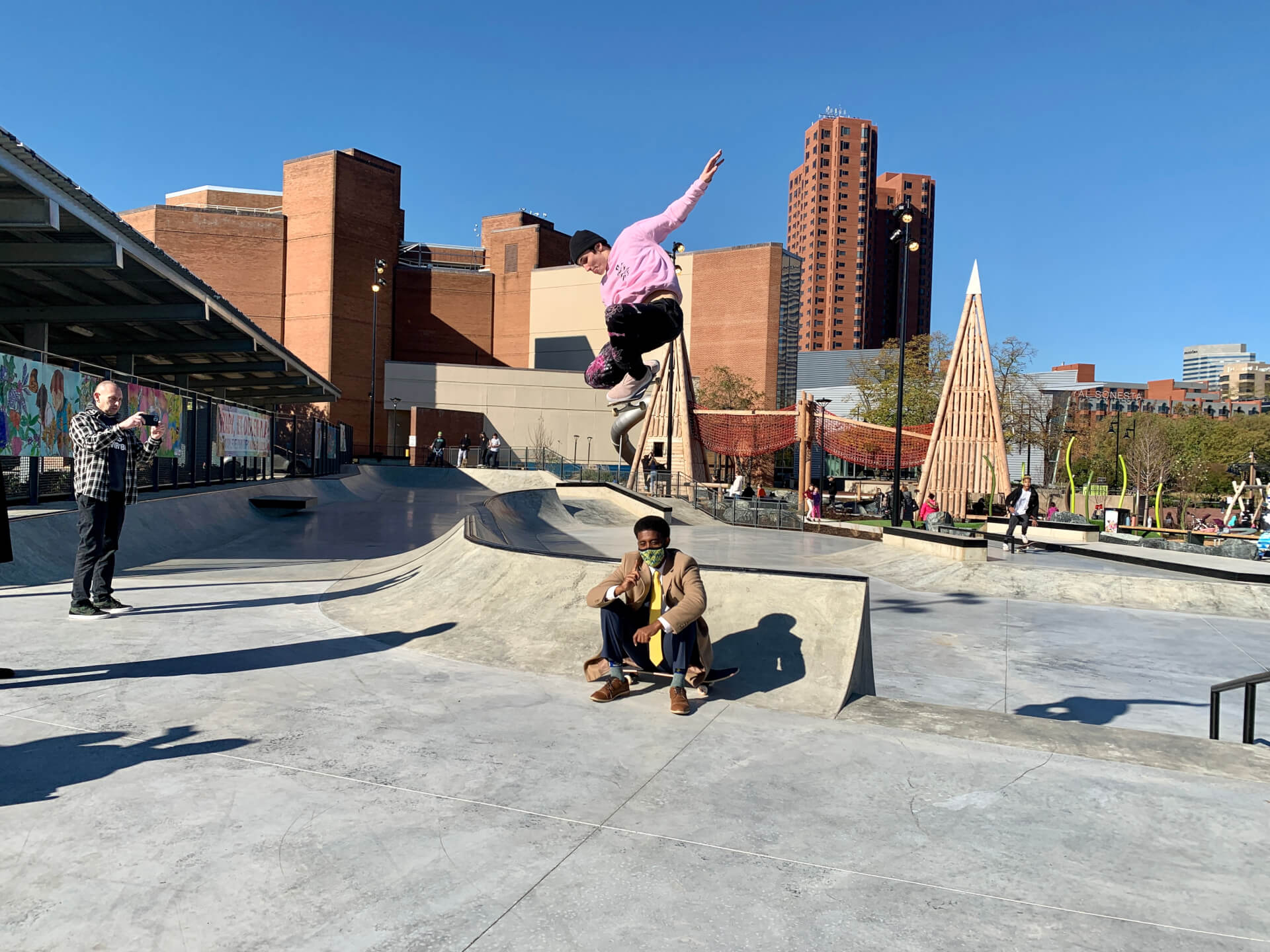 “We were so thrilled to see our vision for Baltimore families come to life today with children of all ages climbing, laughing and playing in the park,” said Laurie Schwartz, president of Waterfront Partnership.

The first phase of the park cost $16.8 million, which the City of Baltimore, state of Maryland and private entities including the Abell Foundation and Baltimore Gas and Electric Company helped pay for. The second phase of the park, which will include volleyball courts, exercise equipment and butterfly and bird gardens, is estimated to cost $14 million, according to Schwartz.

But she did not have a solid timeline on when the park will be complete.

“I’m only just turning my attention to raising money [for the second phase], so once we get the money, it can happen quickly,” she said.

State and local politicians emphasized how Rash Field Park could bring more life to downtown Baltimore, a vital investment for the city’s success.

“This is a major downtown investment,” Senate President Bill Ferguson (D-Baltimore) said. “There is not a city across the globe that has a struggling downtown and a thriving uptown. We must have a thriving, upbeat, energetic downtown in order to create a thriving city.”

In the last month, local park leaders told the State Park Investment Commission, which was established over the summer to address the park visitor surge during the pandemic, that they need much more funding to upgrade out-of-date maintenance equipment and more staff to meet continuing demand.

Frank Lance, the president of the Parks and People Foundation — a non-profit that focuses on ensuring that people from disenfranchised communities have a 10-minute walk or less to a high-quality green space or park — had told the commission that he regularly meets with the director of Baltimore City Recreation and Parks Department to figure out how to make a difference in disenfranchised communities. “But from a funding source, we’re trying to make bricks without straw,” he said.

The State Park Investment Commission is slated to hear from the Baltimore City Department of Recreation and Parks next Tuesday.

When asked why they chose Rash Field to build a new park, Schwartz said the area used to have a small play space but was mostly “underutilized and unsightly.”

“We felt like it wasn’t at the level of what the Inner Harbor should represent,” she said.

However, there are other areas in Baltimore that have a greater need for park access, according to the Maryland Park Equity Mapper, including the area often described as “the Black Butterfly:” the Black neighborhoods in the city’s east and west.

“When you look at Baltimore [on the Maryland Park Equity Mapper], you see it follows the same Black Butterfly pattern, you see the wings on the east and the west and that’s where you have the lowest park equity,” said Jan-Michael Archer, a graduate student at Maryland Institute for Applied Environmental Health who is working on the tool with Maryland Department of Natural Resources.

“It’s not to say that Federal Hill doesn’t need any more green space, but if we’re looking at this in terms of resource allocation and resource prioritization, that is not specifically where I would look to be putting parks,” he said.

Some of the neighborhoods with the most need for parks in Baltimore include Broadway East, Mt. Clare and Fulton, according to the Maryland Park Equity Mapper.

Still, Reginald Moore, the director of Baltimore Department of Recreation and Parks, said Rash Field Park is an “ideal opportunity” because it helps quell the myth that the Inner Harbor is not for inner city kids. “This park is being built for everybody. We want everyone to come out, regardless of where you live,” he said.

“It is important to make sure that kids realize that there are opportunities downtown and to get them downtown to engage in different activities as well,” he continued.

Lance, who is on the board of Waterfront Partnership of Baltimore, echoed that Rash Field Park serves as an economic engine of the city, and could help facilitate park investments in other areas.

“You must fuel your economic engine, which is downtown, and then you also say — we cannot do that at the expense of others, we’ve got to be doing all of it,” he said.

This weekend, Rash Field Park is hosting a number of events to kickstart its opening, including a skate party Saturday morning and yoga and a skate demo on Sunday.