By Ben Brooks and Lorig Charkoudian

The writers are members of the Maryland House of Delegates, representing portions of Baltimore and Montgomery counties, respectively.

This is a critical week for our future.

President Joe Biden is joining leaders from across the world in Glasgow, Scotland for the United Nations Climate Change Conference, also known as COP26, to discuss commitments for addressing our climate crisis.

We have joined with 537 state legislators from 47 states and territories in this letter, calling on the federal government to raise our ambition and strengthen our national climate commitments under the Paris Agreement. The time for action is now, and as the largest historical contributor to greenhouse gas emissions, the United States has a moral and practical responsibility to reach net zero emissions by or before 2050.

Nationally, this year we have seen historic damages from hurricanes and wildfires, droughts and floods, heat waves and cold snaps. In Maryland, scientists have detailed how rising waters threaten shore communities, from Annapolis to Baltimore to the Eastern Shore. Extreme weather wreaks havoc with homes and businesses. Just this past week, we saw shorelines inundated with near-historic high water — something we can expect to see more and more often. Throughout the summer, extreme heat in under-resourced communities put many vulnerable residents at risk.

While major action in Washington has been difficult, states have been at the forefront of climate action while building the new clean energy economy and addressing systemic inequities. But states rely on the federal government to serve as a strong baseline for climate action. And our bold steps can serve as a roadmap for federal action. For example, more than two-thirds of U.S. states and territories, including Maryland, have some form of Renewable Portfolio Standard or Clean Energy Standard, and more than a dozen have committed to 100% clean energy. States are also transitioning fleets to zero-emissions vehicles, making buildings more energy efficient, and protecting natural landscapes to enhance carbon sequestration.

In the 2022 legislative session in Annapolis, we will join many other colleagues to pursue bold climate legislation. We must increase our commitment to net-zero emissions by 2045 and make significant upgrades to the electric grid for massive decarbonization and reliability, including micro-grids to make low-income communities more resilient. We must also make significant investments in low- and moderate-income housing to make them more efficient, which reduces energy use, makes homes safer and lowers utility bills. Finally, we must support new funding to expand our public transit system and move the state toward an all-electric vehicle fleet. These steps will be part of Maryland’s ongoing commitment to meeting the climate challenge.

Time and again, states continue to fill the void of climate action at the federal level. But in this critical moment, we must stand as united states. Together, with strong international, national and state action, we can take the steps that are needed to avoid further climate catastrophes.

That is why we encourage President Biden and Maryland’s representatives in Congress to keep fighting for strong climate action. We hope they will match and enhance our ambition and dedication in every negotiation room. The federal government must lead in committing to and achieving full decarbonization, just as we strive to do so in Maryland and states across the country. 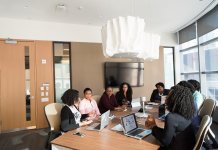 Opinion: Leveraging Philanthropy to Help Cultivate a Pipeline of Women Leaders of Color