The writer is a resident of Petersville in Frederick County and is co-founder of Climate Communications Coalition, Inc.

Governor Larry Hogan’s toll-lane plan made recent headlines with this new finding: “Toll lanes on Beltway, I-270 in Maryland wouldn’t lessen worst evening traffic without other improvements.” The Maryland Department of Transportation released a study on Oct. 1 showing that in some sections of Interstate 495 and I-270, the congestion would actually be worse under the state’s preferred plan than under the no-build alternative. That news directly contradicted the state’s own assertion that “under the Preferred Alternative, all existing [general purpose] lanes … would undergo travel time improvements that would benefit all road users.”

Under Maryland’s recently signed contract with Transurban, the Australian toll road giant is only obligated to build toll lanes south of I-370. The rest of I-270 would only be widened if Transurban finds it profitable — something the state has already admitted won’t be the case based on tolls alone.

Why is Maryland getting involved in a $6 billion dollar, 60-year plan that is “not going to do much to solve the traffic”? The toll lane project would constrain Maryland’s future planning options and worsen existing chokepoints located where the planned toll lanes would end. At the notorious I-270 bottleneck in Clarksburg, even more traffic would have to funnel into the two lanes heading to Frederick. The plan would also make a new bottleneck along the inner loop of I-495 near Old Georgetown Road. Toll lanes that create intractable congestion simply invite more contracts for more toll lanes to “fix” the problems.

Previous MDOT studies, including the 2009 West Side Mobility Study, that evaluated managed lane alternatives were clear that the “physical footprint for all of the alternatives was the same and it included widening for two lanes per direction in Virginia and widening for one lane per direction on the American Legion Bridge and in Maryland. The widening in Maryland was constrained by the right-of-way, proximity to sensitive environmental features, and proximity to adjacent residences.” I-270 also faces similar constraints.

Surely MDOT engineers and contractors can re-deck the structurally sound American Legion Bridge and develop a regional multimodal transportation plan worthy of the 21st century — a plan that creates jobs and stimulates the economy while centering the need for equity, smart growth, and climate awareness. A plan that would actually address and reduce congestion instead of perpetuate and increase it with worse traffic bottlenecks for nearly everyone. Commutes don’t start and end on the toll lanes; the worsened bottlenecks at the ends of the toll lanes would affect everyone — toll lane and general lane users and local road users — as more traffic feeds into and backs up on the connecting arterial roads.

The Supplementary Draft Environmental Impact Assessment (SDEIS) study MDOT released on Oct. 1 gives a rushed and incomplete look at a project designed for private partner benefit. The study uses faulty traffic modeling — among other traffic-related deficiencies — and does not appear to fully consider the significant decrease in congestion on I-270 resulting from MDOT’s own ongoing Innovative Congestion Management project.

Governor Hogan and MDOT appear to be ignoring current realities and the public interest in their accelerated timetable to appease an Australian toll lane giant and build $50 toll lanes for the few who can afford to pay. Common sense and the state’s own studies show this problematic plan needs more than a makeover; it needs a do-over. 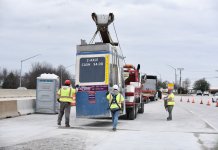