One candidate is 32 years old and has a hip, New Age-y first name. He once worked as a community organizer and speaks the language of the modern-day racial justice movement.

The other candidate is a 60-year-old Harvard Law School graduate who has worked at the highest echelons of power on Capitol Hill, held a powerful appointed post in Maryland state government, served two terms in countywide office, and is the patriarch of a potent local political family.

So naturally, the kid appears to be the insider, establishment candidate in the quickly-developing race to replace U.S. Rep. Anthony G. Brown (D), and the graybeard is the insurgent.

Just consider the state political news of the past 10 days:

The ambitions of Davis, Lewis and Anderson-Walker, not to mention former Del. Erek L. Barron (D-Prince George’s), who only recently became U.S. attorney for Maryland, have down-ballot implications heading into 2022. On top of that, there’s the ongoing dysfunction at the Prince George’s Board of Education, controversy over the proposed map for new county council districts, and several fascinating races for legislative and local offices already on tap. And the county’s robust Democratic voter rolls are a major prize in the statewide primaries.

In other words, Prince George’s County is once again the center of the political universe.

The irony of all of this was that County Executive Angela D. Alsobrooks (D) was supposed to be the catalyst for change; many people expected her to be a candidate for governor next year — and a damn strong one, too. But instead she has decided to seek reelection, stymieing the ambitions of other Prince George’s leaders, chief among them State’s Attorney Aisha N. Braveboy (D) and County Council Chair Calvin S. Hawkins II (D), who imagined they might replace her.

But nothing is ever quite what it seems in Prince George’s, and trying to follow the players without a scorecard is a hopeless exercise. Sometimes even with a scorecard, the politics of the moment are confusing and counterintuitive.

Which brings us back to the fledgling congressional race. Ivey has been well-liked and well-respected in Maryland political circles for decades. He was a staffer to Maryland’s late U.S. Sen. Paul S. Sarbanes (D) and also worked for former U.S. Senate Democratic leader Tom Daschle of South Dakota, along with the late Michigan congressman John Conyers (D).

Ivey was appointed chairman of the Maryland Public Service Commission and was touted for years as a rising political star in Maryland with an unlimited future. Ivey eventually did run for office, spending eight years as Prince George’s State’s Attorney, from 2002 to 2010. But his two subsequent attempts to make it back to Capitol Hill, as a member of Congress, fell short.

In the interim, Ivey has seen the political fortunes of his wife, Jolene, and son, Julian, rise. Jolene Ivey spent eight years in the House of Delegates, ran unsuccessfully for lieutenant governor, and then made a political comeback by being elected to the county council in 2018. That same year, Julian Ivey, who had been a town council member in Cheverly, was elected to the House in the district his mother once represented. Glenn Ivey returned to practicing law.

So how is it that Ivey might be seen as the renegade and the insurgent in the congressional primary with Jazz Lewis? In part, it has something to do with his family’s political associations and alliances.

Recently, Glenn Ivey has been serving as the attorney for some of the progressive elected members of the Prince George’s County Board of Education in their epic battles with the board members who were appointed by Alsobrooks. These days, Jolene Ivey often finds herself in opposite political camps from Alsobrooks and the county council majority, while Julian Ivey is proudly on the left flank in the Maryland House, and close with some of the other rebellious young progressive leaders in the county.

Lewis, while fashioning a progressive record in the legislature, including sponsoring some key elements of the police reform legislation that is slowly becoming law, is seen in some circles as the insider candidate in that race. That’s largely due to his association with Congressman Steny H. Hoyer, the U.S. House majority leader and decades-long Prince George’s powerbroker.

Lewis has been on Hoyer’s political and/or congressional staffs since 2014, and he was serving on the Prince George’s Democratic Central Committee when there was a vacancy in the 24th legislative district in 2017 and he won the appointment. Lewis also has risen through the ranks of House leadership at a very rapid clip, and is chair of the Democratic Caucus.

Make no mistake, Lewis and Ivey are both smart and admirable guys who would make fine members of Congress and whose records undoubtedly would be very similar. What will sway this race is a series of intangibles and political factions that are hard to map out this early in the campaign. And they may not be the only candidates — as rumors swirl that two former occupants of the seat, ex-Reps. Donna F. Edwards (D) and Albert R. Wynn (D), are at least testing the waters for possible comebacks.

It’s safe to say that plenty of people are still getting over the shock of Brown busting out of Congress at the first possible opportunity and announcing for the attorney general’s race so quickly. Brown says being AG has always been a dream of his, and we’ll take him at his word. 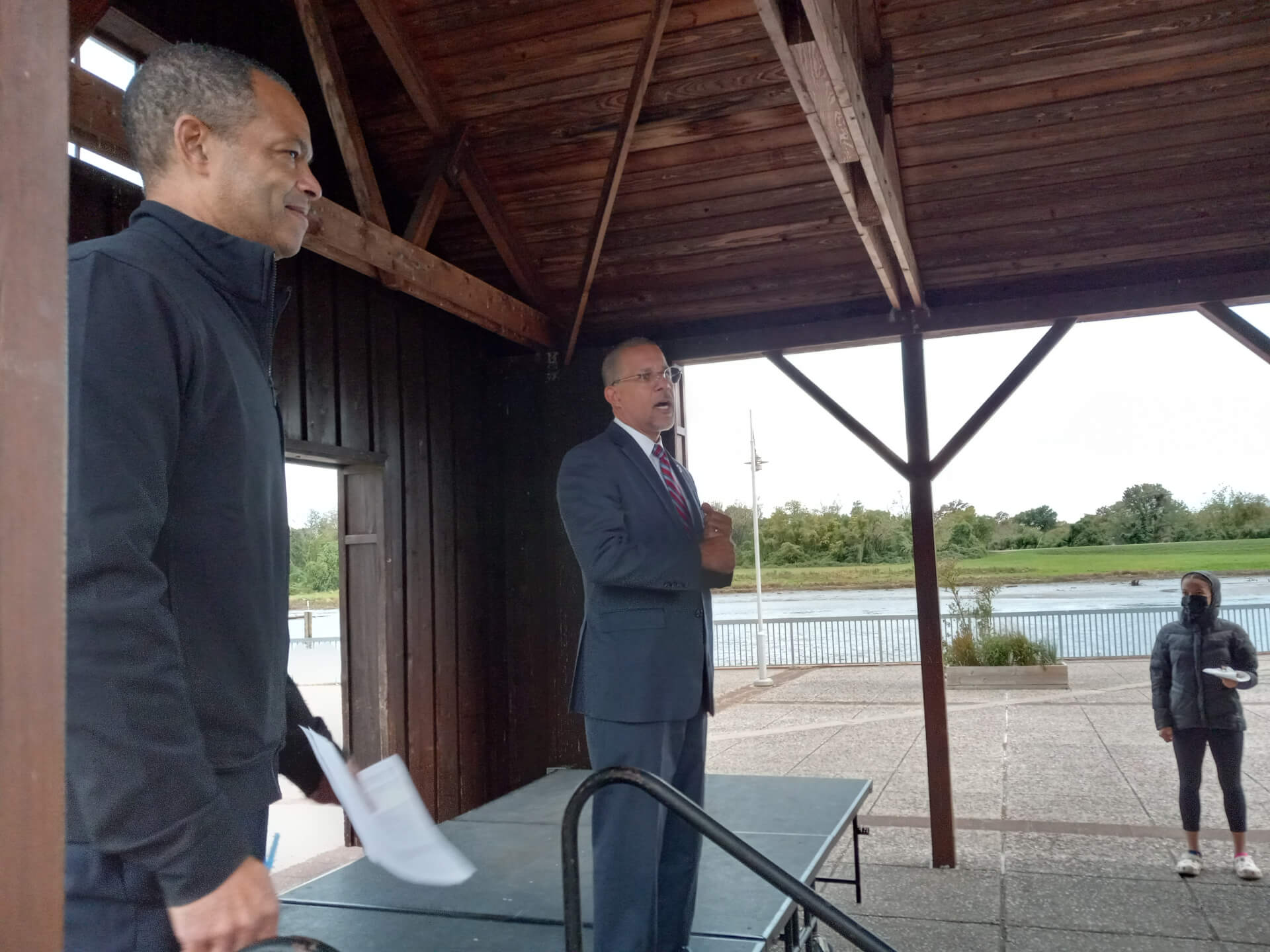 But his eagerness to move on from Capitol Hill is palpable and, with it, the reminder that Democrats’ prospects of holding on to the House majority in 2023 are next to nil. Brown was a solid member of Congress, and his surprise defeat at the hands of Republican Lawrence J. Hogan Jr. in the 2014 gubernatorial election humbled him and made him a better public servant.

But with his quick entry into the attorney general’s race, and his attempt to elbow aside any opponents, Brown is behaving a little more like the entitled frontrunner he was when he was serving as lieutenant governor and gearing up to run for governor. He will have to lay out a vision for why he wants the job, beyond platitudes.

The most recent skirmish took place Thursday evening, when the Prince George’s Democratic Central Committee nominated one of their own, Faye Martin Howell, to replace Barron. She was also the choice of the district’s senator, Joanne C. Benson.

LaTasha Ward, a youth counselor and community activist who finished fourth in the Democratic primary in the district in 2018, also applied for the vacancy, but was rebuffed. Ward is one of several candidates prepping to run for the seat next year, including campaign strategist and political provocateur Richard DeShay Elliott, and Christopher Stevenson, a public health advocate who works for 1199SEIU, the health care workers’ union.

With Barron gone and Lewis running for Congress, that creates a string of opportunities in the 24th district. The only incumbent House member seeking reelection there, is Del. Andrea Fletcher Harrison, who previously served on the county council.

Benson, who has been the senator since 2011 and previously served five terms in the House, plans to seek reelection next year, even though she will be 81 years old. She may face a primary challenge from former Del. Tiffany Alston, who ran against her in 2018. Alston, you’ll recall, was removed from office in 2012 following two separate indictments.

The central committee will also have to pick a replacement for Davis, assuming, as most people do, that he will wind up as state treasurer by the beginning of next year. The frontrunner to take his seat is Kent Roberson, who conveniently happens to be the new chair of the central committee. The previous central committee chair, Cheryl S. Landis, was just appointed to fill a House vacancy in District 23B.

This is just the beginning: There will be hard-fought primaries in multiple legislative and county council districts that will test political networks, alliances and egos, and many more surprises around the bend. And all of this taking place without the influence — some would say meddling — of the ultimate Prince George’s Democratic powerbroker, Thomas V. Mike Miller Jr., for the first time in more than half a century.