Dawn Luedtke, an attorney and civic activist and wife of state House Majority Leader Eric G. Luedtke (D-Montgomery), announced Thursday that she plans to run for a seat on the Montgomery County Council.

Luedtke is preparing to run in the newly-drawn District 7, which takes in northeastern Montgomery County. A proposed new council map, drafted by a nonpartisan commission to include two extra districts approved by the voters, is in the hands of the county council, with final approval likely in November.

Other Democratic candidates have recently announced their plans to seek council seats in Montgomery, including William Roberts in District 2, and Scott Goldberg, who is running for an at-large seat.

Luedtke is an attorney who started in private practice as a plaintiffs’ attorney and later worked in the state attorney general’s office. 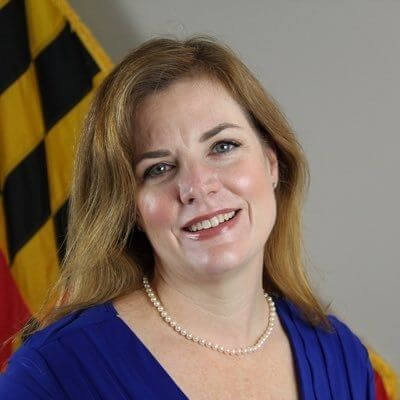 “Every day I ask myself what I have done to help, what am I doing that makes a difference in the lives of those around me,” she said in a statement Thursday. “I can think of no better way to assist with positive progress for our community than to serve on the Council. I believe I bring a passion and a skill set that will benefit the work of the Council, the work of the people, and strengthen our community.”

Luedtke said she will hold a formal announcement event in December. She has filed for a seat in the currently-drawn Council District 4, but now that the county’s redistricting commission has finished its work, she — and presumably some other candidates — will shift their focus based on the final district lines.

The district where Luedtke proposes to run takes in Upcounty communities like Montgomery Village, Olney and Damascus.

The proposed map also creates a district in the southwestern part of the county, most closely resembling the current District 1, that would take in Chevy Chase, Bethesda and Potomac. Another district, similar to current District 3, would include Rockville and Gaithersburg. Another district would run west from Takoma Park, take in downtown Silver Spring, and extend to North Bethesda. Another proposed district would cover the northwest part of the county, including North Potomac, Poolesville, Germantown and Clarksburg. A sixth proposed district, most closely resembling the current District 4, would run from Forest Glen to Wheaton, then take in Glenmont, Aspen Hill and Derwood. And the final proposed district would take in such northeastern Montgomery County communities as White Oak, Burtonsville and Colesville, though it extends south to the Four Corners region.

In recent days, Roberts, a civil rights attorney who is currently a top official at the Center for American Progress and previously was legislative director for U.S. Rep. Jamie B. Raskin (D-Md.), announced his intention to run for the open District 2 seat — the Poolesville/Germantown district.

“My experience and training gives me a strong grasp of the opportunities and challenges ahead and the leadership our county needs to meet this moment,” he said. “As we begin to recover from the pandemic and chart our course forward, Upcounty residents deserve a trusted and tested problem solver who can bring a new vision and experienced perspective to the Council to serve us.”

Roberts will face off against Marilyn Balcombe, the president of the Gaithersburg-Germantown Chamber of Commerce, in next year’s Democratic primary, though other candidates could get in the race. Balcombe ran in the impossibly-crowded at-large council primary in 2018, finishing fifth in a field of 33 candidates. The seat is being vacated by Councilmember Craig Rice (D), who is term-limited.

“We live in a place with such an abundance of resources but year after year we never seem to get ahead of school overcrowding, sitting in traffic, a scorching climate, and lagging behind our neighbors in job opportunities for our citizens,” Goldberg said. “I’m confident I can bring my experience, ability to collaborate, and optimism to the council to make people’s lives easier.”

Goldberg is one of seven Democrats currently filed for the election for the four at-large council seats — a field that currently includes two incumbents, Councilmembers Gabriel Albornoz (D) and Evan Glass (D). Also filed to run: Brandy H.M. Brooks, a progressive activist who ran last time; Kim Kellerman, who was inspired to run after losing her job as a lab technician; Laurie-Anne Sayles, a Gaithersburg city councilmember; and Christa Tichy, an electrician.

A third incumbent, Councilmember William Jawando (D), has announced plans to seek reelection but has not filed his candidacy papers, amid rumors that he may be weighing his political options. The fourth incumbent, Councilmember Hans Riemer (D), is termed out of office and is running for county executive. Kristin Mink, a former middle school teacher and progressive activist, also announced plans to seek the seat but hasn’t filed her paperwork.

Editor’s note: This story has been updated to change some of the descriptions of the proposed new county council districts, including the district where Dawn Luedtke plans to run.

The Democratic candidate for governor announced that it is making a six-figure ad buy that will air on network television beginning Wednesday.

Josh Kurtz: Can’t Tell the Players (or the Year) Without a Scorecard