Baltimore County residents and civil rights activists said county council members should reject maps proposed by a redistricting commission at a Tuesday evening public hearing, arguing that the next set of council maps should include at least two majority Black districts.

Civil rights activists and state lawmakers alike have criticized council maps proposed by the Baltimore County Redistricting Commission for “packing” Black residents into a single majority district. The American Civil Liberties Union of Maryland and the Baltimore County NAACP say the commission could draw at least two majority Black districts. The civil rights organizations submitted an alternative proposal to the county’s redistricting commission in September that includes two majority Black districts and a “swing” or “influence” district that included a roughly even number voters who are white and people of color.

Roughly 47% of Baltimore County residents are Black, Indigenous, or people of color, according to the American Civil Liberties Union of Maryland, a figure that has been trending up in recent decades amid growing diversity nationwide.

Some who testified at Tuesday’s hearing, including Randallstown NAACP President Ryan Coleman, argued that the county redistricting commission’s maps violate the federal Voting Rights Act. That law prohibits vote dilution by cracking, or “fragmenting the minority voters among several districts where a bloc-voting majority can routinely outvote them,” according to the U.S. Department of Justice, or by “packing them into one or a small number of districts to minimize their influence.”

“The fourth district has over 72% African Americans in the district,” Coleman said. “This really illustrates the concept of packing, which is illegal.”

“One majority Black district was sufficient in 2001, but 20 years later, that is no longer the case,” Justin Nalley, a policy analyst for the ACLU of Maryland, said at the meeting, noting that Black residents make up roughly 30% of the county’s population. 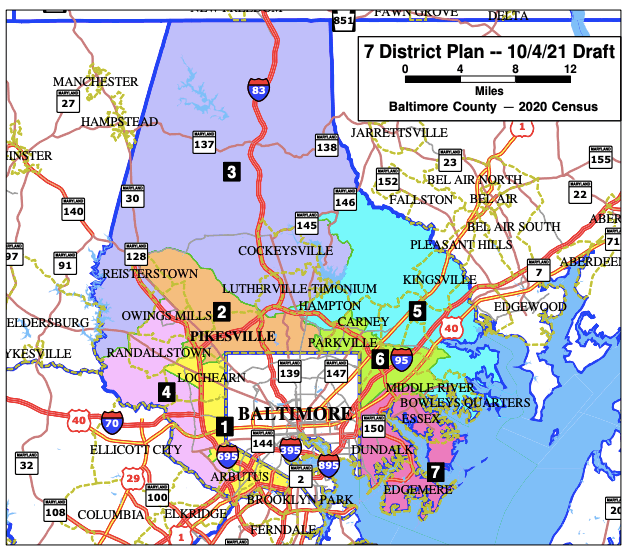 Sonia Shah, a Baltimore County resident and author, said that districts with Black and Brown majorities “would allow all of us to fully participate in the policing, housing, educational and other policy decisions that shape our lives, not as small and marginal minorities in most of the districts, but as majorities as well.”

Shah also said the council should hold additional public hearings and town halls on redistricting. The seven-member Baltimore County Council has to approve the next set of council maps with a five-vote supermajority by the end of January, and is required to hold at least one public hearing.

“I believe that this map does not serve the people of Baltimore County,” Shah said. “I do see, however, that it serves the political interests of incumbents. It makes it easier for them to pursue re-election. This is a conflict of interest. And I think the council can rise above it and advocate for the people’s interest and not just their own.”

“The number justifies two districts,” Jones said. “The question has always been: How do you do it? I’m here to tell you that we’re working on it, and we’ll see what we come up with.”

Councilmember Israel C. “Izzy” Patoka (D) likewise said the council would work to “come up with something that may be more palatable for our county.”

Councilmember David S. Marks (R) said he has an “open mind” toward the public’s input.

The county’s redistricting commission said in its final report that “it should be mathematically feasible” to create a second majority Black council district, but commission members wrote that drawing a second district would make other districts less compact. Robert E. Latshaw Jr. (R), the county redistricting commission’s chair, defended the panel’s proposed maps at the hearing, and said the commission wanted to maintain the current majority Black 4th council district.

“It was not easy or practical for us to be able to make two districts where there was a very high majority of African Americans,” Latshaw said.

Gerald Morrison, the first vice president of the Baltimore County NAACP, said the alternative maps proposed by his organization and the ACLU offer “indisputable evidence” that an additional majority Black district can be created.

Some residents of Towson criticized the commission’s map for keeping the community split between multiple county council districts. Lorrie Geiss, the president of the Towson Communities Alliance, said Towson should be kept together with its neighboring communities.

“Keeping Towson together is serving our communities properly,” Geiss said.

Councilmember A. Wade Kach (R) said the commission should view I-695 as a “natural border” in drawing up maps.

Roughly 30% of Baltimore County residents are Black, according to U.S. Census data, and nearly half are people of color, reflecting growing diversity in the county.