Gov. Lawrence J. Hogan Jr. (R) announced on Monday that the Maryland Department of Health has set up an online portal to help Marylanders determine if they’re eligible for a COVID-19 booster shot.

“We have a robust network of vaccination providers, including pharmacies, primary care providers, mobile clinics, local health departments and community health centers, and we have both the supply and the capacity to provide a booster shot to anyone who needs one,” Hogan said at a news conference Monday afternoon.

The governor said that the easiest way to determine booster eligibility is by looking at your vaccine card: Those who received a second dose of the Pfizer or Moderna vaccines at least six months ago or a single dose of Johnson & Johnson two months ago may qualify for a booster.

But to help unsure Marylanders figure out if they qualify for a booster, the state has launched an online portal at covidvax.maryland.gov.

Individuals who access the portal will be asked about which brand of vaccine they received and the date of their first and last dose. 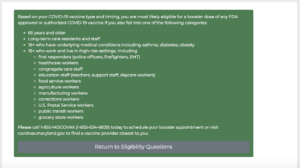 If the date of their last vaccine falls within the category of eligibility, a green box will pop up on the screen with the categories of approved populations.

Thus far, Maryland’s approved populations for boosters include anyone age 65 or older, anyone 18 or older with underlying health conditions and anyone whose job puts them at an increased risk for exposure.

Under public health orders in Maryland, vaccine providers are not allowed to turn away someone who self-attests to eligibility for a vaccine booster.

Maryland Department of Health Secretary Dennis R. Schrader said that those currently eligible to receive a booster shot should schedule one, immediately. Appointments can be made through the vaccine portal or by calling 1-855-MDGOVAX.

The state launched a COVID-19 antibody testing program for vaccinated nursing home patients in late August, which found that nearly 60% of residents had a waning immunity.

Schrader said that this is typical of vaccines, and doesn’t mean that those people are no longer protected.

“What it does mean is that you may need a booster shot to maintain your immunity, and many of us are now at that stage,” Schrader said.

The vaccines may now be mixed-and-matched, meaning individuals are not required to receive the same brand of vaccine they had initially.

Vaccine boosters are all a single dose.

Deputy Secretary of Public Health Services Dr. Jinlene Chan said that Marylanders would get the vaccine that is most convenient for them.

“The most important thing is that they get boosted,” she said.

Hogan said Monday that the state is in its final stages of preparing to vaccinate kids aged five to 11. Pending final federal approval, 515,000 Maryland children could become immediately eligible for a vaccine as soon as next week.

According to the governor, data submitted to the federal government has shown that the Pfizer vaccine has demonstrated a 90.7% efficacy in symptomatic children.

The state will receive an initial allocation of 180,000 doses for kids in the soon-to-be-approved age group and will be receiving more in the weeks ahead.

Chan said that the federal government will not be setting aside a second dose allocation for children as it had for the adult population.

According to Chan, doses for children will be available through pediatricians’ and primary care physicians’ offices.

Acknowledging the long-existing health inequities brought to light by the pandemic, Chan also said that most jurisdictions have created partnerships between local health departments and school systems to institute school-based vaccine clinics.

Hogan said that vaccines will be made available to Maryland children the day that the federal government gives them the green light to administer them.

“The day they give us the approval, we’ll start,” he said.