“The time is now for the state to fund our front line heroes,” said AFSCME Council 3 President Patrick Moran at a rally held Wednesday at State Center, a complex of state government offices in midtown Baltimore. “And we’re here to make it very clear to Governor Hogan and the [University System of Maryland] that they need to fund the front lines and essential services now.”

AFSCME represents over 30,000 Maryland state employees. Among the sea of masked faces in green AFSCME T-shirts gathered at the intersection of Howard Street and Martin Luther King, Jr. Boulevard were representatives from the NAACP statewide conference, the Baltimore Teachers Union, AFT Maryland, the Maryland State and D.C. AFL-CIO and the No Boundaries Coalition, all pressing Hogan to invest money from the surplus in the state’s frontline workers.

“I have one question for you: Who does the work?” Moran asked the crowd.

“We do,” the crowd cheered.

When asked to respond to the rally and the demands of the union, Hogan spokesman Michael Ricci said that the governor already promised a portion of the surplus to “enhancements for state employees.”

Earlier this month, Hogan announced his framework for spending the state’s $2.5 billion budget surplus for fiscal year 2021 by augmenting the state’s rainy day fund, providing tax relief for retirees, expanding on the RELIEF Act of 2021 and releasing emergency allotments of SNAP benefits to eligible households.

Acknowledging that the state was about to move into annual collective bargaining with labor unions, the governor also said that he had advised the Department of Budget and Management to explore new benefits for state workers.

“Hopefully a nice time was had by all,” Ricci said of the rally.

Ruth said that setting aside some of the surplus to support state employees would be an “investment.”

Moran said that the state’s budget surplus came “on the backs of employees.” 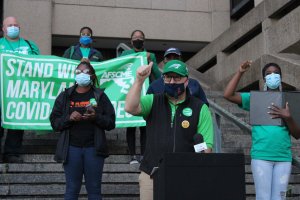 Ashiah Parker, the executive director of the No Boundaries Coalition and AFSCME Council 3 President Patrick Moran and Secretary-Treasurer Cherish Vick at a rally calling on Gov. Lawrence J. Hogan, Jr. (R) to funnel some of the state’s $2.5 billion budget surplus to under-funded and understaffed state agencies. Photo by Hannah Gaskill.

A report released by AFSCME Wednesday detailed that, as of July 1, 2021, Maryland had 5,752 unfilled state government jobs.

This trend isn’t new, but it is worsening.

A 2018 Executive Branch Staffing Adequacy Study from the Department of Legislative Services found a need to fill 2,631 vacant state government positions across 11 departments. One reason for these vacancies was low and uncompetitive levels of compensation.

According to the 2018 study, the state was attempting to make up for these vacancies by putting contractual employees in full-time positions, outsourcing jobs to the private sector and assigning employees with administrative tasks.

Ultimately, the Hogan administration ended the 2018 fiscal year with a budget surplus of $503.8 million, which AFSCME’s report says was “was more than enough money to address the staffing crisis within state government.”

“Our state agencies are in a staffing crisis because of the thousands of vacancies that the governor has let grow during his term,” Moran told the crowd Wednesday. “Five thousand vacancies is an embarrassment in the richest state in the nation.”

Diane Williams, a member of AFSCME Local 1535, has worked for the the state for 19 years, 13 of which she has spent at the comptroller’s office as a revenue specialist. She said that Maryland is losing state employees to more lucrative opportunities at a rapid clip and can’t recruit new ones fast enough.

She also said the pay is too low.

“I know my job is important, but after almost 20 years — and maybe some of you after 20 years — can you guess what we take home for pay?” she asked the crowd. “$15 an hour. That’s a shame. That’s hard to live in Baltimore City is even harder and in the state of Maryland.”

“We are not asking for the moon,” Williams continued. “We’re just asking for living wages.”

Some state employees are still earning less than $15 an hour.

“There are thousands of us who have been left behind because of the lack of regular increase [in pay],” she said. “The cost of everything around us is going up, but our wages are not.”

“These poverty wages have got to go,” Webb said.