Maryland’s offshore wind economy is developing at an accelerated pace.

The latest evidence was an announcement Thursday that Ørsted Offshore North America, one of two companies that are expected to build wind energy projects off the coast of Ocean City, reached a $70 million agreement with a steel company in Federalsburg to fabricate steel for turbine components.

The components would be used on turbines for Ørsted’s proposed Skipjack wind development, which is likely to be built off Ocean City, and for two of the company’s projects off the New Jersey coast. They would also be used for a proposed second wind energy development off the coast of Maryland, which is currently being vetted by the state Public Service Commission.

Gov. Lawrence J. Hogan Jr. (R) and a host of other state and local officials, business leaders and environmental groups, were on hand for the announcement at the Crystal Steel Fabricators Inc. plant in an industrial park near Marshyhope Creek in Federalsburg. Hogan called it “an exciting day.”

Click here to read more from our Climate Calling series.

“Ørsted is a cutting-edge company that has made it their mission to create a world that runs on green energy, and they are progressing toward that goal by continuing to invest in Maryland,” he said. “I am confident our state will continue to be a prime location for offshore wind development, and I want to thank both Ørsted and Crystal Steel for playing a key role.”

This is just the latest announcement about Maryland businesses that are poised to benefit from the fledgling offshore wind industry. Earlier this month, Ørsted announced that it would build a $20 million emissions-free offshore wind operations and maintenance facility on Harbor Road in West Ocean City. And in August, the second company to gain state approval to build a wind energy development in federal waters off Ocean City, US Wind, made a splashy announcement that it would expand operations in Maryland and open its own steel plant at the Tradepoint Atlantic industrial development in Baltimore County.

The Tradepoint Atlantic blueprint, to a great degree, depends on US Wind’s expansion plans being approved by local, state and federal regulators — a process that could take years. In an act of subtle gamesmanship, Ørsted executives boast that their project in Federalsburg can begin immediately, and in fact, Hogan and his Commerce secretary, Kelly M. Schulz, both joked Thursday that they would try to exit the plant quickly so as not to impede progress.

The agreement signed between Ørsted and Crystal Steel means the steel company will be able to hire up to 50 new workers — machine operators, welders and steel fitters — which would increase its workforce in Federalsburg by about one-third and pay “substantial wages,” according to William Lo, president and CEO of the minority-owned company. 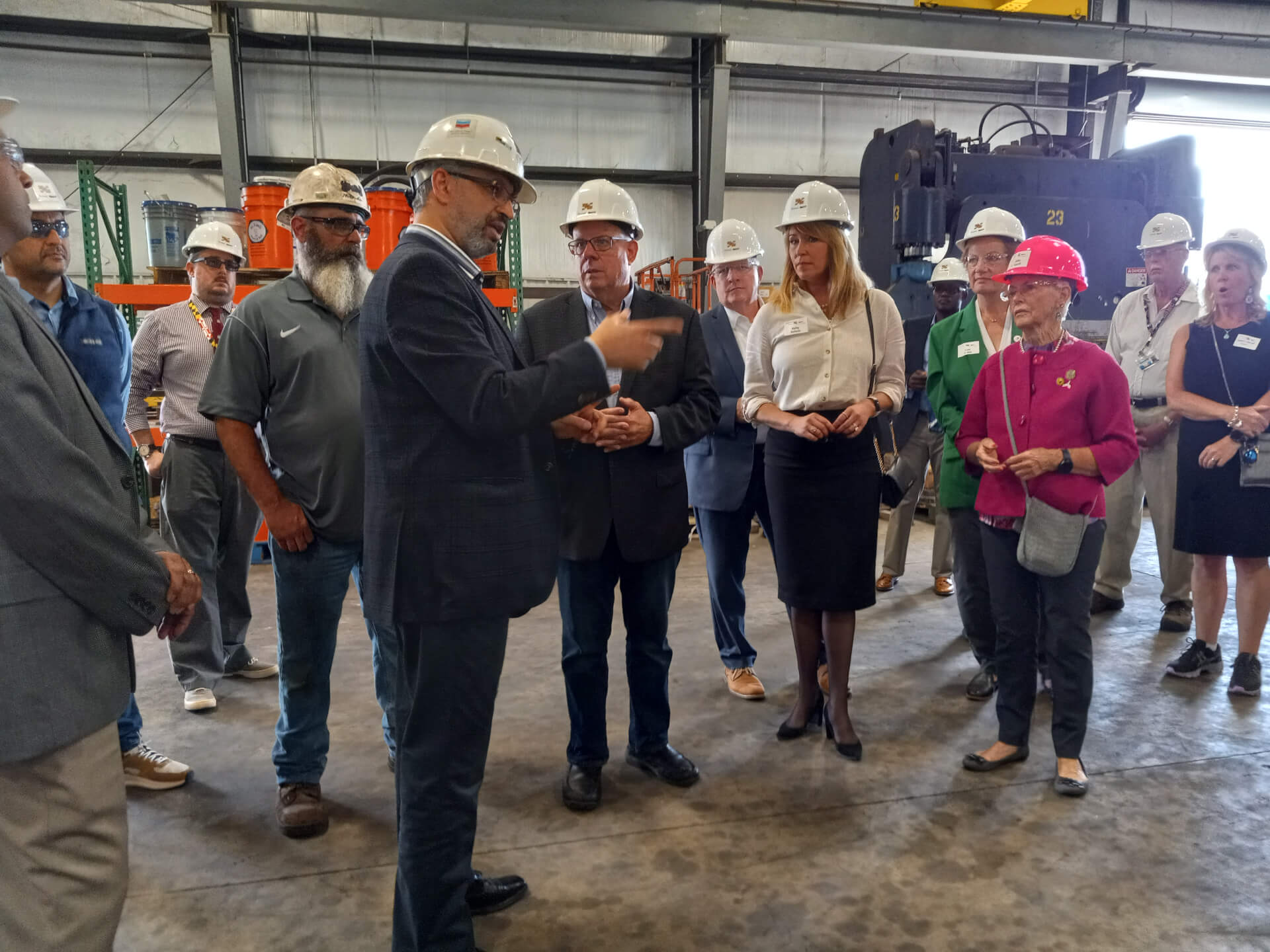 Before announcing the deal, Hogan and other dignitaries toured the Crystal Steel facility, seeing where different phases of component work would take place. Later, two welders symbolically fused the corporate logos of the two companies together onto a steel map of Maryland.

Local officials said that the steel plant, located in one of several industrial parks that are popping up in the mainly agricultural Eastern Shore, are injecting much-needed financial capital into the area and are a major source of job growth.

“You wouldn’t believe all the activity that’s going on over here,” Del. John F. “Johnny” Mautz IV (R-Middle Shore) said in an interview.

State Sen. Adelaide C. Eckardt (R-Middle Shore) referred to several companies in the area as “family,” and welcomed as Ørsted as “our new family.”

In contrast to the Tradepoint Atlantic event at Sparrows Point, an iconic former industrial area along the Baltimore County waterfront, which also included Hogan and other dignitaries, an environmental leader was invited to speak in Federalsburg on Thursday.

Kim Coble, executive director of the Maryland League of Conservation Voters, noted that her organization works to hold elected officials accountable, but said it was fitting that she could offer praise and congratulations for Thursday’s announcement. “We have a lot to celebrate.”

Coble said that in addition to the boost the Ørsted-Crystal Steel agreement gives to Maryland’s clean energy goals, she was also pleased that Ørsted is planning to build the first zero-emissions maintenance facility in West Ocean City and is adding air filtration technologies to the Crystal Steel plant to protect workers.

Both Ørsted and US Wind are awaiting final federal government OK for their projects off Maryland’s coast — though their approval seems almost inevitable, given the Biden administration’s push to exponentially increase the number of clean energy projects being built across the nation. Earlier this week, U.S. Interior Secretary Deb Haaland said the administration aims to offer leases for offshore wind energy development everywhere off the U.S. coast by 2025.

In 2017, US Wind and Ørsted were granted leases from the Maryland Public Service Commission, which is serving as the agent for the federal government, for the first phase of the Interior Department’s lease areas off the coast. Earlier this year, the two companies applied to win the contract for another lease area near Ocean City. The PSC has promised to decide on the bids by mid-December.

Last month, Ørsted filed a complaint with the PSC seeking to disqualify US Wind for the second phase of leasing, questioning the timing of when US Wind would begin utilizing clean energy credits from the state. But last week, the PSC rejected the Ørsted complaint, concluding “it would be inappropriate to grant [Ørsted’s] Motion to Disqualify at this time.”

Nancy Sopko, director of external affairs for US Wind, said an independent consultant for the state has determined that the company’s project off the Ocean City coast was best equipped to protect ratepayers and would cost less than its rival’s.

Both companies hope to have the first phases of their Maryland projects running by the middle of this decade.

State elected officials and business leaders are largely committed to boosting the offshore wind industry in Maryland. Opposition remains in Ocean City, where some political leaders, business owners and real estate agents believe the presence of wind turbines a dozen miles or more from the beach resort could hurt the tourism industry and depress housing values.