Roughly 47% of Baltimore County residents are Black, Indigenous, or people of color, according to the American Civil Liberties Union of Maryland. That number has been trending up in the county in recent decades, reflecting growing diversity across the United States, but advocates say maps proposed by the Baltimore County Redistricting Commission “pack” Black residents into a single majority district, diluting their voting power.

White residents make up a majority in four districts and a strong plurality — 46% and 49% — in the remaining two districts, according to the commission’s final report.

The seven–member Baltimore County Council has to approve those maps with a five-vote supermajority by the end of January, and are required to hold at least one public hearing on the maps before voting. But prominent state lawmakers from Baltimore County, alongside civil rights activists, say the council needs to draw up new maps that include at least two majority Black districts.

Sen. Charles E. Sydnor III (D-Baltimore County) said the proposed map violates the federal Voting Rights Act, which bans minority vote dilution by cracking, or “fragmenting the minority voters among several districts where a bloc-voting majority can routinely outvote them,” according to the U.S. Department of Justice, or by “packing them into one or a small number of districts to minimize their influence.”

Sydnor said that, by drawing up a single district that includes more than 70% Black residents, their voting power in other Baltimore County Council districts is weakened.

“This proposed map is poised to pull the proverbial rug from under the feet of BIPOC communities,” Sydnor said.

“The current map guarantees … not more than one minority council member,” Kelley said.

Caylin Young, public policy director for the ACLU of Maryland, said the map proposed by the county’s redistricting commission will disempower Black voters, who make up roughly 30% of the county’s population.

“This will have an effect that marginalizes their voices, their needs and their concerns,” Young said.

“It continues a racially motivated practice of diluting African American voting strength by packing voters into one super majority-minority district,” she said.

The ACLU of Maryland and the Baltimore County NAACP submitted an alternative proposal for council maps to the county’s redistricting commission. That plan included two majority Black Districts and a “swing” or “influence” district that included a roughly even number of white and BIPOC voters, according to a Sept. 29 ACLU release.

The county’s redistricting commission pushed back on creating a second majority Black district in its final report, although that report notes that it “should be mathematically feasible.” Commission members argue in their report that drawing a second district would make other districts less compact.

Robert E. Latshaw Jr., the county redistricting commission’s chair, said in an interview Monday that he felt making two majority Black districts with a slim majority rather than a large majority would make it less likely for a Black candidate to be elected to the county council, since not all residents register to vote and not all registered voters turn out on election day.

Peta Richkus, speaking on behalf of the Towson chapter of the grassroots progressive advocacy group Indivisible, said there should be more than one public hearing on the proposed maps before the Baltimore County Council votes. Richkus also pushed back on the commission report’s claim that geographic limitations and demographic concentrations preclude the creation of a second majority Black district.

“This is not true,” Richkus said. “The ACLU and NAACP have done exactly that.” 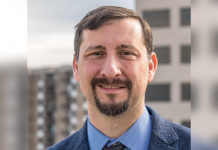