About 47 percent of Baltimore County residents are Black, Indigenous or people of color, according to the ACLU of Maryland, a number which has been trending up in recent decades. Less than half of Marylanders identified as white as of the 2020 Census, following a nationwide trend.

But advocates say the new Baltimore County Council map, which was approved on Sept. 30 by the county’s redistricting commission and still needs to be voted on by the council, violates the Voting Rights Act because it “packs” Black residents into a single majority district and dilutes their voting power. White residents make up a majority in four districts and a strong plurality — 46% and 49% respectively — in the remaining two districts, according to the commission’s final report.

According to an ACLU press release, the next council map “can easily be drawn to provide for two strongly majority-Black districts as well as additional districts in which Black candidates will be competitive.”

The redistricting commission’s report to the Baltimore County Council notes that it “should be mathematically feasible to create another majority-Black district,” but says population distribution and geographical limitations are “critical constraints” on drawing such a district. Commission members argue that drawing another majority Black district would make other districts less compact.

The ACLU of Maryland and Baltimore County NAACP contend that the maps violate the federal Voting Rights Act, which bans minority vote dilution by cracking, or “fragmenting the minority voters among several districts where a bloc-voting majority can routinely outvote them” according to the U.S. Department of Justice, or by “packing them into one or a small number of districts to minimize their influence.”

The ACLU of Maryland and the Baltimore County NAACP submitted their own redistricting plan to the commission, which includes two majority Black districts and a “third ‘swing’ or ‘influence’ district that would include about even umbers of white and BIPOC voters,” according to a Sept. 29 ACLU release. 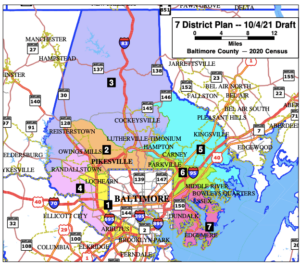 “[T]hese demographic changes also bring with them corresponding responsibilities under the federal Voting Rights Act, in order to ensure that the County’s redistricting process and election system are racially fair, affording all voters — old and new, Black, Brown and white — realistic opportunities to fully participate in the electoral process and to elect candidates of their choice,” a letter attached to the proposal from the ACLU and NAACP reads. “To achieve racial fairness and comply with the Voting Rights Act, the redistricting plan proposed for the County should — to the greatest extent possible — be one that reflects the overall diversity of the County, and that gives residents opportunities to elect their chosen candidates roughly proportionate to their numbers in the population.”

Baltimore County Council members drew up a majority Black council district in 2001 after a push to do so from civil rights advocates, according to the ACLU press release. At the time, no Black person had ever been elected to the Baltimore County Council. Residents of the lone majority Black district have elected a Black council member in every election since, according to the release, while the majority white districts have elected white council members.

“We do not have a history of electing a minority candidate in a majority white district,” Danita Tolson, the president of the Baltimore County NAACP, said in a statement last month. “Therefore, we want to have equal representation in the county resulting in diversity. We feel that the demographics show that there should be two majority-minority districts. Equal minority representation in each district is needed for distributive and social justice.”

The Baltimore County Council will have to approve the map by a five-vote supermajority and is required to hold a public hearing on the map prior to voting.

Josh Kurtz: Speculating on Wes Moore’s team — and keeping an eye on the Senate

Oftentimes, the chatter about the names you hear for key positions are coming directly from the wannabes who wish to serve in the Moore administration or from people who are close to them.