The gunman responsible for the 2018 murders of Capital Gazette employees Gerald Fischman, Robert Hiaasen, John McNamara, Rebecca Smith and Wendi Winters was sentenced to five consecutive life sentences without the possibility of parole for their deaths on Tuesday — three years and three months after the deadly attack.

“The impact of this case is just simply immense,” Judge Michael Wachs said moments before delivering Jarrod Ramos’ sentence. “To say that the defendant exhibited a callous and complete disregard for the sanctity of human life is simply a high understatement.”

Wachs also sentenced Ramos to a life sentence for the attempted murder of photojournalist Paul Gillespie; six consecutive sentences of 25 years for first-degree assault of the survivors of the attack; and 11 sentences of 20 years in prison for 11 counts of using a firearm during a crime of violence. 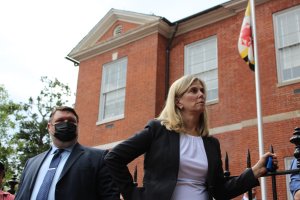 “He didn’t win,” Leitess said at a news conference after the hearing. “He hurt people, but he did not win.”

Leitess said that she believes that “no appeal will be filed in this case.”

In a recent letter to Wachs, Ramos said that he was prepared to receive the maximum sentence.

According to Leitess, Ramos stared her down as he was escorted from the courtroom.

“He thought he had the last word as he left the courtroom,” she said. “But that didn’t work, either, because I looked right back at him. He did not have the last word.”

Ramos pleaded not criminally responsible — Maryland’s version of an insanity plea — for the crimes after he blasted through the glass doors of the Capital Gazette newsroom on June 28, 2018, with the intent of killing everyone present.

He admitted guilt to all 23 charges against him on Oct. 28, 2019. In July, a jury found that Ramos understood the criminality of his actions and should be held criminally responsible and sentenced to prison.

The newspaper became the target of Ramos’ ire following the publication of a 2011 column detailing his guilty plea in a harassment lawsuit.

He filed a lawsuit against the Capital Gazette, its former editor, the columnist, the former high school classmate he harassed and others. After several appeals, his case was dismissed in 2015.

According to Dr. Sameer Patel, a forensic psychiatrist at Clifton T. Perkins Hospital Center who evaluated Ramos after the shooting, Ramos first planned to target the Court of Appeals, which struck down the lawsuit, but decided to instead attack the newspaper after determining the likelihood of his death by armed guards at the courthouse was high.

Ramos spent two years planning his attack on the Capital Gazette, scouting the layout of the office and gathering supplies, police and prosecutors said.

Days before the murders, Ramos rented a car he’d never return, spent his last $1,500 on a lifetime chess club membership, cut his hair and shaved his beard, according to trial testimony.

After killing five staffers, Ramos moved his gun away from his hiding spot, tweeted from an employee’s computer, called 911 to tell them the shooting was over, and hid under a desk until law enforcement arrived, prosecutors said.

‘You cannot kill the truth’

Patel testified during the criminal responsibility phase of the trial that Ramos never planned to escape after the attack was over, and intended to look like a victim.

He also said that Ramos regretted not killing more people that day. 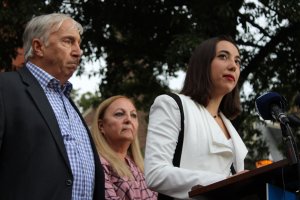 One of them was Selene San Felice.

“Three years ago the defendant in this case said his only regret was not killing me,” said San Felice. “He should still regret it.”

San Felice returned to work the day after the attack, writing stories that she said make people like Ramos mad.

“He killed five people, but no shooter could ever kill this paper,” she said. “Remember this: you cannot kill the truth.”

While the trial may be over, the mourning remains.

“This incident has robbed me of a lot of good mentors and good people that I’ve worked with,” said Capital Gazette reporter and survivor, Rachael Pacella. “I’ve needed to find new mentors and live with the absence of those people in my life.”

Family members of those killed said that major life events are tinged with sadness because the people they love are missing.

Hiaasen’s widow, Maria Hiaasen, said that he called grief “the gift that just keeps on giving.” 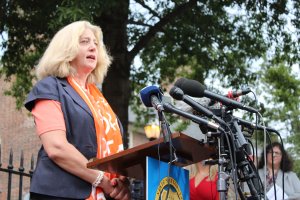 Andrea Chamblee, John McNamara’s widow, mourns for the recognition he received in death that he never got to enjoy in life, like seeing one of his books, released posthumously, with rave reviews from the New York Times and the Washington Post.

“The real victim impact is he’s gone when he deserved to be here,” Chamblee said. “He deserved to see his recognition and enjoy it in his life.”

Rebecca Smith’s younger sister, Cynthia Rittenour, said that she carried her sister’s ashes in her pocket during her college graduation in December 2018.

“I just remember clutching a little urn in my pocket,” she said. “I have to go through so many things alone that I needed my big sister for. Nothing could’ve prepared me for any of it.”

Her mother sent her a text message to thank her.

“I decided to wait until I had time after work to respond,” Winters Geimer said. That was the last time she heard from her mother, who she tenderly called “mommy” as she spoke in court.

“Each celebration is marked by her absence … and each morning I still have to get up with the sun,” she said, with the urn filled with her ashes and an unanswered text message from just before the attack a constant reminder of what has been lost.

“But the legend of Wendi Winters will live on forever,” she said as she stared down her mother’s assailant.

According to prosecutors, Winters charged at Ramos with a trashcan in an attempt to stop the attack before she was shot.

Some family members read personal writings their loved ones left behind. 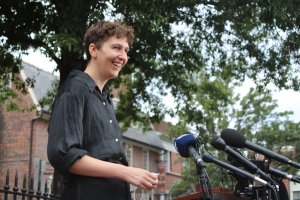 Robert Hiaasen’s youngest child, Hannah, remembered him fondly at a news conference after his assailanrt was sentenced to five consecutive life sentences without the possibility of parole. Photo by Hannah Gaskill.

Hannah Hiaasen, Rob’s youngest child, read aloud from the last page of a journal her dad had written for her between ages nine and 14.

“I supposed I wanted this to be a written record of how much I love you and how you passed a few of these days,” he wrote. “Give me a call. You know I would love to hear from my tall, strong, creative girl. Love you. Dad.”

As she closed her victim impact statement, Erica Fischman, Gerald Fischman’s widow, tearfully read a poem he had written for her on Valentine’s Day 2017. Its final lines said:

“I may not be the smartest person, I may not have charm by the ton, but seeing you is a reminder of the best thing I’ve ever done. I love you each day, honey, from the moment I wake and I’m going to keep loving you until the last breath I take. Yours forever, honey. Valentine’s Day 2017.”

During the news conference, San Felice implored fellow media members to stop sharing his image and stop saying his name.

“It used to feel like a bucket of ice water on my head. It physically hurt me and I would physically shut down,” she said. “And after today — after being able to look him in the face, look him in the eye — I know I won’t feel that way anymore.”

A court-appointed expert witness testified Tuesday, laying out the gunman’s frame of mind before, during and after he killed Capital Gazette staffers Gerald Fischman,…