Cecilia Fenwick has been on home detention for nearly 90 days and the fees associated with her electronic monitoring services have put a strain on her wallet.

“July the 1st, I was released from Baltimore County Detention Center and ever since I’ve been paying my home detention, every piece, every few weeks,” she said during a phone interview Wednesday.

Fenwick was referred to the Baltimore Action Legal Team (BALT) to help her pay up to $243 for her home monitoring service every few weeks.

Iman Freeman, the executive director of BALT, said the program Fenwick joined was launched after a public defender reached out to see if BALT would allocate some of their bail funds to help a client afford home detention at the beginning of the pandemic.

“We started with that client and then, eventually, it ballooned into something that we were not prepared for,” Freeman said during a phone interview.

Since then, BALT has spent $197,243 on home detention with one of two electronic monitoring companies that service Baltimore. 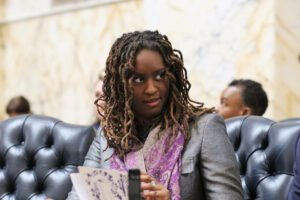 Del. Stephanie Smith (D-Baltimore City) sponsored a bill during the 2021 session that requires the state to use federal pandemic relief funding to pay electronic monitoring and home detention fees for some defendants, including those who qualify to be represented by a public defender.

Smith’s bill will run through summer 2022 and took effect on July 1.

But, according to a letter sent from Freeman to Maryland District Court Chief Judge John P. Morrissey, the state had made no payments on behalf of eligible Marylanders as of Sept. 20.

“I don’t think any [lawmakers] were aware of the fact that people were being made to pay in the middle of the pandemic … and then, also, plot twist: the courts were closed, which means that people were on the box for much longer than I think anyone anticipated,” Freeman said Wednesday afternoon.

Bradley Tanner, a spokesperson for the Maryland Judiciary, said that the Department of Budget and Management notified the Judiciary in July that $5 million was being allocated to its budget for this pretrial services program, which is expected to begin in October — three months after the bill went into effect.

According to Freeman’s letter, BALT currently owes Advantage Sentencing Alternative Programs (ASAP) $36,000 “that should have been, by law, submitted and processed by the State over 2.5 months ago.”

Freeman’s been warned that BALT clients won’t be accepted by the home monitoring service if they don’t pay up immediately.

ASAP projects that BALT will owe $74,385 by Oct. 1. Some of that figure includes clients’ “past due” bills, Freeman said.

Freeman said that, during a conversation with Smith and House Judiciary Chair Luke H. Clippinger (D-Baltimore City) this week, both lawmakers made it clear that the state would not make retroactive payments despite the fact that the law took effect July 1.

Neither lawmaker could be reached for comment. Tanner confirmed that retroactive payments would not be made.

“Unfortunately, such a reimbursement was not provided for in the bill,” he wrote in an email.

Now, Fenwick said that ASAP has been “threatening” to tell the judge presiding over her case she’s late on payments, which could send her back to jail. Her trial date is scheduled at the end of October.

“I got three small children,” she said. “I’m a mother — I’m a single mother, at that — seeking help, trying to find programs.”

And the home monitoring company has already begun to reject clients represented by BALT.

According to Freeman’s letter, ASAP refused to take on a juvenile client earlier this month because he said he would be covered by BALT.

During a Wednesday phone interview, Freeman said her organization rushed over to the ASAP office to “give them cash” for this client, and has done so for at least two other people.

But some aren’t so lucky: according to Freeman, there’s at least one person in jail because they couldn’t afford to pay for home detention, and another has been unable to get his monitor removed because he owes money to ASAP.

She also said these non-payment notices are new.

For the year-and-a-half that BALT has worked with ASAP, they’ve never sent out non-payment notices and would even refer people to BALT if they began to fall behind on payments.

In some cases, BALT clients are facing financial hardship for cases that are never prosecuted.

According to an analysis done by Freeman’s team on Wednesday, of 181 people who received financial home monitoring assistance from BALT, at least 14 have had their charges dismissed, “which means that all of this money that we spent was for not,” she said.

Freeman said she never expected a “seamless transition” in implementing the new law. But she had hoped that state officials and lawmakers would take responsibility for its implementation — or lack thereof.

“If you know that it’s difficult and you know that there are people that are being harmed by it, … you should do your damnedest to make sure that they’re not, right?” she said.