The Maryland Board of Elections has given Steele 30 days to respond to a complaint filed by a conservative member of the House of Delegates.

The complaint, by Del. Lauren Arikan (R-Baltimore and Harford counties), targets the Michael Steele for Governor Exploratory Committee, which he created in July to fund polling and travel as he considers a gubernatorial bid next year.

Unlike traditional campaign accounts, Steele’s is a “527” — named for a provision in federal tax law that allows potential candidates a way to raise and spend small amounts of money.

Arikan did not respond to requests for comments in August or on Monday, but in a statement last month she contended that Steele is using the 527 committee to violate Maryland campaign finance law.

In its Sept. 9 letter to Steele, the elections board said the complaint “alleges that the exploratory committee is engaging in activities that would require registration” as a traditional campaign finance entity.

Steele has until Oct. 10 “to provide a written explanation and any supporting documentation, if any, as to why a violation of the Maryland Election Law Article has not occurred as alleged in the complaint, or any facts in mitigation of a potential violation.”

“She’s doing his dirty work,” he said. “It’s the kind of stuff we’d expect out of those people.”

Dornan said Steele’s committee is fully complying with the guidance they received from the secretary of State’s office and their own attorneys. “We can spend [our funds] on exactly what the secretary laid out and that’s exactly what we’re doing — polling, travel and campaign literature.”

“I don’t know where she gets this idea that we’re spending this money in all the wrong places,” he added. “She has no access to those records.”

In a statement released Tuesday afternoon, Arikan said she was “appalled by the completely dishonest allegations coming from the Michael Steele campaign about me and their false claim that I am working on behalf of anyone other than the people of Maryland in my complaint against Michael Steele’s exploratory committee.”

Arikan said she has not endorsed or worked with the Cox campaign and has “decided to stay completely out of the gubernatorial Republican primary.”

Arikan’s statement echoed Cox’s response. In an email Monday evening, he said Dornan was “wrong to say that Delegate Arikan is ‘doing my dirty work.’ That is completely false.”

“Delegate Arikan has nothing to do with my campaign,” he added. “I have pledged a clean race and I urge the others to do so as well.”

The letter from the state elections board notes that exploratory committees are “limited in their scope and purpose” to raising and spending fund for polls, mailings and other steps “to determine if the individual is a viable candidate.”

“There are no statutory provisions that expressly authorize exploratory committees,” wrote Jared DeMarinis, the director of the division of Candidacy and Campaign Finance. “However, the Office of the Attorney General has advised that some exploratory or ‘testing the waters’ activities are permissible, but only for non-candidates.”

In addition, he wrote, Steele’s entity may have “triggered” other disclosure requirements if it contributed more than $6,000 to other campaign committees.

When Arikan filed her complaint, just as Steele was preparing to attend the Maryland Association of Counties summer conference, Dornan told Maryland Matters that the campaign was well aware of the $6,000 transfer limit.

Dornan said Steele will reply to the Board of Elections by the Oct. 10 deadline, saying “these are false allegations coming from someone who has no idea what she’s talking about.”

Steele will likely decide whether to run in the next four to six weeks, he said.

Editor’s Note: This story has been updated to include a comment released by Del. Lauren Arikan on Tuesday afternoon. 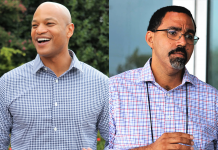