Walking into the Annapolis State House recently became a bit like time travel as several national founding documents from the 18th and 19th centuries were unveiled Thursday night as part of a Founding Freedoms exhibit.

Early and immediate newspaper printings of the Declaration of Independence, Constitution and Bill of Rights, as well as historic engravings of the declaration, are on display, free to the public, from 9 a.m. to 5 p.m. daily until Nov. 14.

The copy of the Constitution, appearing in the Pennsylvania Packet and Daily Advertiser two days after it was ratified in 1787, was a re-pressing of type set for copies sent to Congressional Convention committees.

There are also beautiful vellum and paper engravings sent as gifts to politicians; one 1823 copy of the Declaration of Independence is more commonly used in textbooks than the original.

The collection, era-accurately and ornately framed and enclosed in dark wood displays, is on loan from Maryland native and billionaire philanthropist David Rubenstein.

Rubenstein’s Americana Collection adviser Mazy Boroujerdi said the documents were collected over several years for the purpose of exhibition. Before they were on display, these historical artifacts were carefully conserved, he said to a Capital News Service reporter in an email.

“The tricky part of doing an exhibition in the Maryland State House is also the reason the setting has such promise. The building is less of a museum than an artifact itself,” Boroujerdi said. 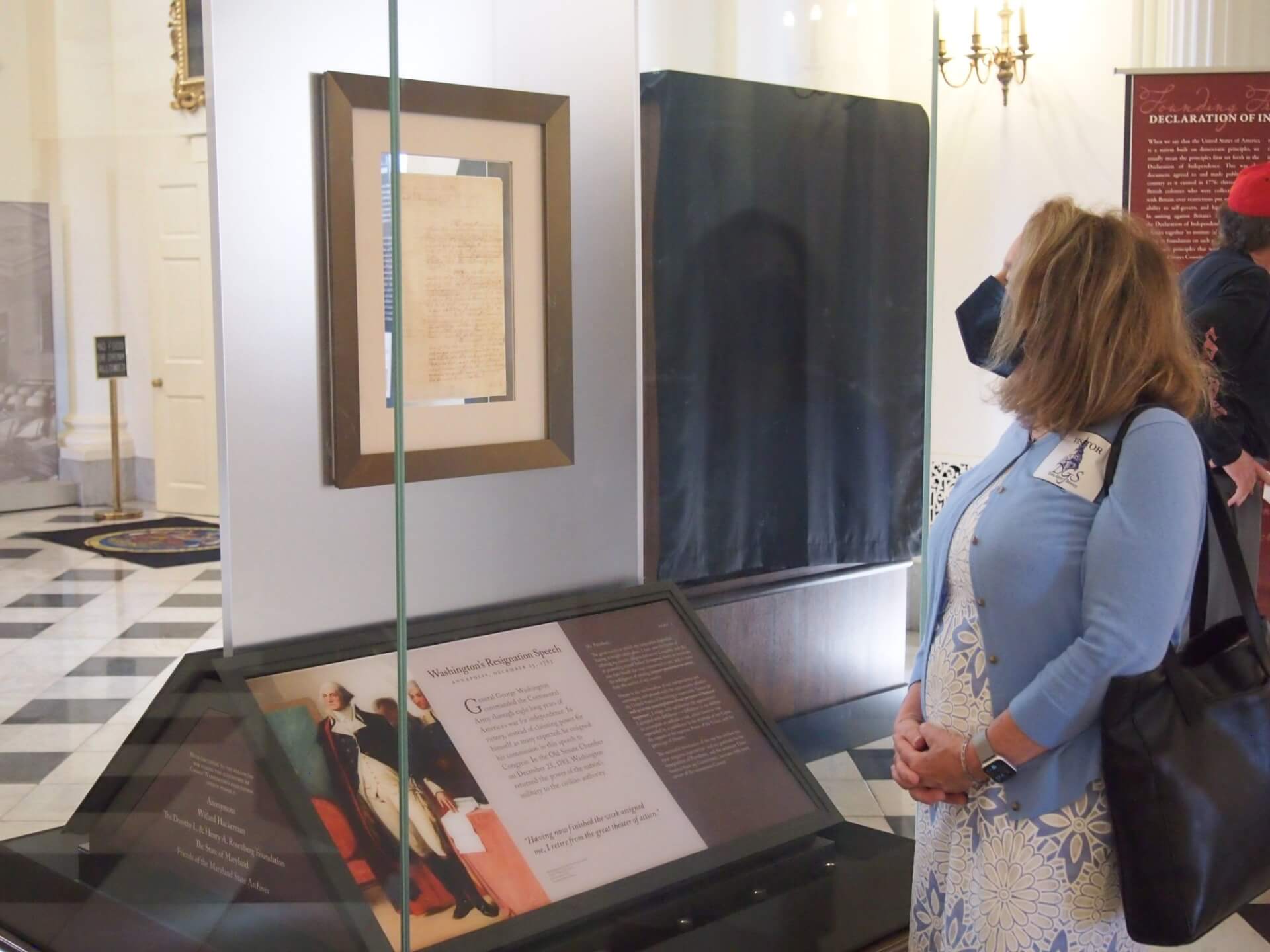 The display revolves around an original letter George Washington penned: his 1783 resignation as commander in chief of the Continental Army, complete with crossed-out words and darker writing where he re-inked his quill.

Washington read the letter to the Senate in the same State House that stands today.

“To walk through the old Senate chamber is to feel as the members of Congress did when Washington resigned as commander in chief of the Army,” Boroujerdi continued.

The letter connects the exhibit to the State House and is situated chronologically between the declaration and the Constitution.

The letter, owned by the Maryland State Archives, has been on display in the building since 2015.

When Deborah Dixon arrived at the State House this morning for training to lead Historic Annapolis tours through the exhibit, she expected the documents to be already visible. Instead, all but the letter were covered in thick, black sheets, which were pulled off and folded before orientation began.

“Annapolis was the national capital for 10 months. It’s so neat that these documents are coming back to us,” she said.

As sunlight streamed through the State House windows to fall on the cabinets and the protected documents, tour-guides-to-be talked in hushed, awed tones about bleached colors, pointing through where they would lead their groups through the building.

Janet Hall, who is organizing the Historic Annapolis guided tours, said even today’s First Maryland Regiment re-enactors, who dress in period clothing and educate the public, are to tour the exhibit tomorrow, turning the State House into a bubble from the past.

What Hall called an “iconic and unique” exhibit isn’t just for the knowledgeable. “This is something that every child, every adult should go see,” Hall encouraged.