Twenty years ago Saturday, hundreds of first responders throughout Maryland and the surrounding region rushed to the crash sites of the 9/11 terrorist attacks.

Nearly 3,000 people were killed that morning — 2,753 at the World Trade Center in New York, 184 at the Pentagon, and 40 who were aboard a hijacked plane that crashed in a Shanksville, Pennsylvania field.

Two members of the Federal Emergency Management Agency’s Maryland Task Force 1, an urban search and rescue team, Troy Lipp and Kelvin Thomas, were among the responders who reported to the Pentagon after the attacks.

The men, who are both still active in the Montgomery County Fire and Rescue Service, shared their stories with Patch:

‘The losses there sticks with me’

Troy Lipp had been on the job for 12 years and was an assistant chief for the FEMA urban search and rescue task force when he went to a continuing education class for paramedics.

He was sitting in the classroom in the middle of listening to a lecture when one of the academy staff leaders came in and said that a plane had hit one of the World Trade Center buildings. They paused the class to put on the TV, and some of the other paramedics asked Lipp if he thought they would be sent to New York, knowing he was one of the task force leaders.

Lipp thought it was possible, but also knew that New York City had a giant fire department, capable of handling serious disasters. He went across the hall to call his team leader, Mike McCarty, and make sure he had seen what was happening. He was home that day and hadn’t heard anything.

“So I said, ‘Well, you know, you probably want to turn on the TV and see what’s going on,'” Lipp remembers.

They decided they would wait for FEMA to contact them and give them instructions — the protocol for something like this. Lipp hung up the phone and walked back across the hall.

“As I walked into the classroom the second plane hit the second tower, and so I immediately turn back around and I called Mike,” said Lipp. “I said, ‘Mike, did you see that? If they’re attacking New York City, they could be attacking here or anywhere else, we better recall the team right now.'”

They called their team in — on a regular day, about two-thirds of the team is off-duty, Lipp said. They typically contacted everyone using alphanumeric pagers, but at the time there was so much phone traffic the networks couldn’t keep up, and it was hard to get calls to go through.

“The text paging process didn’t function,” said Lipp. “But what did function was our guys who were home or going about their daily lives who realized there was a big problem and that they were probably going to be needed to respond, and so they self-dispatched themselves back to work.”

They didn’t go to New York. They went to the Pentagon after a plane crashed there. 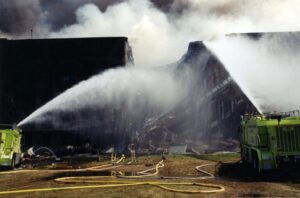 When Lipp’s unit is dispatched, they are totally self-supporting. They bring their own food and supplies to wherever they are sent. This case was a bit unusual, because it was only a single location that was affected; businesses, restaurants, and hotels nearby were still open and able to function. Eventually, they were put up in a hotel for part of their week-long stay at the Pentagon.

Mostly, they worked long shifts and then ate and slept while they were off. There wasn’t a ton of time to reflect on what was happening. There was a job to do.

When they were being sent home, the trip back was shorter than Lipp was used to. Sometimes they are sent far away — his team responded to the Oklahoma City bombing — and there’s time on the way home to think about what’s happened. But Montgomery County was only a little ways away. Friends and family were at the station to greet the team, in what Lipp described as an emotional homecoming.

He hopes that 9/11 isn’t something that becomes lost on the younger generations who didn’t live through it — he thinks of the ways it changed so many lives.

“The families that were impacted by the losses there sticks with me,” he said. “The fact that their path of life was altered permanently. I feel for them.”

Lipp is now a captain with Montgomery County Fire and Rescue Service and serves as an assistant task force leader with the FEMA US&R Team.

‘Why did this happen?’

Kelvin Thomas went into work at his fire station in Silver Spring on the morning of Sept. 11, 2001. He was a master firefighter and team member of Task Force One, part of the urban search and rescue team. That day he was planning on doing water rescue training, so he and a teammate got in their truck and headed up to Rockville. 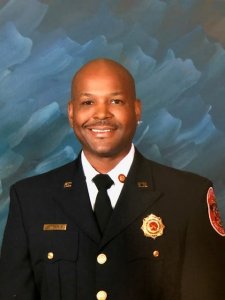 Thomas remembers a cop pulling up beside their truck and asking them if they had heard about the plane crashing into the World Trade Center in New York. He said he thought it was a small plane.

Thomas said he hadn’t heard, and they kept driving.

When they got to their station in Rockville, two people came running out. They told Thomas he had to see the TV. He followed them into the TV room, where people were watching footage of a plane hitting the north tower.

At first, it didn’t really register what was going on. Then the second plane hit the south tower.

“We witnessed the second plane crashing into the building,” said Thomas. “At that point, it changed our entire outlook.”

The plan for the day changed immediately. Thomas and his coworkers knew they would be deployed, but they thought it would be to New York, to help crews with search and rescue — then a plane crashed into the Pentagon.

He ran home to get some clothes and other supplies. He didn’t know how long he would be gone. He called his wife — who was working in Washington, D.C., at the time — and told her she had to get home.

His crew was sent to the Pentagon and when they got there, most of the survivors had also been rescued. They were retrieving bodies.

He had done plenty of searches and rescues before, but none like this.

“There were some office areas that we went into that were still on fire,” said Thomas. “Lots of heat in some of those areas, and I just recall trying to break out some of the windows in the Pentagon just to increase our visibility and to relieve some of the heat, and those windows would not break.”

While he worked, Thomas didn’t think much about what had happened. He didn’t have time to dwell upon why this had happened, or what would happen next. He was focused on the job in front of him.

As the week went on, Thomas and his crew stayed at the Pentagon. They worked 10- or 12-hour shifts recovering bodies. Eventually they were put up in a nearby hotel, and when they were off Thomas said he had more time to think about what was going on.

“Lots of personal confusion,” he said. “‘Wow, why did this happen?'”

Thomas is a battalion chief in Montgomery County Fire and Rescue.

To see this story by Colleen Martin as it originally appeared on Patch.com, click here.