The writer is the Harford County sheriff.

I was appalled to read in a Maryland Matters article that Worcester County Commissioner Diana Purnell thinks so little of our veterans and their sacrifices that she found it necessary for political expediency to publicly disparage them as human beings [“Gathering in Ocean City After Viral Video Lawmakers Call for More Police Accountability and Reform,” Aug. 20].

Ms. Purnell’s comments condemn all veterans who chose to serve their communities as police officers as being trained killers. These comments are a clear indication of her hatred and distrust for her fellow citizens. The seriousness of her feelings and misguided beliefs cannot be understated and should not go without challenge.

Attempting to use such a platform for partisan efforts to malign veterans and public servants undermines her position as an elected official who speaks for all. This attitude gravely threatens public confidence in the impartial administration of government and reflects unfavorably on herself and the citizens she serves. Indeed, this course of conduct is reprehensible and should not be tolerated on any level.

In her comments before attendees of the Maryland Association of Counties summer conference, Commissioner Purnell offered her thoughts and observations concerning police reform. In her comments, she decided the condemnation of all police officers based on the actions of a very, very few was not enough to support her misinformed argument and decided to include our military veterans in her distain. 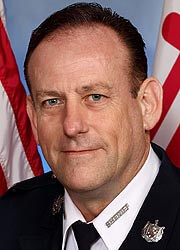 As reported in the article, it is her observation that a lot of police officers are military veterans and her quote toward those who have served our country was “… I’m gonna tell you, the thing that scares me the most about any police department are those policemen that come back from war zones and they are here to kill. If you think I’m a little off base, look what happened on January 6th.”

Commissioner Purnell is obviously not inclined to be dissuaded from hate by facts.

I am bewildered by her reference to Jan. 6 because I have not heard or read one report about veterans killing people at the U.S. Capitol. How can she equate this fact with a statement that the events of Jan. 6 support that our veterans are no more than killers?

Again, we are sadly living in a time where it is not only OK, but also politically savvy to some, to disparage the character of those who serve our country and communities. She, like many others, like to judge all by the actions of the few or even the one (unless of course we are looking at elected officials).

As the sheriff of Harford County, I am proud of the military veterans we have working for our agency, who serve and protect the public and save lives every day.

In fact, in the last two years, just in our county alone, four of our deputies, who are veterans, have received lifesaving awards for their heroic actions. Our agency encourages military veterans to apply for careers in law enforcement and corrections.

In fact, one of our efforts includes joining the U.S. Army’s PAYS Program, in which interested veterans are guaranteed an interview upon completion of their honorable service to our nation. These are not “killers” as Ms. Purnell alleges. They are well­ trained and disciplined men and women who have served our country with distinction and desire to continue in service to their local communities.

It is vitally important for public confidence in our elected officials to speak intelligently on topics so important and to not wildly paint people with their biased opinions.

Not only does Commissioner Purnell owe our veterans an apology for her comments, but I also certainly believe these nonfactual and hateful thoughts deserve some rebuke from the elected officials in Worcester County and those who invited her to speak at the MACo conference.

Political Notes: Moore Getting the Oprah Treatment, Schulz Sticks to the Script, and Gansler Lays Out Crime Plan

Oprah Winfrey, according to Wes Moore’s campaign, will interview the candidate ‘about leadership and the challenges families in Maryland are facing’ at an upcoming fundraiser.

According to a complaint, Harford County Sheriff Jeffrey Gahler refused to provide physical evidence and copies of video evidence to the Independent Investigation Unit.