It rained on-and-off Friday during the crab feast, an eagerly-anticipated ritual that helps cap off the annual Maryland Association of Counties’ summer conference.

And the steadily-increasing spread of the delta variant put a damper on some of the normal schmoozing and freewheeling socializing that occurs inside the Ocean City convention center — at least for some.

Nevertheless, attendees at Friday’s seafood and beer bonanza agreed that — after a 2020 summer conference that was held online — it was a ton of fun to be back under the tents.

“It’s great to be able to talk to people directly, not through a screen,” said Lt. Gov. Boyd K. Rutherford (R). “A lot of the folks that I’m seeing, I haven’t seen them in two years.”

“We’re all social beings,” he continued. “And being able to talk to someone face-to-face, being able to pat them on their shoulder, there’s a real benefit to that — and something that all of us have missed.”

“It almost feels normal,” said Caroline County Commissioner Wilbur Levengood Jr. (R), the president of MACo. “It’s been so long, we have to readjust again.”

MACo’s workshops offer local officials, state lawmakers and other stakeholders from around the state a dizzying array of opportunities to acquire new skills — everything from how to protect against cyberattacks and enact police reform to team-building and crisis communication.

There was even a session on “Waste Diversion and Innovative Organics Recycling.”

But for many attendees, the ability to see old friends and make new ones, network with powerful public officials — and trade political gossip — is a big part of the draw.

“Aside from the masks, MACo’s back,” said Montgomery County Councilmember Evan Glass (D). “It’s nice to see friends and colleagues from across the state and talk about the important work we’ve all been doing for the last 18 months — and to talk about politics, too.”

Asked if he was worried about picking up the virus, Glass replied, “I think this is a highly-vaccinated crowd.”

Even with some of the limitations imposed at the conference because of the virus, “It’s better than not having it all last year,” said state Sen. Stephen S. Hershey Jr. (R-Upper Shore).

“Being in-person is just a wonderful thing. It’s a sense of normalcy,” said Cecil County Councilmember George C. Patchell (R). “When you don’t have the in-person, you feel like you’re losing something.”

Friday’s menu was vintage MACo — platters of steamed Maryland blue crabs, burgers, hot dogs, corn on the cob, crab cakes and lesser sides, washed down by beer and mixed drinks. There was a birthday cake-sized container of Old Bay for those who wanted to max-out their crab experience.

A pleasing soundtrack was provided by The Klassix, a cover band.

“It’s actually great to be back around people, because for the last year-and-a-half, it’s been all virtual meetings,” said Debbie Burrell, a business development consultant based in Frederick. “It’s nice to see people face-to-face.”

Howard County Executive Calvin Ball (D), MACo’s second vice president and a conference attendee since 2006, said it was “a phenomenal feeling” to have an in-person gathering.

“And it makes me even more hopeful for the future,” he added. “A lot of what we do is built upon relationships and collaboration. Here, together, we’re able to build that Maryland that’s best for all.”

One veteran attendee observed that the crabs at the crab feast this year were bigger and better than ever, and wondered whether the absence of big crab feasts in the region over the past year has been a factor, because fewer of the crustaceans have been harvested. “It’s not crap crabs this year,” he said.

Masks were recommended in the convention center, and about two-thirds of the attendees wore them. But mask-wearing was considerably spottier at the myriad receptions and fundraisers that took place in Ocean City this week. Most people eschewed masks at events held on patios or at rooftop bars, but even some indoor events attracted shoulder-to-shoulder maskless crowds reminiscent of pre-pandemic Ocean City gatherings.

“I think unfortunately we’re probably overdoing things a little bit too much,” one senior lobbyist said Friday. “Let’s hope that’s not the story in two weeks.” 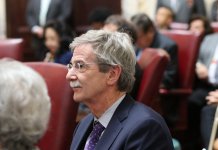 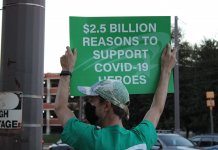 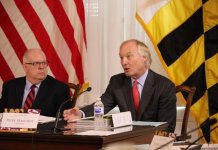