Sunset in Ocean City on Wednesday saw many bold-faced names of Maryland politics gathered on the rooftop deck of Skye Bar, 20-odd blocks north of the host venue for the Maryland Association of Counties summer convention, the Roland Powell Convention Center.

In a scene that’s sure to be repeated during the course of the week, at least three candidates for governor and their small entourages were on hand for the reception sponsored by Harris Jones Malone, a lobbying firm with offices in Baltimore and Annapolis: Democrats Wes Moore, Tom Perez and Mike Rosenbaum. (Later, at the last big party of the night, at Dry 85 and sponsored by the lobbying firm Capitol Strategies, Moore and Perez were again present.)

Many of the same cast of characters were largely present at other soirees in town — and are bound to show up at the dozens of other receptions still on tap while the conference is going on through Saturday.

Most of the crowd went maskless at the Skye Bar patio, though indoors, it was more like 50-50. Invitations asked that guests be vaccinated, and that masks be worn indoors when people weren’t eating or drinking.

Supporting Sample-Hughes on the Shore 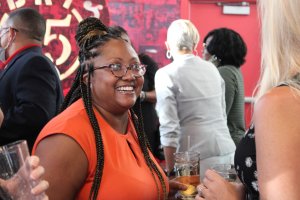 “Let me just say, the lady all the way from the Eastern Shore holds her own here as the only Democrat,” House Minority Whip Talmadge Branch (D-Baltimore City) said during a speech at the event.

Branch credited Sample-Hughes for her work in helping the House operate smoothly as possible during 2021’s unique session, and for her ability to work across the aisle.

Clad in orange — her campaign color — Sample-Hughes said she credits her constituents for shaping her policy priorities.

“I think that’s half the battle: just making sure people see you all year round — not just on election year — and really understanding that you need to bring home telehealth for the rural community, [that] we need to address police reform,” she said, noting some constituent priorities. “So, I’m listening all the time.”

Sample-Hughes is the lone Democrat representing the Eastern Shore. But asked how she feels about her re-election campaign considering the ever-deepening fault lines in Maryland’s political scene, Sample-Hughes said she feels “very good about it.”

“I’m feeling good about my reelection,” she said. “If they want me, I’ll continue to serve again, but if not then I’m okay. I just feel like I’ve done what I can do as a legislator for [District] 37A.”

Glassman on Comptroller Race: ‘Choice is Going to be Really Clear’ 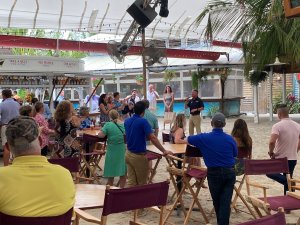 Harford County Executive Barry Glassman (R) addressed supporters of his bid for comptroller during a fundraiser at Seacrets in Ocean City on Wednesday. Photo by Bennett Leckrone.

In a speech to a crowd of supporters at a fundraiser in Ocean City Wednesday, Harford County Executive and lone Republican comptroller candidate Barry Glassman said he’s the most qualified candidate on either side of the aisle.

Glassman has been an elected official for some 30 years, during which time he’s served as a Harford County Council member, state delegate and senator, and most recently as the leader of one of Maryland’s eight largest jurisdictions. He touted that lengthy resume to his supporters at Seacrets, a popular entertainment complex on the Bay.

Glassman said he would be a “strong, independent Comptroller that’s going to look out for taxpayers, whether they’re Democrats, independents, or Republicans.”

Glassman’s potential Democratic opponents are Del. Brooke E. Lierman (D-Baltimore City), who has scored endorsements from dozens of her colleagues in the General Assembly, and Timothy J. Adams, the first Black mayor of Bowie and a wealthy defense contractor.