The first U.S. stop for the nearly 2,000 Afghan interpreters and other refugees evacuated so far amid the collapse of the Afghan government has been central Virginia’s Fort Lee military base.

Tapped for its East Coast location and its ability to quickly ramp up to serve as a temporary host installation, the Army base just south of Richmond has been receiving Afghans eligible for Special Immigrant Visas since late last month.

Two other bases will soon be joining Fort Lee in processing the incoming Afghan evacuees. Department of Defense officials said Monday that they will also use Wisconsin’s Fort McCoy and Fort Bliss in Texas — which could allow for evacuating as many as 22,000 individuals to the U.S.

At Fort Lee and soon at other sites, officials have been attempting to speed up the final steps of an excruciatingly slow visa process for providing a legal path to safety for individuals who worked with U.S. forces and personnel during the 20 years of U.S. troops in Afghanistan.

More than 18,000 Afghans who have worked as interpreters, drivers, security guards and fixers for the United States during the war have been stuck in limbo as they await answers on their visa applications, and have faced threats to their lives and those of their families.

The initial arrivals had already completed their security vetting, but still needed to undergo a medical screening and other administrative requirements.

Social services agencies have been ramping up to assist with the influx of refugees. Many of those arriving are expected to be resettled in the Washington, D.C., area, according to the Lutheran Social Services of the National Capital Area, which has resettlement sites in Fairfax, Va., Dale City, Va., and Hyattsville, Md.

Maryland, which is among the top states for receiving refugees through the Special Immigrant Visa process, expects to receive at least 180 Afghan nationals, according to Gov. Lawrence J. Hogan Jr. (R).

“Many of these Afghan citizens — our allies — bravely risked their lives to provide invaluable support for many years to our efforts as interpreters and support staff, and we have a moral obligation to help them,” Hogan said in a statement, in which he also blasted the U.S. withdrawn from that country as “rushed and irresponsible.”

Hogan said the Maryland Office of Refugees and Asylees will lead resettlement efforts and the state is “ready and willing to receive more.”

Amid a criticism of the Biden administration’s handling of the U.S. withdrawal, there has been a flood of bipartisan support for aiding the Afghan nationals who assisted the U.S.

He applauded Hogan’s announcement, and said he hopes that Afghan refugees who settle in Maryland will be “perceived as heroes and people that have helped their American counterparts fight against terrorism,” which he called “a very patriotic thing.”

“I hope we can accept even more,” he said. “I’m just one little person, but I will do whatever it takes, full stop, to assist in that.”

Smith called the situation unfolding “terribly disheartening and tragic to see,” and that the amount of progress that will be lost, particularly for Afghan women, is devastating.

“We’ve, I think, accomplished our counterterrorism mission but the opportunities for women and young girls who are now journalists, Olympians, members of Parliament, professors — I could go on and on — just the amount of progress that’s going to be rolled back because of the Taliban is hard to watch,” he said during a phone interview Monday evening.

With the Taliban in possession of the presidential palace and chaos in the streets, U.S. Sen. Chris Van Hollen (D-Md.) said the U.S. must “pull out all the stops to save people.”

“If we fail that, we’ve failed a very moral responsibility that we have,” he said, during an interview following an event in Silver Spring.

Van Hollen was born in neighboring Pakistan. His father was a career diplomat who served as Deputy Assistant Secretary of State for Near-East and South Asia at the time his son was born.

Asked about the operational failures that led to the sudden collapse of the country — which has already sparked a humanitarian crisis — Van Hollen said “I have some strong opinions of how this might have gone better.”

He did not elaborate.

Van Hollen said his office is receiving a steady stream of phone calls from people worried about loved ones who are missing or unable to flee.

“My focus right now is trying to get everybody out, and we’re in touch regularly with both the State Department as well as the folks at [the U.S. Department of] Homeland Security about cases of relatives of Maryland residents who are trying to get out.”

Sen. Benjamin L. Cardin (D-Md.), a senior member of the Senate Foreign Relations Committee, said in a statement that he would encourage the Biden administration to find “extraordinary ways” to bypass the normal bureaucracy and evacuate applicants for asylum immediately.

“The United States can now use any money that was previously going to be spent supporting Afghan security forces to help save Afghan lives,” Cardin said. “Given the U.S. role in the war in Afghanistan, the United States has a moral responsibility to accept any Afghan seeking refuge that it can. The U.S. government should facilitate evacuation flights for all vulnerable groups in Afghanistan who seek asylum and safe haven in the United States or beyond.”

Cardin said the U.S. should also expand refugee applications to include “women, the LGBTQI+ community, and ethnic and religious minorities.”

Rep. Anthony G. Brown (D-Md.), a member of the House Armed Services Committee and 30-year Army veteran, said in a statement that the U.S. should “use all available resources and immediately conduct a major military airlift campaign to protect and evacuate our citizens in harm’s way and secure our Afghan partners who worked alongside us for decades.”

He said the withdrawal of U.S. troops “does not mean the United States can turn a blind eye to Afghanistan.”

“Combatting terror networks and ensuring adherence to international laws remain core to our broader mission in the region. We have a responsibility to get this right,” Brown said.

Over the weekend, Brown signed on to a letter led by Rep. Jason Crow, (D-Colo.), a former Army Ranger who served in Iraq and Afghanistan, and Rep. Tom Malinowski, (D-N.J.), urging the immediate evacuation of U.S. citizens and those eligible for special visas, as well as others at extreme risk.

“The safety of U.S. diplomats and military personnel must be our first priority. But we must also evacuate Afghans eligible for Special Immigrant Visas,” they wrote. “All public and private resources must now be mobilized to save not just those eligible for SIVs but as many other vulnerable Afghans as possible.”

Sen. Joni Ernst, (R-Iowa), a combat veteran who was among lawmakers who visited Fort Lee earlier this month, said during a CNN interview Monday that she has been “extremely concerned” about the slow pace of visa approvals for Afghans.

“It is time that they expedite this,” Ernst said. “They need to get as many of our friends and allies out of Afghanistan as quickly as possible.”

Virginia officials from both parties also have shown support for the evacuation efforts.

U.S. Rep. Donald McEachin, a Democrat whose district includes Fort Lee, said in a statement Monday that his office has been “coordinating with the Biden administration, the State Department, and the Department of Defense to ensure these processes continue smoothly and our facilities remain ready for any additional needs.”

Virginia House Republican Leader Todd Gilbert called on Gov. Ralph Northam to “put the full weight of state government” behind an effort to support the interpreters and other refugees at Fort Lee. 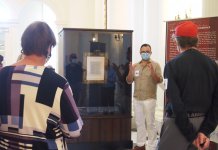 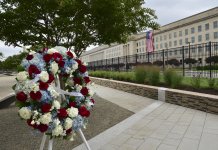 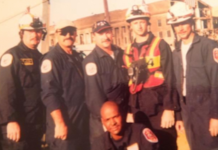