I think it may have been the winter of 2016 that I truly fell in love with jazz music, its unpredictable measures, its wild staccato, the way it blew into my ears like feathers overstuffing goose down pillows in a bed and breakfast in the French quarter in New Orleans … a place to which I’ve never been but I’m sure feels like jazz sounds. In that nippy winter of ’16 (and maybe the Spring before it) was the first time I had ever sat to appreciate the unpredictability of the way the notes that were plucked, blown and rehearsed out onto an audience could fly me and listeners nearby nearly anywhere in the world … in any decade which is great because I hate to fly chuckles and I don’t have a time machine but maybe that bozo Jeff Bezos does, anyway. 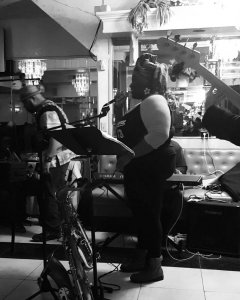 Alanah Davis performs at a bar near her home in 2016. Davis credits jazz music for helping get her through difficult times. Courtesy photo.

The years of 2015 and 2016 were tough for me. I was going through a divorce, forced out of my cookie-cutter two-bedroom home with ample green space in Baltimore County with my family to a small bedroom on Preston Street in East Baltimore surrounded by only concrete, drugs and one church down the street. Myself, my two children and my mother all slept on one mattress.

Jazz was the only thing sometimes that made any of it feel like it made sense. Some days I’d be the first to rise off of our queen-sized mattress on the floor and onto a city bus to find my way to nearby arts districts and neighboring streets with small cafes where I could parlay with friends and fellow artists for a while until the sunset drew near and events would start where I could do spoken word for tips, feature at open mics or visit jazz venues.

Lucky for me, during this very peculiar time there was a bar which moonlighted as a jazz venue every Monday nearby my boarding house in east Baltimore on Belnord Avenue. I’ll never forget this one night I was wearing a headwrap, brown knock-off Doc Marten boots, black stretch pants with a singular button, one pleat down the front and an orange and black Orioles baseball tee with ¾ length sleeves. I found myself seated with a gaggle of my artsy friends in a corner booth at a hole-in-the-wall bar on Belnord Avenue when the band struck up. They played right to my anguish but also to what made me feel good at 24 — being unpredictable and what kept me alive … God.

The music felt like church but the only spirits in that bar were liquid and in round crystal bar glasses clouded by a thin film of fried foods.

I never ate the food there at that sticky bar but I always left feeling full from the music. Always had just enough to keep me in the routine of peeling myself off of that mattress in the morning in those wild years. Something about those chord progressions kept me. The musicians from the room have since moved on to better venues, thank God or thank the Blues … both?

I’m not a doctor, but if I were I’d begin to prescribe “Jazz for the Wild” at least once a week. Jazz cut through a thicket of emotions that I fear otherwise would have swallowed me whole, the way some people on Twitter wish space would have swallowed Bezos. Or maybe the true arch enemy is capitalism? Capitalism keeps a lot of single Black mothers in a chokehold that a jazz prescription may never be enough for. Housing insecurity isn’t a new instrument and I wasn’t the first to play it, it’s a standard under the poverty line. I’m just glad I had jazz to accompany me in the wild.