Family members and advocates gathered at Patriot Plaza outside of the Baltimore County Circuit Court on Monday evening to rally for justice on the five-year anniversary of the death of Korryn Gaines, a Black woman who was killed by a Baltimore County Police Officer in 2016.

“Today, I get some healing because I’m able to see people that I know and love … here is supporting me,” said Gaines’ mother, Rhanda Dormeus. “I can finally start my healing process. But my fight doesn’t stop here because I know mothers all across the nation, that all haven’t dealt with the judicial system, but they still being drug [down].”

Taylor was killed during a no-knock warrant by police in Louisville, Ky., in March 2020.

“I’m sorry you’re still fighting this fight,” Palmer said to Dormeus. “I’m here. I can be whatever I can be for you. That’s all I know how to do.”

Breonna Taylor’s mother, Tamika Palmer, spoke in solidarity with Korryn Gaines’ mother, Rhanda Dormeus, at memorial rally held five years after Gaines’ was killed by a Balt. Co. Police officer. “I'm here, I can be whatever I can be for you. That's all I know how to do,” she said pic.twitter.com/u8nB5Rx40f

On Aug. 1, 2016, Gaines, a mother of two young children, was shot in the back and killed by Baltimore County Police Officer Royce Ruby. Her son Kodi, then 5 years old, was also wounded during the shooting.

According to the ACLU of Maryland, officers arrived at Gaines’ apartment to execute a traffic warrant, obtaining a key from her landlord when no one answered the door. She was found inside with a gun, which began a multi-hour standoff. Ruby shot her after he said Gaines aimed her gun in his direction.

Local prosecutors declined to press criminal charges against Ruby and the shooting of Gaines was ruled justified. Her family sued Baltimore County and all officers involved in a civil lawsuit.

Under Maryland’s current law, state employees — including law enforcement — are immune from civil liability for transgressions that violate the rights of others if the offending action is within the scope of their job description and was objectively reasonable, or done without malice or gross negligence.

Multiple attempts were made to do away with qualified immunity during the major police reform overhaul seen during the 2021 legislative session, but none were successful.

In July 2020, the Maryland Court of Special Appeals ruled that Norman improperly set aside the jury’s verdict and remanded the case back to Circuit Court for further proceedings, including to finalize the monetary damages the family should be awarded.

J. Wyndal Gordon, an attorney for Gaines’ family, said Monday evening that the family has settled the case with the county, though he didn’t offer specifics. Former state Sen. Larry Young (D-Baltimore City) was able to help settle “entire case … except for Kodi Gaines,” Gordon said.

“That’s why we’re out here,” Wyndal said. “We were led by Senator Larry Young. He did it once before. He’ll do it again.” 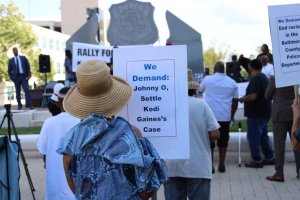 Supporters gathered Monday evening at a rally calling for justice after the fifth anniversary of the death of Korryn Gaines, a Black woman killed by a Baltimore County Police officer in 2016. Photo by Hannah Gaskill.

During his speech, Young thanked Rev. Al Sharpton and state Sen. Charles E. Sydnor III (D-Baltimore County) for their assistance in the first portion of the settlement.

Rally attendees called for the county to complete the payout, with several speakers saying that they hold the power to vote Baltimore County Executive John A. Olszewski Jr. (D) out of office during the 2022 election cycle.

“Today we demand that Johnny O pay the jury verdict and write the check to Kodi Gaines,” Palmer said to applause. “Five years is too long. We demand justice now.”

Baltimore City State’s Attorney Marilyn Mosby (D) told the crowd that Gaines would be alive to advocate for herself today if not for a traffic violation.

Mosby has publicly refused to prosecute minor offenses in the city.

While the crowd largely praised Mosby, Tawanda Jones, whose brother, Tyrone West, was slain by police in Baltimore City, spoke at the rally, mentioning a series of Black men and women who have been publicly mistreated by the American criminal justice system, including Keith Davis Jr.

Mosby has continuously faced heat for her extended pursuit of charges against Davis. A movement has been started for his release, with supporters saying he was wrongly convicted.

Mosby had left the rally by the time Jones spoke.

Sen. Jill P. Carter (D-Baltimore City) said that she very easily could have been Gaines.

“She looked just like me when I was younger,” Carter said. “She looks just like me, and, like me, she had brains and courage. And I recall it could have been me because I spoke back to police officers.”

.@jillpcarter said that she was like Korryn Gaines when she was young — beautiful, brilliant, bold. But she’s also like Gaines because she lives in a racist and sexist system that harms Black women. pic.twitter.com/YXbxFOTwfk

Carter said Gaines’ death highlighted systemic racism and sexism that Black women, including the senator, face “at every level.”

“…For many years I was in the legislature and I was talking about Black Power [and] ending … abuse of Black people and nobody was trying to hear it,” she said.

Carter told the crowd that, even though she was elected to represent the people in her district, leadership in the House of Delegates said she didn’t have “a right to legislate.”

“The same racism and sexism that wound up killing Korryn Gaines affects us at every level: ‘You don’t have a right to legislate Black woman; people elected you, but you have no rights down here.’ That’s what they said and I need you to understand this because it’s at every level, every level,” Carter said.