The top lawmakers on the House Health and Government Operations Committee continue to press the Hogan administration for data on who is getting COVID-19 in the state — and who is dying from the virus.

A spokesman for Gov. Lawrence J. Hogan Jr (R) said recently that every COVID-19 death in Maryland during the month of June was attributable to the state’s unvaccinated population.

On June 6, Hogan spokesman Michael Ricci tweeted that 100% of COVID-19 deaths, 95% of new cases and 93% of hospitalizations “occurred in people who were unvaccinated.” 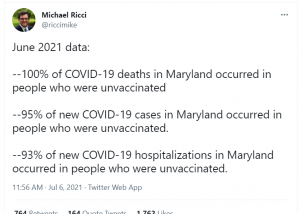 In a letter to Maryland Department of Health Secretary Dennis R. Schrader dated June 3, Pendergrass and Peña-Melnyk referenced a Washington Post article from late May which reported that, “after adjusting case data,” the infection rate among the country’s unvaccinated population was much higher than what had been publicized, and the death rate was barely budging.

The articles also reported that Maryland’s unvaccinated young adult population was seeing infection rates that mirrored those of the surge seen nationally in January 2021.

They also requested that the state employ a public awareness campaign regarding COVID-19 transmission among the unvaccinated population by June 30.

In a followup letter that Pendergrass and Peña-Melnyk sent to Schrader on Thursday, they noted that while Webster Ye, assistant secretary for health policy at the Maryland Department of Health, had promised to review their request from June 4, the state hadn’t “devised a way to implement” it.

“That was nearly seven weeks ago, and now the Delta variant is dominant,” they wrote.

Pendergrass and Peña-Melnyk again requested that the state launch a public health campaign aimed at educating residents of the risks of remaining unvaccinated and that the COVID-19 death data published on the state’s dashboard be broken down by vaccinated and unvaccinated populations.

“We need to reach people who, in part because of lies and misinformation, have resisted the vaccine so far,” they wrote. “Those two numbers need to be the ones Marylanders see.”

Schrader responded Friday that the Department of Health is “taking numerous proactive steps to inform the nearly 1.2 million Marylanders who remain unvaccinated about how safe and effective the COVID-19 vaccines are and the jeopardy they are putting themselves, their families, and friends in,” including:

But Pendergrass and Peña-Melnyk questioned the source of the data in Ricci’s tweet, which he told Maryland Matters in an email came from the Department of Health.

“Although we can’t find the source for these numbers on a website: 130 Marylanders died of Covid in June. 0 were vaccinated,” they wrote.

Schrader confirmed Ricci’s tweeted data, adding that, as of Wednesday, 2,493 people had been diagnosed with post-vaccination infections, or confirmed cases that arise up to 14 days after receiving the second dose of the Pfizer or Moderna vaccines or the single-dose Johnson & Johnson vaccine.

“We are working to further refine and analyze our data, and hope to post additional information on the coronavirus.maryland.gov website as soon as it is available,” he wrote.

Who Will Get a Booster Shot? A Q-and-A on What the Feds Are Saying