Lawyers will make their closing arguments Thursday in the trial to determine if the man who pleaded guilty to the 2018 murders of Capital Gazette employees Gerald Fischman, Robert Hiaasen, John McNamara, Rebecca Smith and Wendi Winters should be sent to prison or committed to a psychiatric hospital.

The gunman, Jarrod Ramos, has entered Maryland’s version of an insanity plea, arguing that he should not be held criminally responsible for his crimes.

Ramos pleaded guilty to all 23 counts against him in 2019. If jurors find him “not criminally responsible” (NCR), or unable to understand the criminality of his behavior or conform to the standards of the law because of a mental disorder, he will be sentenced to a maximum-security psychiatric hospital.

If he is found criminally responsible, a sentence would be served in prison.

Much of the trial has hinged upon mental health experts, who have offered potential diagnoses to explain the reasoning behind Ramos’ behavior on June 28, 2018.

While determining if Ramos suffers from a mental disorder is integral to the case, it doesn’t answer the legal question at hand: Did Ramos appreciate the criminality of his actions or was he unable to conform his behavior to the law?

“It’s complicated,” defense expert witness Dr. Dorothy Otnow Lewis, a clinical psychiatrist who specializes in violence, testified. “This is not just a simple, single-word diagnosis. He has a combination of mental problems … that seem[s] to cause this kind of violence.”

Dr. Erik Roskes, a board certified general and forensic psychiatrist, said it’s more important to understand what a defendant was experiencing at the time of their alleged crime.

“Criminal responsibility is specifically looking at what his mental state was at the moment of the offense,” he said during a phone interview last week. “What his mental state is now doesn’t matter. It only matters at the time the accused person … allegedly committed the crime.”

Under Maryland’s criminal code, mental disorders are defined as illnesses that “so substantially​​ impairs the mental or emotional functioning of an individual” that treatment is “necessary or advisable” for the safety and well-being of themselves or others.

“It’s very general. It doesn’t talk about diagnoses,” said Roskes, who has no involvement in the case. “It doesn’t say, ‘You’ve got to have schizophrenia or you can’t be NCR’ — nothing like that.”

“What you need to have is a mental disorder as defined in the statute.”

And the jury has had their fill of expert opinions on Ramos’ mental health.

“Mental disorders don’t determine this case,” he said, picking up a copy of the Diagnostic and Statistical Manual of Mental Disorders (DSM-5) and holding it in the air. “Any diagnosis in this book — it doesn’t matter.” 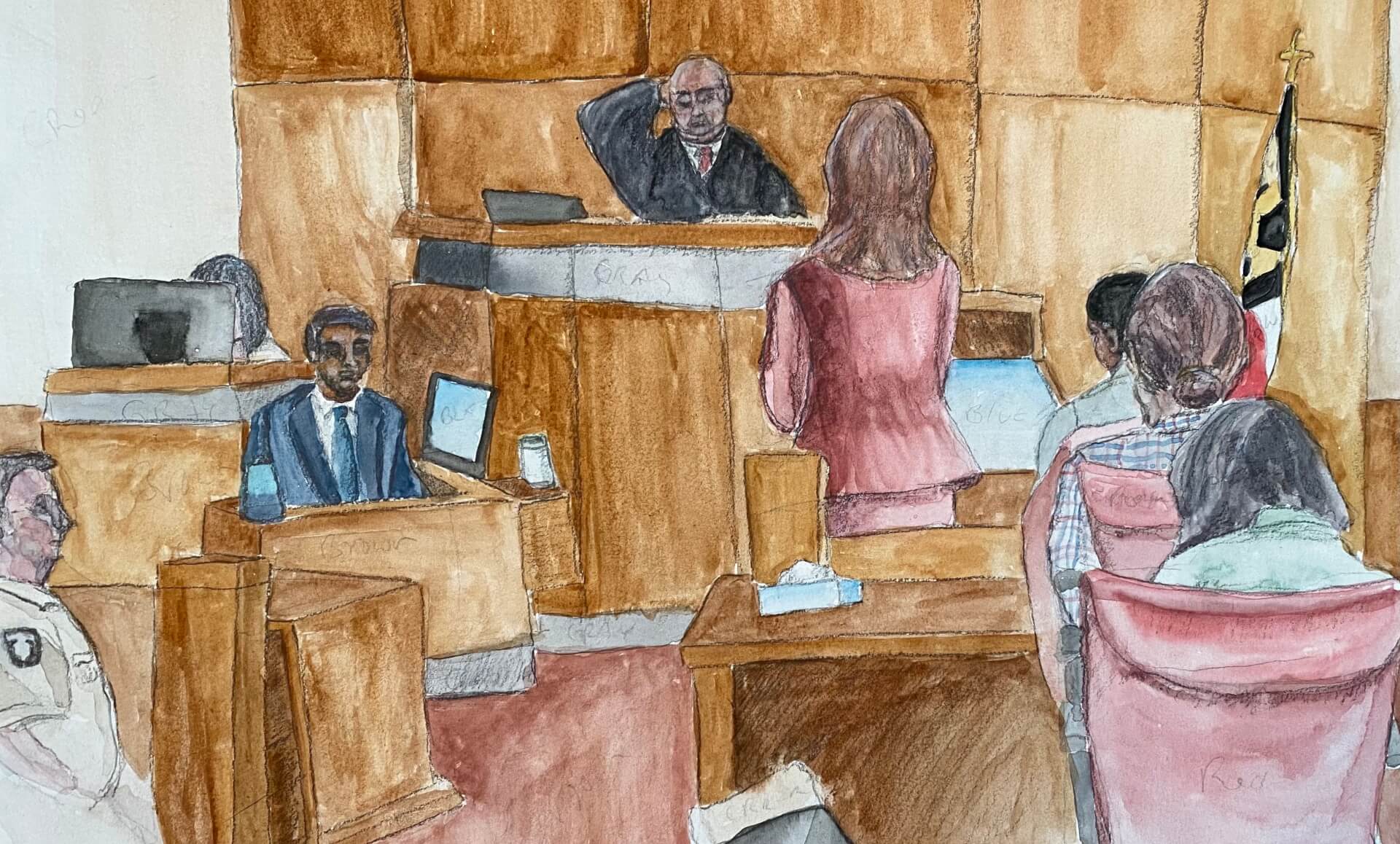 The DSM-5, published by American Psychiatric Association, has evolved over the last few decades and its origin wasn’t necessarily to diagnose but to lessen miscommunications between psychiatrists.

“It was created in response to an issue we were having in psychiatry where there was a disagreement on terms — we wanted to have a common language,” Dr. Paul Nestadt, a clinical psychiatrist and the co-director of the anxiety disorders outpatient clinic at Johns Hopkins, said during a phone interview. “So it kind of came out of the realization that … psychiatrists in different countries were calling the same sorts of presentations different things.”

And while it creates a uniform lexicon for clinicians across the globe, it’s not a silver bullet.

“The DSM is published by the American Psychiatric Association, and some people call it the Bible,” said Roskes. “I’m hard-pressed to call it the Bible when you revise it so many times. But it’s … what we look to as the guide for understanding psychiatric diagnosis.”

Nestadt, who is also not involved in the trial, said the DSM is “less like an encyclopedia” and “more like a field guide.”

“It’s not tremendously clinically useful. It’s used more to define a population,” he said. “Whereas when we’re trying to understand something with a patient, it’s much more of an organic evaluation where you get a sense of the patient — not as a bunch of codes in the DSM.”

And, asked if he thinks he’s insane, she said he “does not think he has a psychiatric disorder.”

Lewis also said that Ramos couldn’t appreciate the sadness that he had inflicted on the family members of his victims.

Anne Arundel County State’s Attorney Anne Colt Leitess (D) said that not appreciating the sadness experienced by family members has nothing to do with Maryland’s criminal responsibility standard.

“The whole plan was to be arrested and placed in a small room for the rest of his life,” Lewis said. “He knew it was wrong” — he just didn’t appreciate the criminality.

“He felt that what he did was OK in the interest of the universe,” she said.

She’s also said that Ramos suffers from the persecutory type of delusional disorder, meaning that he believes the world has been conspiring against him.

For example, Lewis said that Ramos became preoccupied with one particular sentence in a 2011 Capital Gazette column, “Jarrod wants to be your friend,” which detailed his guilty plea in a harassment lawsuit and sparked his ire against the newspaper:

“His messages rambled … saying ‘Expletive you, leave me alone’ though she hadn’t written him in months.”

Defense experts told the jury that Ramos saw the word “rambled” as libelous and that it made him seem “crazy.”

Lewis said Ramos believed the sentence damaged his reputation to such a degree that he could no longer leave his home.

“It was as if the world had become aware of him,” she said.

And despite the columnist leaving the newspaper years before the attack, she said Ramos engaged in the “very elaborate fantasy” that attacking the paper “would redeem him in some kind of way.”

Lewis said obsessive compulsive tendencies also played a role in Ramos’ actions leading up to the shooting, and that autism spectrum disorder rendered Ramos “blind to his own feelings and … the attitude of others.”

In the years leading up to the shooting, Ramos was isolated from the world and had limited ability to connect with others.

“To me, I picture a very fine thread or a hair that connected him to living, breathing things,” Lewis said on the stand. The most important living thing to him, she said, was his cat.

That cat died about a month-and-a-half before he blasted through the doors of the newsroom with the intention of killing everyone present. Lewis said he was broken upon her death.

“Did he kill the people at the Capital Gazette because his cat died?” Anne Arundel County State’s Attorney Anne Colt Leitess asked Lewis.

Lewis responded that she believes the cat was attached to the only semblance of sanity and empathy Ramos possessed, adding that if he had gotten another cat or if someone had asked him what happened when he took it to be euthanized, the shooting could have been stopped or delayed.

“But he was left alone,” said Lewis.

‘Attacking as retribution for a past event’

Patel has done approximately 60 evaluations for criminal responsibility during his time at Clifton T. Perkins Hospital Center. In about a quarter of those cases, he concluded defendants were not criminally responsible for their actions at the time of their crime.

He said those diagnoses could influence a person’s perceptions and how they interact with their environment, “but if you’re asking about criminal responsibility, that’s different.”

Patel said some of Ramos’ actions before, during and after the shooting showed that he understood the criminality:

Patel said Ramos also had the ability to conform his behavior to the standards of the law.

For instance, in the months before the attack, he attempted to maintain a “low profile,” so he never took his gun to the shooting range and practiced assembling and disassembling it in his apartment. He also methodically planned to look like an employee on the morning of the attack, shaving his beard, cutting his hair and wearing a shirt and tie upon entering the building. And he said he never planned to escape once the attack was over and intended to look like a victim by discarding his weapon, hiding under a desk and undoing his ponytail.

Based on his evaluation, there was “no element of coercion” from mental illness that caused the attack, Patel said. “He was basically attacking as retribution for a past event” and that doesn’t fit into an NCR finding, he said.

He also said that Ramos reported that he had access to the DSM-5 in custody, and knew that, in order to be found not criminally responsible, he would need to be diagnosed with a mental disorder.

“As a forensic psychiatrist, when they tell us that they plan to be arrested and plan to spend the rest of their life in prison we take that as an appreciation of the criminality of their conduct,” he said.

Asked his opinion on Ramos’ criminal responsibility, Patel had a straight-forward response for the jury.

“I do believe he was criminally responsible at the time of the offense,” he said.

Following a spike in hate crimes and other incidents targeting minorities and their places of worship, a new alert system led by civil rights leaders in Maryland has gone live.