Employees of the University of Maryland College Park whose jobs make it possible for them to telework are seeking to preserve that option, as the university plans to require all staff to return to their offices by August 2.

Some workers contend that they have been able to work effectively from home over the past year-and-a-half and do not see the need to return in-person, especially while the coronavirus remains a threat.

“Telework makes sense, telework is the environmentally sound thing to do … telework is going to be great for worker enjoyment and enthusiasm because they are going to be able to work in an environment they’re more comfortable in,” said Patrick Moran, president of American Federation of State County and Municipal Employees (AFSCME) Maryland Council 3. “Telework will not only save the campus money and the administration money, but [will save] employees money.”

Workers have to pay a minimum of $500 a year to park on campus, and some make less than $15 per hour, Moran continued.

Dozens of members from AFSCME Local 1072 gathered in front of the main administration building on a hot Tuesday afternoon to demand a meeting with university President Darryll J. Pines. They want to negotiate a new policy that allows them to telework at least three days per week, rotates in-person work schedules in small offices and delays requiring all staff to return to campus until late August or early September — when most schools plan to reopen for in-person learning. 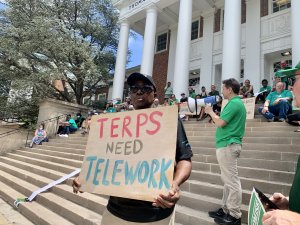 Several AFSCME union members told their stories on how telework has made their lives easier and demanded a campus-wide standardized access to telework for all workers. Photo by Elizabeth Shwe.

Returning to pre-pandemic policies means that supervisors will choose who can telework, which union members contend creates an unbalanced policy across campus.

Instead, they are demanding campus-wide standardized access to telework for all who can.

Yolanda Kerr, a technology coordinator, said that working from home has significantly improved her productivity and the more flexible schedule has increased her work morale and improved her work-life balance. She also said she lost her part-time job due to the coronavirus, but savings on gas and parking have helped.

“I know for a fact that some people who have the same roles and responsibilities as me are not allowed to telework as much as I am,” she said.

Solomon Comissiong, the assistant director of student involvement and public relations for the Nyumburu Cultural Center — a center for Black social, cultural and intellectual interaction at the university — said that he is in a “very untenable position” with two children in elementary school under his care during the day.

With no in-person orientation responsibilities, August is the most dormant time of the year for Comissiong, who has worked at the university for 21 years. He said he asked the Office of the President to extend his telework policy for one month, at least until his children can return to school. Not only did it take one month for them to get back to him, but they also denied his request, he said.

“I don’t have family in this area,” he said. “And I’m not going to scurry around to try to find a babysitter.”

Comissiong asked administrators if he could bring his children to his office while he works if he could not telework in August, but he is still awaiting a response.

David Jenson, a 23-year employee, is the only information technician in the career center. Starting in August, telework will be available to him only once a week, but he said he prefers to telework at least three days a week, as “99% of my job can be done by telework, and I have made sure that remote assistance has become easier since the start of telework.” 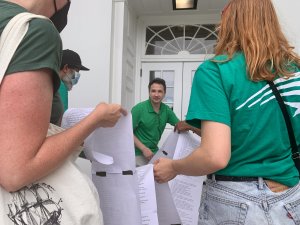 Todd Holden, president of AFSCME Local 1072 and other members hold a 14-page petition taped together to give to UMD President Darryll J. Pines in person. But the doors were locked. Photo by Elizabeth Shwe.

Union members spread a 14-page petition signed by more than 600 union members — including academic advisers, information technicians and department coordinators — down the steps of the main administration building. Before climbing the stairs to deliver their petition to Pines in person, the crowd of around 40 people chanted: “office workers are ready to fight, UMD — do what’s right!”

But the doors were locked. “They must be working from home,” someone shouted.

Around a dozen students joined the rally in solidarity with university employees.

“When a worker gets sick, a student also gets sick, and so student and worker safety is intimately connected and cannot be treated separately,” said Michael Marinelli, a senior from Baltimore City and leader of the United Students Against Sweatshops Local 54. “Protecting workers is protecting students and refusing to meet with workers who are demanding better protection is disrespectful to the students as well.”

Amber Stewart, a rising sophomore, said that she feels like her academic adviser appointments have been more productive remotely because they are easier to schedule and more efficient than meeting in person. “The advisers are more relaxed, and we have benefited from that,” she said.

A university spokeswoman told Maryland Matters that the university’s most recent collective bargaining agreement with AFSCME Local 1072 contains provisions that allow for telework.

“Campus unit leaders continue to consider employees’ requests for telework, and many divisions have already expanded telework options for staff. To further support employees, the University has expanded family care resources to meet the various caregiving needs of our employees,” spokeswoman Hafsa Siddiqi, wrote in an email.

AFSCME recently agreed to begin collective bargaining negotiations and an introductory session was held on July 9, Siddiqi continued. “The University looks forward to productive talks with AFSCME and reaching an agreement on matters of interest to both parties, including telework.”

But union members contend that bargaining a full union contract takes months, and it is unlikely that they will reach an agreement on telework before the August deadline.

This year, the Maryland General Assembly passed a bill that would require the chancellor of the University System of Maryland to act on behalf of all the system’s institutions in all aspects of collective bargaining, consolidating the process at the top. Although Gov. Lawrence J. Hogan Jr. (R) vetoed the bill in May, union members are expecting a veto override during the next legislative session.

Currently, across the system’s 12 institutions, there are 16 different contracts, according to AFSCME Council 3. When any institution reaches an agreement with a bargaining unit, it must then get approved by the system-wide chancellor. If rejected, the bargaining process starts over again.

The bill would have required the president of each USM institution to enter into a new agreement that includes telework. AFSCME said Pines has not responded yet to the union’s concerns surrounding access to telework.

“The bill was necessary because UMD and other campuses are unwilling to engage directly on important worker issues,” said Katie Mostris, communications director for AFSCME Maryland Council 3.

“If we were negotiating one contract with one decision maker, workers across campuses could work together with management to come up with a safe and smart policy on telework for all. Instead, we are having redundant and slow negotiations and workers’ voices and concerns aren’t being heard.”