“I thought I was going to die,” Capital Gazette reporter Rachel Pacella told the jury.

The gunman, Jarrod Ramos, alleges that he was not sane at the time of the attack. It is now up to a jury to determine if he is sentenced to a maximum-security psychiatric hospital or prison.

On June 28, 2018, at 2:33 p.m., Ramos blasted through the glass doors of the Capital Gazette office to, according to prosecutors, fulfill his long thought-out revenge plot rooted in dissatisfaction with a column published seven years earlier about his guilty plea in a harassment lawsuit.

Insurance sales representative Keith Cyphers was on the phone when he heard a noise “so loud you could hear it in your chest.”

Cyphers could see the newspaper’s lobby from his desk in an opposing suite. He leaned over and saw the shattered door.

“It was in a thousand pieces on the rug and I saw a man walking through the lobby of the Capital Gazette office holding a shotgun,” he told the jury Friday. 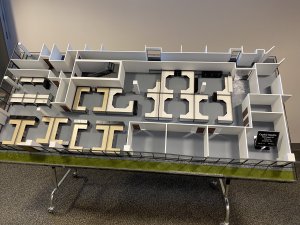 During Friday’s proceedings, prosecutors in the trial to determine whether the man who pleaded guilty to the murder of five Capital Gazette staff members had survivors show the jury where they hid during the attack on this full-scale model. Photo by Hannah Gaskill.

Cyphers said Ramos was positioned in a way that allowed him to aim his weapon while moving around the reception area where Rebecca Smith sat.

Cooley’s desk faced the entrance of the suite where Ramos confronted Smith, but she couldn’t see what happened. She said the blast from his gun was so loud and startling that it was “kind of [like] when a transformer blows.”

She stood up to see what was happening, “and then I looked towards my right and that’s where I saw a man with a gun,” said Cooley. She immediately hid under her desk.

Cooley began to sob on the witness stand.

“I hear Rebecca in a very small, quiet voice saying, ‘No no no,’ and then I heard the shotgun go off and that’s when I realized what was happening,” she said.

According to Dr. Theodore M. King, a forensic pathologist at the Office of the Chief Medical Examiner, Smith suffered what appeared to be at least three shotgun wounds.

Cyphers recalled seeing Smith crawling over the glass from the door.

He hung up his call and immediately dialed 911. Anne Arundel County State’s Attorney Anne Colt Leitess played the call for the jury Friday.

“I’m at 888 Bestgate Road. There’s a man shooting,” he told the dispatcher. He described Ramos: a white man in his 20s or 30s wearing a black shirt, green paints and glasses with long hair.

From under her desk, Cooley was facing the editorial section of the office. She saw Wendi Winters moving up the hallway towards Ramos with her trash and recycling cans in her hands.

“She is charging up the walkway … and I hear her say something like, ‘You get out of here, you stop that’ — just kind of scolding him —  and then I hear the shotgun go off,” Cooley said.

Dr. John A. Stash, assistant medical examiner at the Office of the Chief Medical Examiner, said that Winters had been shot in the chest.

Cooley said that the office got really quiet after Winters was shot — “like you could hear a pin drop.”

Photojournalist Paul Gillespie said he sat about 10 feet from Winters, and as she moved towards Ramos heard her say “no.”

Gillespie hid under the photo desk as the gunman lurked through the suite.

“I sat there curled up in a ball trying not to breathe or make a noise,” he said. His thoughts: “I can’t believe this is happening, I’m gonna die.”

Gillespie heard a “lull” in the gunshots and started to run towards the door, passing both Winters and Smith.

Ramos saw him on the move and began firing in his direction.

Gillespie “felt breeze” across his head from the bullets, he said.

Gillespie ran out of the office building in search of help.

At one point, Cooley saw the green laser light Ramos had attached to the end of his gun focus on a filing cabinet near where she was hiding.

“I remember thinking, ‘Oh my God, they’re going to be on me in two seconds and this is going to hurt’ — just the anticipation of what was coming” but he didn’t come in her area. That’s when she made her break for it.

Cooley said that she and Ramos made eye contact. She fell while running to her escape, cutting her hand on the broken glass.

Before firing through the glass doors at the front of the Capital Gazette suite, Ramos barricaded the newsroom’s backdoor, leaving those in the back of the office with no other recourse but to hide.

“At first, I thought the door had been locked somehow,” former Capital Gazette reporter Selene San Felice told the jury.

San Felice had been talking to her coworkers Rachel Pacella, Phil Davis and reporting intern Anthony Messenger as Ramos entered the suite. When she understood there was a shooter, San Felice said that she grabbed her bag and ran to the barricaded back door.

“I realized that I needed to find a place to hide so I pulled Anthony under a desk with me,” San Felice told jurors. “At that point, I saw Rachel Pacella run to the backdoor, as well, and she tripped and it looked like she hurt herself” before she scrambled behind a filing cabinet.

From behind the filing cabinet, Pacella, concussed, said she saw the beam from a flashlight attached to Ramos’ gun on the ground.

“I think I was hoping it was [the] police,” but was worried the light would shine on me, she told jurors.

John McNamara also tried to flee through the newsroom’s backdoor but was unsuccessful. San Felice said he couldn’t find an adequate place to hide.

“When he went down he had been laying right in front of where I was,” San Felice said.

King said that McNamara was shot twice — once in the upper back and lateral right chest. 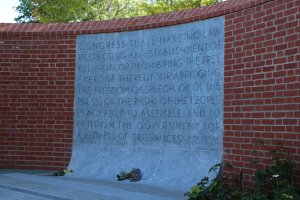 The legacy of Capital Gazette employees Gerald Fischman, Robert Hiaasen, John McNamara, Rebecca Smith and Wendi Winters is honored by the Guardians of the First Amendment monument that was unveiled in Annapolis on the third anniversary of the attack on their newsroom. Photo by Hannah Gaskill.

“Initially, I was just kind of in shock,” Messenger said. “Once John got shot I thought we were gonna die.”

Davis, also under a desk, said that he could hear Ramos reloading his gun “within feet” of where he was hiding. Davis said he then heard a single shot that “reverberated” across the office.

Then everything went silent.

San Felice took Messenger’s phone, tweeted a request for help and called her dad, whispering, “It’s me, I’m going to text you.”

San Felice texted her parents that there was a shooter in the newsroom and that she loved them.

“I wanted to make sure that I didn’t tell them that I was going to be ok,” she said. “I was waiting to die and so I was praying, and at a certain point I remembered  that I needed to start praying for John — not just myself.”

After San Felice texted her parents, Messenger said he called 911, but the line was busy. He got patched through to a dispatcher as the last round was fired off.

Messenger said that police entered the office two minutes after he heard the last round fire.

During those two minutes, Ramos ditched his gun, wristwatch, protective eyewear and earplugs, took his hair down from a ponytail and hid under a desk.

Law enforcement entered the suite and collected Pacella, San Felice and Messenger, who held onto each others’ shoulders, staring at the napes of their necks as they were escorted past their wounded coworkers and out of the building.

Davis was escorted back into the office twice: once to give officers his key card, and again to retrieve his personal cell phone.

He said that when he exited the office after his second re-entry, officers found Ramos surrendering under a desk. During her opening statement delivered Thursday, Leitess said that Ramos was discovered at 2:51 p.m. — 19 minutes after the shooting began.

The jury is set to hear from expert psychiatric witnesses when the trial continues next week.

Ramos pleaded guilty to all 23 counts against him on Oct. 28, 2019, just two days before jury selection for the criminal phase of his trial was set to begin.

In this sentencing phase of the trial, jurors will decide whether Ramos was sane at the time of the shooting. If they find him “not criminally responsible,” or unable to understand the criminality of his behavior because of a mental disorder, he will be sentenced to a maximum-security psychiatric hospital. If he is found criminally responsible, a sentence would be served in prison.

Proposed changes to medical parole include inmate being released at any time; geriatric parole eligibility every two years for those 60 and older.