Applications to serve on a board to help ensure success of the Blueprint for Maryland’s Future education reforms will be accepted starting Monday, according to members of a nominating committee for the panel.

Committee members said they aim to recommend candidates to Gov. Lawrence J. Hogan Jr. (R) for seats on the Blueprint for Maryland’s Future Accountability and Implementation Board by mid-September.

“We have an important task ahead of us, and it’s a tremendous opportunity for us to be proud of fully funding schools for students, families and staff,” Shanaysha Sauls, the nominating committee’s chair, said during the committee’s first public meeting Thursday afternoon.

The committee selected Sauls to be the chair and Sen. Paul Pinsky (D-Prince George’s) to be vice chair.

The Accountability and Implementation Board (AIB) was established through the Blueprint for Maryland’s Future, a multi-billion-dollar education reform plan intended to close student achievement gaps and transform the state’s education system over the next decade.

The sweeping education plan became law this year, after the General Assembly approved it and overrode Hogan’s veto.

The primary responsibility of the seven-member board is to hold all state and local entities accountable in implementing the goals of the Blueprint — which include expanding pre-kindergarten programs, increasing funding for schools with higher concentrations of poverty, boosting pay and career opportunities for teachers and providing more individualized instruction.

For the next decade, the AIB will evaluate the results of the Blueprint against its intended outcomes.

The AIB is an independent unit of state government, which means that it has authority, under the Blueprint and HB 1372, over various state agencies including the Maryland State Department of Education and the State Board of Education, if they come into conflict.

The nominating committee is tasked with choosing nine candidates from whom Hogan must appoint seven members to the Accountability and Implementation Board. Hogan will have 30 days to select seven candidates, whose appointments are subject to Senate confirmation.

For a board candidate to be nominated, the candidate must be approved by a majority vote of the committee, including at least one member selected by Hogan, one by Ferguson and one by Jones.

Pinsky said he proposed this requirement to the Kirwan Commission — which made recommendations for the Blueprint legislation — to avoid partisanship on the committee and “to get the most competent people who are committed to and would enforce the Blueprint for Maryland’s Future.”

Members of the AIB and the nominating committee receive no compensation but are reimbursed for travel and other expenses.

A five-page application to serve on the AIB will be open from July 12 through August 4, according to the committee. The nominating committee will not publicize applicants’ names, except the names that they forward to the governor, Pinsky said. And candidates must submit applications themselves, not on the behalf of another.

Because the committee largely deals with personnel matters, most of their meetings will be closed to the public to protect applicants’ privacy, according to the committee’s attorney.

That means that the public most likely will not be privy to information until the committee’s last meeting, or when the committee releases its nine nominees to send to the governor, said Stacy M. Goodman, counsel to the committee.

The public can submit comments to [email protected]. “Staff will ensure that all public comments are afforded to every single member of the committee,” Sauls said.

The committee also discussed whether undocumented residents could serve as AIB members. Sauls suggested it might be better not to tackle the issue.

She said, “sometimes silence is better than making a decision.”

But Rose Li — a nominating committee member and a former member of the State Board of Education — made a motion to require that all AIB members be a “legal resident of Maryland.”

Cheryl Bost, president of the Maryland State Education Association, pointed out that undocumented residents also pay taxes to the state.

Other members had reservations about allowing undocumented residents to serve on the AIB.

“I am having difficulty imagining somebody who isn’t in this country legally having the qualifications and the courage to apply for the position on this board,” committee member Edward Root said.

The motion failed 2-4, with Root and Li voting in favor of the motion.

Although some education advocates were hoping that the AIB would be in place by this summer, “I think a bit of grace is warranted,” said Shamoyia Gardiner, executive director of Strong Schools Maryland, a grassroots organization advocating for the Blueprint. “We are in the midst of a  historical global pandemic and attempting things that we’ve never done before.”

But it is important that the AIB be formed “as soon as possible,” Gardiner continued. “Frankly, they have a major task ahead of them, and they’ll want as much time as possible to consider whatever data, information and public input they can in order to do this well.” 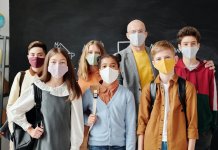