Prosecution in the trial to determine the sanity of the gunman who murdered Capital Gazette staffers Gerald Fischman, Robert Hiaasen, John McNamara, Rebecca Smith and Wendi Winters moved to have a defense witness excused Wednesday afternoon, alleging that she was reading her answers from a script.

“She’s been testifying here for about an hour — an hour and a half — and she’s been reading from a script,” Assistant State’s Attorney David Russell said to Judge Michael Wachs.

She also testified that she was not there to provide an expert opinion on Ramos, whom she said she had never seen until her court appearance Tuesday.

Rather, Brandt, who had worked for eight years as the director of pretrial evaluations at Clifton T. Perkins Hospital Center — the state’s maximum-security forensic psychiatric facility — appeared as a witness with expertise in diagnostics, detailing the processes of how psychiatrists pinpoint mental disorders in patients.

After a series of sustained objections to questions asked by Public Defender Matthew Connell and multiple bench conferences, Wachs instructed the bailiff to remove the jury from the courtroom and asked Brandt to step outside.

At this point, Russell publicly alleged Brandt was reading from a script with questions and answers, and asked that her testimony be stricken and that she be excused as a witness.

Connell said that he never provided Brandt with a script, but had given her his direct questions.

“I didn’t know she was looking at anything when I asked her the questions,” he said.

Wachs said he noticed that Connell and Brandt were flipping pages at the same time. He also said that Connell would not allow him to see his copy. 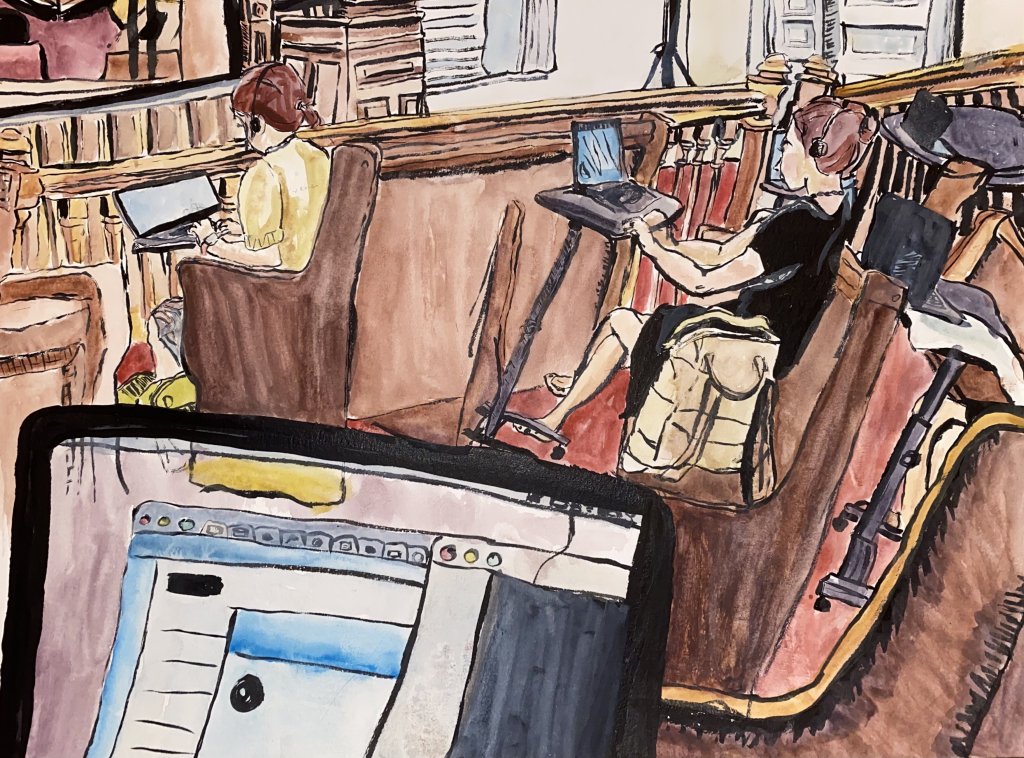 A reporters’ eye view: Most journalists covering the sentencing phase of the Capital Gazette murder trial have been watching proceedings via closed-circuit TV. Drawing by Hannah Gaskill.

Connell argued that it isn’t inappropriate for an attorney to prepare a witness to testify, noting that extensive witness preparation has been happening for this case for the past three years.

“It’s not a script,” he said. “It’s a direct examination that an attorney and a witness have worked on together for months.”

“It literally, word for word,” is what you asked her, he said.

Ultimately, Wachs allowed Connell to continue his questioning of Brandt on Wednesday.

She is expected to return to the stand when the trial continues Thursday morning.

“Can I cross-examine on the fact she’s been using a script?” asked Russell.

Russell also inquired if the state could consult with its own expert witnesses, who have been present in the courtroom, about cross-examination questions they plan to ask Brandt in the morning. Wachs said yes, ruling that it would not violate the court’s sequestration rule.

Brandt is not allowed to communicate with defense counsel overnight.

Before dismissing for the day, Wachs said that striking Brandt’s testimony remains an open question.

Callow’s body camera footage showed a compliant Ramos, responding to officers’ orders, except for when he was asked to identify himself.

The defense called Anne Arundel County Police Detective Kelly Harding, who attempted to interview Ramos after he was taken into custody.

Footage from an interview room in the homicide section of the Criminal Investigation Division building in Crownsville showed an equally cooperative Ramos responding to commands and questions except for those related to his criminal activity or identity.

When asked to identify himself, Ramos responded multiple times with a question: “You don’t know my name?”

At one point, he told Harding to ask Rick Hutzell, who retired as the editor of the Capital Gazette earlier this month.

Asked if Hutzell was one of the people he shot or killed Ramos said no.

“As far as I know, Rick Hutzell is still alive,” he said.

He laughed after Harding and Brown told him that the media was reporting that he had altered his fingerprints, rendering him unidentifiable. This report was untrue.

“Are you guys the anonymous source?” he joked.

The trial, which is scheduled to run for two weeks, is set to reconvene Thursday at 9 a.m.