Marylanders who refuse to get vaccinated against COVID-19 account for nearly all of the state’s recent coronavirus infections, hospitalizations and deaths, Health Secretary Dennis R. Schrader told lawmakers on Monday.

The numbers — which Schrader called “very sobering” — serve as a reminder that going unvaccinated is dangerous and that the pandemic is not over.

But Schrader told the state Senate’s Vaccination Workgroup that since May 10, unvaccinated people account for 97% of the COVID-19 caseload, 89% of the hospitalizations and 89% of the deaths.

“There are approximately 1.4 million Marylanders [age] 12 and older who are still unvaccinated and remain in serious risk of contracting and being hospitalized by COVID-19,” he told the panel.

Maryland has administered more than 6.8 million vaccinations, representing 72% of the 12-and-older population and 91% of seniors. The state is one of just three states — Vermont and South Dakota are the others — to see cases drop to below one for every 100,000 residents, Schrader said.

Health department staff are poring through survey data to determine why vaccine hesitancy remains a problem, he added.

Around the U.S., health experts continue to track a red-blue divide in vaccination rates, with states that former President Trump carried lagging behind those won by President Biden.

A Maryland Matters analysis of the state’s health data revealed a similar pattern.

By contrast, the nine least-vaccinated counties were all carried by Donald Trump.

Analysts in the Department of Legislative Services found that eight counties have both historically low vaccination rates and low “recent” vaccination rates, a potential sign of entrenched resistance.

The patterns mirror a Maryland Matters analysis conducted in April.

Sen. Clarence Lam (D-Howard), a physician and a member of the vaccination oversight panel, said in an interview that it’s “no surprise” that rural communities, where notions of “rugged individualism” are not uncommon, continue to lag behind.

“Some of these locations that are more distant are less inclined to grasp the need for the common, community good and lean more towards individual freedom, liberty, choices, and more of a Libertarian streak,” he said.

“When you have pockets of the country and pockets of the state where there are high levels of unvaccinated individuals, [it] means that there is greater risk of the spread of COVID,” Lam said. “And these people move around.”

The lawmaker said that clusters of non-vaccinated individuals are a particular risk to people who are immuno-compromised and may not be able to get vaccinated.

Sen. Addie Eckhardt (R-Middle Shore), a member of the vaccine workgroup and a nurse before entering politics, lamented that she has had trouble convincing some of her relatives in Western Maryland and on the west coast to get vaccinated.

“I’ve talked until I’m blue in the face,” she said. “It’s gotten to be a family, tense issue, because there is some mind set out there in many people that this is not safe [and] there’s not enough information.”

Schrader appeared reluctant to get drawn into a lengthy discussion about vaccine hesitancy, but he stressed that the state is committed to figure out how to “break into that.”

“We’re not giving up on any county,” he said. “We really believe that we’ve got a lot more work to do — and we’re not going to slow down or stop until we get as many people vaccinated as possible.” 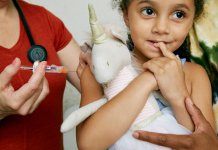