A crowd of hundreds gathered in Annapolis on Monday — declared as Freedom of the Press Day in Maryland — for the dedication of a memorial to five slain Capital Gazette employees.

Phil Davis, who was in the newsroom on the day of the shooting, said “guardians” was a fitting name for the memorial.

“It will give their names weight, and the weight they deserve,” said Davis, now a reporter for The Baltimore Sun.

But he also had a greater hope: that future visitors will think of their multifaceted lives — and not just their work, though important — when they come upon the memorial.

“These were people with families, interests and desires that were all unique and very much in line with furthering the communities they served. I want a future where there’s also a future for the people of the press, where humanity takes precedence,” Davis said. “One where we see these five as people who fought for a greater cause, but also as individuals who are part of the greater whole that we call society.”

And while the ceremony was focused on the lives lost, speakers also made passionate pleas to support the future of The Capital Gazette and the newspaper industry as a whole. 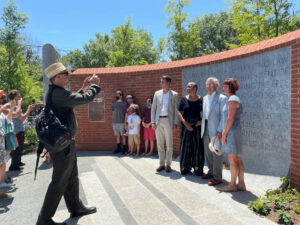 Hundreds gathered in Annapolis on Monday to dedicate the Guardians of the First Amendment memorial in memory of Gerald Fischman, Rob Hiaasen, John McNamara, Rebecca Smith and Wendi Winters, who were killed in a shooting at the Capital Gazette offices on June 28, 2018. Photo by Danielle E. Gaines.

“If you care about journalism and truth and freedom of the press anywhere, subscribe to your local news organization,” said Rick Hutzell, the paper’s former editor. “…Because that’s the only way they will survive.”

Hutzell worked at the paper for more than three decades before deciding, earlier this month, to take a buyout from the paper’s new owners, Alden Global Capital.

Annapolis Mayor Gavin Buckley invoked the defiant words of former Capital reporter Chase Cook, who, on the day of the shooting, tweeted that he and his surviving colleagues were “putting out a damn paper tomorrow.”

“They did. They haven’t missed one since,” Buckley said. “It is my fervent hope that they will continue to put out a damn paper. And that the new owners will support this effort.”

Cook is also among the Baltimore Sun Media Group employees to take a buyout after the purchase by Alden, which is known for acquiring newsrooms and then slashing budgets.

David Simon, creator of “The Wire,” harkened back to Thomas Jefferson, who famously said he would prefer a nation with newspapers and no government to that of a country with a government and no newspapers.

“Well, Jefferson’s worst-case scenario is now staring us down. Capitalism and the solitary metric of maximized profit is devouring American newspapering, pulling cash from the nation’s papers to the very moment that they’ll be asked to close their doors,” Simon said. “…Here in Maryland, the Capital Gazette of this city and the Sun of Baltimore are brutalized by out-of-town ownership that answers to the hunger of shareholders, not to any public or community obligation.”

House Speaker Adrienne A. Jones (D-Baltimore County) said the memorial is “a reminder that governments should be transparent, the public should know the truth, and journalists shouldn’t be afraid to tell it.”

Jones said the shooting shook the tight-knit Annapolis community to its core, and she spoke of the grief the late speaker Michael E. Busch felt after the attack. She said lawmakers have passed state-level gun safety measures since the shooting and will continue to advocate for more, as well as an “unwavering” commitment to freedom of the press.

The memorial was dedicated the day before a sentencing trial in the case is set to begin. 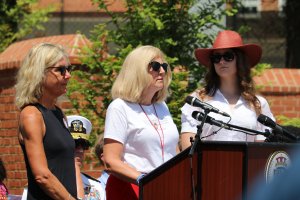 Maria Hiaasen, widow of Rob Hiaasen, Andrea Chamblee, widow of John McNamara, and Summerleigh Winters, daughter of Wendi Winters, address the crowd at the dedication ceremony for the Guardians of the First Amendment memorial. Photo by Danielle E. Gaines.

“To honor the lives of those who have been cruelly taken away from us, we are dedicated to preventing this from never happening again to any newspaper, to any family, to anyone,” she said. “…We demand our leaders use their positions to make real, meaningful change that will save lives.”

Summerleigh Winters shared her mother Wendi’s love for reporting, down to her journalism-themed clothing choices.

“She loved every part of her job. She didn’t do it for the money. But she did it for the community. And she did it for us: for me and my siblings,” Summerleigh said. “And now we are here with you. And I greatly appreciate the support from our community in these trying times for our family.”

Maria Hiaasen, widow of Rob Hiaasen, said he would have loved the location for the memorial – overlooking the water, near the little pocket parks where he liked to sit and think and the dock where they’d take off on boat rides to commemorate their anniversary.

“Rob Hiaasen loved this community. I so wish he could be here. He cannot,” Maria told the crowd. “Let me tell you: your actions, your support, make me feel compelled to say I love you too.”