State Sen. Douglas J.J. Peters (D), a veteran Prince George’s County lawmaker who finished just out of the running in the intense, behind-the-scenes battle to become Senate president two years ago, does not plan to seek re-election in 2022.

“I made the decision a while back and informed some close colleagues recently that I’m not going to run again,” Peters told Maryland Matters this week.

The 57-year-old senator, who previously served on the Prince George’s County Council and the Bowie City Council, said he expects to be able to say more about his future plans soon — but they will not involve running for office again.

Peters’ disclosure comes as at least one candidate is preparing to run for his seat: Businesswoman Sylvia L. Johnson is announcing at a fundraiser Saturday that she plans to be a candidate in the 23rd District. Johnson was gearing up to run against Peters, and may now face a different political environment in the district, which as currently drawn is centered in Bowie and stretches from South Laurel in the north and east to south of Upper Marlboro.

Peters said the prospect of a tough Democratic primary challenge had no bearing on his 2022 political plans.

“Even if I was Senate president, I wasn’t going to run again,” he said. “It would be my fifth term. Time to let someone else take over.”

But even though he is a conscientious officeholder who is personally popular with his colleagues, as a pro-life, white Catholic Democrat who voted against marriage equality legislation when it hit the Senate floor, Peters has increasingly become out of step with a district that is rapidly changing demographically and with a Democratic caucus in Annapolis that is growing more progressive.

Peters faced an aggressive Democratic primary challenge from wealthy government contractor Timothy L. Adams in 2018, prevailing with 59% of the vote. Adams, who has since become the first Black mayor of Bowie, is now running for state comptroller.

Though some Democrats suggest that Adams could change plans and seek Peters’ Senate seat next year instead of making a statewide run, a spokesman dismissed that idea.

“Tim has no interest in running for anything but comptroller,” spokesman Shaun Daniels said Friday.

One Senate hopeful who isn’t waiting is Johnson, a longtime Prince George’s resident who runs two information technology firms — one in biomedical consulting, the other involving cybersecurity.

She plans to launch her Senate bid Saturday morning at 10 a.m. outside a coffee shop in Bowie. Del. Darryl Barnes (D-Prince George’s), the head of the Legislative Black Caucus, will introduce Johnson, but is staying neutral in the race.

Mark McLaurin, the former political director of SEIU Local 500, is her chief strategist until she hires a campaign manager.

In an interview, Johnson said she chose the location because “small businesses are not getting their due share of contracts” with state government. 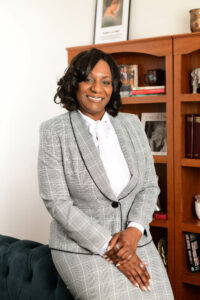 A self-described progressive and “analytical thinker” who grew up in Washington, D.C., Johnson said she learned a lot from her mother, who was a shop steward for a union representing hospitality workers in the 1970s.

As an 11-year-old, she said she successfully lobbied a neighbor, then-D.C. Mayor Walter Washington, to build a playground in her neighborhood.

“I’m not new to the political arena,” she said. “I’ve never been an elected politician, but I’ve been in and around politics all my life.”

Prior to starting her own companies, Johnson worked for the NIH, FDA and “several Fortune 500 Pharmaceutical and Biotechnology companies,” according to her biography.

She was appointed to the Prince George’s County Human Relations Commission in 2019 by Executive Angela D. Alsobrooks (D). If elected, Johnson said she would focus on health disparities, equity in education and police reform.

Peters’ retirement will open a significant position in the Senate: He’s chairman of the powerful Capital Budget Subcommittee. The current vice chairman, Sen. Craig J. Zucker (D-Montgomery), is chair of the Senate Democratic Caucus. A game of leadership musical chairs could follow.

Peters, who has served on the Budget and Taxation Committee for his entire Senate career, has held other consequential positions in the legislature, including Senate majority leader. In 2019, he was one of a handful of senators jockeying to replace the long-serving Senate president, Thomas V. Mike Miller Jr., when Miller signaled that he was ready to give up the gavel after 33 years. That fall, days before the Democratic Caucus was scheduled to meet, the battle appeared to come down to Peters and Sen. Bill Ferguson (D-Baltimore City), who ultimately prevailed after Peters bowed out.

Senate Republican leaders suggested that they were willing to throw their votes Peters’ way, which could have put him over the top. But Peters decided to honor the will of the Democratic Caucus.

Through mid-January, Peters had a robust $238,315 in his campaign account. He can use that for contributions to other candidates or political committees, or donate the funds to charity.

Recently, Peters paid for a poll that tested the Democratic candidates for governor. The survey, which showed a wide-open race, created a buzz because it was the first publicly-released poll of the 2022 cycle.

Editor’s Note: This story was updated to correct that Del. Darryl Barnes is remaining neutral in the District 23 race.

Governor-elect has said he will pay for Maryland’s expanded pre-K program through taxes on revenue from cannabis, sports betting and other sources.