Saira Cortez has had a rough six months: She was diagnosed with a hemorrhage and anemia that required her to see specialists and receive blood transfusions. She’s also been told she needs a hysterectomy to quell the bleeding.

But she doesn’t have health insurance, making her access to adequate care difficult.

Cortez, who speaks Spanish, pushed through tears at a news conference held at CASA’s Multicultural Center on Wednesday as George Escobar, the organization’s chief of programs and services, translated her story.

Cortez said that doctors are refusing to perform surgery on her because she’s uninsured, leaving her confused and helpless. 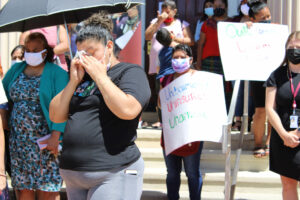 “It’s been very confusing because on … the one side, I have received all these blood transfusions — I’ve received all this emergency care — but on the other side, when I’m released, I’ve been told to wait. I’m being told that this isn’t an emergency,” she said. “But how can it not be an emergency? I literally can’t leave my house. I have to even wear adult diapers to be able to move around.”

The Care For All Coalition is a partnership dedicated to campaigning for expanded health care services in Prince George’s County through the creation of a centralized primary care system available to those without health insurance.

Taveras said that the Prince George’s County Council has already allotted $5 million over three years to a program to ensure that those with the ability to access federally qualified health centers won’t be turned away.

“But now the conversation [is], how do we expand it and mold it so that all families can be included for all issues?” she asked at the Wednesday news conference.

In Prince George’s County, 13% of residents are living without health insurance — the highest rate of uninsured people out of Maryland’s 24 jurisdictions.

And the disparity between those with and without coverage was only exacerbated by the COVID-19 pandemic, which has hit Black and Brown communities at a disproportionate rate.

Digna Ramirez, an uninsured single mother with a sizeable amount of medical debt, has suffered through the inequities laid bare by the pandemic.

Escobar also translated her story at the Wednesday news conference.

Ramirez has accumulated tens of thousands of dollars in medical debt over the past decade after hospital stays for pneumonia, a car accident and, more recently, COVID-19.

“So I was isolated,” she said. “And yet another bill. More bills coming on top of bills, but I’m still here today before you.”

Ramirez pulled a clear, resealable, gallon-sized bag from her purse. It was filled with different medications she’s required to take every day. 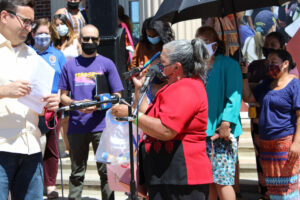 “It’s a struggle just to pay [for] this medication. I don’t have insurance, I don’t have anything that covers it,” she said. “I live off of the kindness of others and donations and my family that are helping me.”

Ramirez is lucky: According to a report released by Families USA, from the beginning of the pandemic to Aug. 31, 2020, 32% of COVID-19 deaths were related to the health insurance gap.

His answer: ensuring that everyone, “regardless of race, gender identity, and immigration status,” has access to primary care.

Comptroller Peter V.R. Franchot has declined an opportunity to debate his main rivals in the Democratic gubernatorial primary later this week — a decision…