The State Board of Education reviewed Maryland’s 100-page plan for spending nearly $2 billion in coronavirus emergency funding on Tuesday — and returning to in-person instruction is a top priority.

The federal aid from the American Rescue Plan is intended to help reopen schools safely and to help meet students’ academic, social and emotional needs.

The American Rescue Plan’s Elementary and Secondary School Emergency Relief (ESSER) provides $122 billion in to states for Pre-K – 12 schools across the nation.

In April, states received two-thirds of their ESSER funds. The remaining third will become available after the U.S. Department of Education approves the state’s plan for using ESSER funds. In developing the plans for using the funds states must consider input from stakeholders.

Maryland has already received $1.3 billion of the total $1.95 billion in the American Rescue Plan’s ESSER funds, according to MSDE.

Last week, the U.S. Department of Education posted plans from 28 states that met the June 7 deadline to submit plans for using ESSER funds. But state superintendent Karen B. Salmon had asked for, and was granted, an extension to July 30 to allow incoming state superintendent, Mohammed Choudhury, to review the plan after he takes office July 1.

Local school systems should receive the remaining portion of ESSER funds by August, according to MSDE.

In its draft plan, MSDE reported that its top priority is to speed the return to in-person instruction in the coming school year. The department’s next priorities are to address mental health, social-emotional learning and academic losses from the pandemic.

But Cheryl Bost, president of the Maryland State Education Association, said facilitating a return to in-person learning is a “wasted priority” because school systems have already announced that they are returning to in-person learning. Instead, expanding digital access should have been a priority, the union president said, because virtual learning will continue even though the pandemic is nearing its end.

Bost also said she was disappointed about the lack of stakeholder collaboration in drafting the plan.

“It was not the intention of the crafters of the American Rescue Plan to show stakeholders a plan just to have them react to it,” Bost said. “I’m really looking for that to change underneath the new state superintendent.”

According to the draft plan, MSDE will focus on supporting recent high school graduates who want to pursue higher education but are not ready to take college-level classes because they lost learning time during the pandemic.

Also, in partnership with the Maryland Higher Education Commission and local institutions of higher education, MSDE hopes to facilitate conversations to determine next steps, such as summer remedial courses, to ensure that this group of students are prepared for college.

Community colleges have “stepped up” during the pandemic, and students can finish career technical education (CTE) programs at community colleges supported by MSDE, Tiara Booker-Dwyer, assistant state superintendent for Career and College Readiness for MSDE, told board members.

To address social-emotional learning, MSDE is implementing a statewide mental health program with six regional crisis response and clinical support teams focused on those needs for students, families and educators.

The regional teams will include clinical psychologists, social workers and school nurses.

There will also be “family navigators” — individuals experienced in caring for children with behavioral challenges — who will connect families to local community providers and assist with case management, according to the draft plan.

Board member Rose Li asked if the ESSER funds could be used for school building construction costs, highlighting the need to improve ventilation in buildings. Salmon said the Interagency Commission on School Construction is the main agency that works on renovating school buildings and that “there are many low cost improvements that can be made to ventilation.”

Board members unanimously approved sharing the ESSER draft plan with stakeholders before reviewing it with the new state superintendent Choudhury on July 27 and submitting the plan to the U.S. Department of Education by July 30. 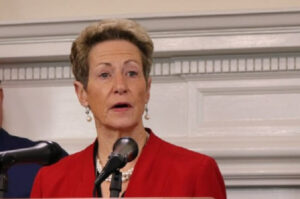 Salmon planned to retire in 2020, but board members extended her contract by one year in response to the COVID-19 pandemic.

Tammy Fraley, president of the Maryland Association of Boards of Education, appeared online to thank Salmon for her service.

“Thank you for your willingness to extend your contract last year during the unprecedented pandemic — the continuity of your leadership helped bridge this state so that we could recover, and we are now in that recovery thanks to you and the rest of your staff,” she said.

“To thread that needle and to do that in the diplomatic way that you have, and to lead everybody in that direction, which based on the results we saw today about school achievement and test performance, I think was the right thing to do, and it really took bold, courageous decision-making and leadership to do that, so I commend you for that,” Li said.

Jean Halle, board vice president, added “I personally want to thank you for being here for an extra year — I know it was a personal sacrifice.”

New governor was circumspect on the campaign trail, referring obliquely to challenges facing the state without directly attributing problems to his predecessor.

Collaboration was the main theme at a joint meeting where two education groups discussed ideas to revamp the state’s education system.

Blueprint board reviews college and career readiness standards, but there’s disagreement on a timeline

A proposed timeline estimates it could take five years to implement new college and career readiness standards — or make changes to them.