On June 14, I joined my brother and many other immigrants in a five-day fast with the Fast for Freedom because I want to shine a spotlight on our nation’s moral obligation to provide a pathway to citizenship for undocumented immigrants.

For too long, immigrants like myself have been traumatized by the awful immigration policies put in place. For too long, I was in the shadows developing a horrible anxiety that consumed most of my adolescent years, and I still fight against this day.

I am fasting to show Congress that immigrants are truly and undeniably resilient. I am doing this for my family. My brother and my mother who are the only people who are by my side, yet still remain undocumented.

I go hungry to honor those young immigrants who fear coming out of the shadows because of the horrible stigmas placed upon immigrants due to the lack of policy by our elected officials. I fast because I want these decades of anguish and fear to come to an end.

Most importantly, I fast for a pathway to citizenship for the 11 million undocumented immigrants that uplift this nation each and every day.

June 15 was the ninth anniversary of DACA, Deferred Action for Childhood Arrivals, a program that President Obama put in place, understanding that it was only a Band-Aid to a bigger problem that Congress has to solve. The very nature of the program is temporary, as proven by its constant attacks by the previous administration, a scary time for anyone like me. 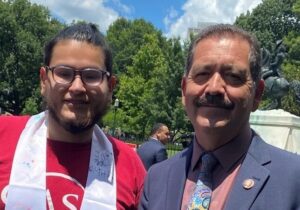 And yet, I fought back, understanding that even that horror is temporary. I worked hard to get candidates who believe in the immigrant community elected. I knocked on thousands of doors and spoke to countless voters as part of the CASA in Action electoral program. Other people of color and immigrants like me knew that nothing could stop us until there was a new executive and therefore, new policies.

However, it is Congress that has to move and move now. Any executive action is temporary. Any legislation that Maryland passes only helps those who call this beautiful state home. What I need, what millions need across the country, is immigration reform spurred by Congress. One that values not just DACA holders like me but also those who have the lesser-known program temporary protected status, similar to temporary asylum, and more so yet those who have no immigration status and live undocumented, like some of my family.

Some of you may remember me when I spoke out to protect my mom, who is undocumented, back in 2018. When the police officer pulled her car over in Hyattsville, the interaction should have just ended with a speeding ticket. Instead, the local police officer held and handed her over to ICE. I was scared, thinking she’d be deported because she had that civil violation. Though she has lived in Prince George’s County for decades, her fate was in the hands of that ICE agent.

The recent passage of the Dignity Not Detention Act should mean that in the state of Maryland, families like my mom’s should have more protection. Despite Gov. Larry Hogan’s attempts to destroy the hard work of immigrant activists in vetoing this valuable bill, the Maryland General Assembly is set to take it across the finish line and overturn it. But the reality is that millions of others across the country need comprehensive protection. And only citizenship offers that – not DACA nor temporary protected status.

The ups and downs have left me drained and hungry – not for food but hungry for the justice that my mom deserves, that I deserve, that my brother deserves, that 11 million deserve.

While my brother and I fast, we will pray for Congress to take heart in our sacrifice and finally offer the relief we need.

The writer, a Hyattsville resident, is a community organizer and a Deferred Action for Childhood Arrivals – DACA – recipient.

Judge Lisa Dornell: Not Every ‘Win’ Under the Law Is a Win for Justice

The disconnect between Maryland’s probation before judgment statute and federal immigration law essentially results in a profoundly unjust situation.