Yaakov “Jake” Weissmann, who served two Maryland Senate presidents as their chief of staff, plans to step down at the end of July.

Weissmann will be replaced by Sally Robb, who is currently the deputy chief of staff to Senate President Bill Ferguson (D-Baltimore City). 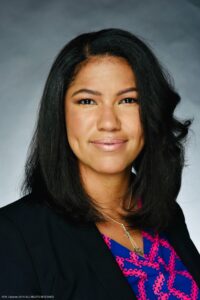 Robb will be the first Black woman to serve as the top staffer for a Maryland Senate president, and with Alexandra M. Hughes holding the chief of staff role for House Speaker Adrienne A. Jones (D-Baltimore County), it means both presiding officers of the General Assembly will have Black women leading their offices and legislative operations.

“Sally has a keen understanding of policy and the legislative processes that has been so important to the Senate’s historic success,” Ferguson said in a statement. “Sally understands the bipartisan nature of the Senate, has deep relationships on both sides of the aisle, and will provide stable leadership as we head into the final year of this term.”

Weissmann, who started as chief of staff under the late Senate president Thomas V. Mike  Miller Jr. (D-Calvert) in 2018 and retained the job when Ferguson formally succeeded Miller at the beginning of 2020, has worked for the Senate president’s office for a dozen years.

Weissmann said he is not sure what his next professional move will be.

“I have had the greatest honor of working in the best legislative chamber in the country over the last 12 years, and not a day goes by where I have not appreciated the opportunity,” he said in a statement. “In my time working in the Senate, I have worked for some of the best public servants Maryland has ever seen, with some incredible staff members, and have had the honor of serving for two incredible leaders in President Ferguson and President Emeritus Miller. I appreciate the opportunity, and look forward to announcing my next steps at a later point.”

Weissmann was serving as president of the Maryland Young Democrats in 2009 when he was hired by Miller to become a special assistant in his office. Weissmann previously worked as an aide to Del. Kirill Reznik (D-Montgomery), was a campaign aide to then-Del. Keiffer J. Mitchell (D) when he ran for mayor of Baltimore in 2007, and also worked on the campaign of U.S. Sen. Benjamin L. Cardin (D-Md.) and for the Maryland Association of Nonprofit Organizations.

But he’s best known for his durable career in the Senate president’s office, where he held a variety of roles, including as a key strategist for the Senate Democrats’ campaign committee during the 2010, 2014 and 2018 election cycles. He became deputy chief of staff to Miller in 2011 and was elevated to chief of staff in the fall of 2018, replacing Miller’s previous top aide, Pat Murray.

Weissmann’s tenure as chief of staff covered a tumultuous period for the state Senate: Just months after Weissman assumed the top job, Miller, who had been Senate president since 1987, informed his colleagues that he was suffering from stage 4 prostate cancer. That spring, House speaker Michael E. Busch (D-Anne Arundel) died unexpectedly. In the fall of 2019, Miller stepped down as Senate leader, and Ferguson was elected to succeed him.

COVID-19 cut the 2020 legislative session short for the first time since the Civil War; Miller resigned his Senate seat in December 2020 and died a month later; and the 2021 legislative session was carried out with strict and often restrictive protocols necessitated by the pandemic.

“Over the last 18 months, the State of Maryland has experienced a global pandemic, embarked on a new vision for public education, and tackled unforeseen State budget challenges and surpluses,” Ferguson said in a statement. “Amidst all of this, Jake has been my chief advisor, strategist, and counsel. His insights and abilities have allowed us to navigate challenges the Senate of Maryland had never experienced before. I owe an immeasurable debt of gratitude for his steadfast service and commitment to this work and to members of the Senate.”

“Jake always had an open door and an open ear to every Senator, regardless of their party affiliation,” the GOP senators said. All 47 Senators benefitted from Jake’s professionalism and commitment to the Maryland Senate. Without Jake’s leadership, we would not have been able to successfully navigate the 2021 Legislative Session. His kindness and sharp wit will be missed, and we wish him all the best in his next chapter.”

Simonaire and Hough said they “look forward to developing a strong working relationship with Sally Robb in advance of the 2022 Legislative Session.”

Robb was hired to be Ferguson’s deputy chief of staff in November 2019. She has previously worked for the Department of Legislative Services, including as senior policy counsel to the House Economic Matters Committee, and as associate director of State Affairs for Johns Hopkins University and Medicine.

She earned a J.D. from the University of Maryland Carey School of Law, and a B.A. from Morgan State University. She lives in Baltimore with her husband and two dogs.

Robb is the granddaughter of Enolia P. McMillan, a Baltimore civil rights icon who became the first woman president of the national NAACP, serving from 1984 to 1990 (McMillan’s image is on a mural known as the Wisdom Wall outside the St. Stephens Court Apartments in West Baltimore, next to pictures of Harriet Tubman and Thurgood Marshall). Robb’s brother-in-law is U.S. Rep. Kweisi Mfume (D-Md.).

“I am honored to continue serving in this new role,” Robb said, “and look forward to building on the tremendous foundation of collaboration that embodies the institution of the Senate of Maryland.”