Shortly after the vote, a leading foe of the controversial project told a rally in Rockville that he and Rep. Anthony G. Brown (D-Md.) recently lobbied U.S. Transportation Secretary Pete Buttigieg to reject the governor’s plan, claiming it fails key equity and climate tests.

With its vote, the Transportation Authority board accepted the Maryland Department of Transportation’s selection of a consortium, Accelerate Maryland Partners, to begin work on the plan to rebuild the bridge and add four High Occupancy Toll (HOT) lanes to portions of the Beltway and I-270.

If the group is awarded the final construction contract next year, it would finance and build the expansion in exchange for the right to set toll rates on the new lanes and keep almost all of the revenue. Existing regular travel lanes would remain free; the state is converting an existing carpool lane, which is currently free 20 hours a day, to a toll lane.

The unanimous vote by the authority board to advance the project was not unexpected. The panel is made up entirely of Hogan (R) appointees and has been briefed on elements of the road-widening plan for many months. Transportation Secretary Greg Slater chairs the board.

Members of the panel listened in silence for 90 minutes while Slater and other Maryland Department of Transportation officials described the items to be voted on. They asked only one question about the 391-page proposal, which was posted to the MdTA website shortly before the meeting.

Slater stressed that Tuesday’s vote to accept the agency’s preferred concessionaire and reduce the project’s scope represented an important — but preliminary — step in the approval process.

“The phase [public-private partnership] agreement before us today is not for construction,” he said. “It’s to bring a partner to further preliminary design, pre-construction work and other due diligence activities.”

Once that period concludes, MDOT is expected to immediately place the state’s proposed contract with Accelerate, a consortium led by Australian firms Transurban and Macquarie Capital, on the agenda of the Board of Public Works for a vote, likely in mid-to-late July.

The board is made up of Hogan, Franchot and Kopp, and is chaired by the governor.

The MdTA board received a closed-door briefing on a protest that a losing bidder, Capital Express Mobility Partners (CEMP), has filed. That consortium, led by Madrid-based Cintra, has claimed the state’s procurement process was tilted to benefit the winning bidder, because Transurban has a sprawling network of “express toll lanes” just across the American Legion Bridge in Northern Virginia.

CEMP lost its protest to the agency’s contracting officer, and its appeal to Slater is pending.

If CEMP is unable to get the agency to revisit its selection process, it has the option of suing MDOT in Circuit Court. (Under the state’s public-private partnership law, the Maryland Board of Contract Appeals has no role in adjudicating disputes between losing bidders and agencies.) 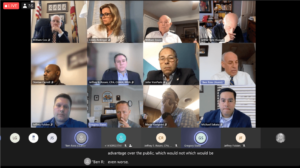 Members of the Maryland Transportation Authority board listen as transit advocate Ben Ross discusses the plan to widen Interstates 495 and 270. Screenshot.

Ben Ross, head of the Maryland Transit Opportunities Coalition, urged the board not to vote until the protest has been resolved. He used the Freedom of Information Act to obtain Virginia’s pact with Transurban, but he said entire sections were blacked out.

“What we got is full of redactions,” he told the board. “Every one of these blacked-out clauses is being kept secret for a reason.”

Deputy project manager Jeffrey T. Folden assured the board that the agency “provided all proposers fair and equitable treatment.”

“Moving forward now is necessary to protect substantial state interests and managing risks and meeting our infrastructure needs,” said Folden, reading rapidly. “Delaying the pre-development work would do irreparable harm to the state.”

Shortly after the board’s vote, approximately 140 opponents of the project rallied outside a Rockville church located along I-270. The hastily-organized event was put together following media reports late last week that the MdTA board had quietly added a special meeting to its schedule.

Speaking above the roar of traffic, Montgomery County Executive Marc B. Elrich (D), Rockville Mayor Bridget Donnell Newton, and others slammed the state’s proposal, saying it insufficiently invests in new transit, would increase pollution and cut-through traffic, and would disadvantage lower-wage workers. 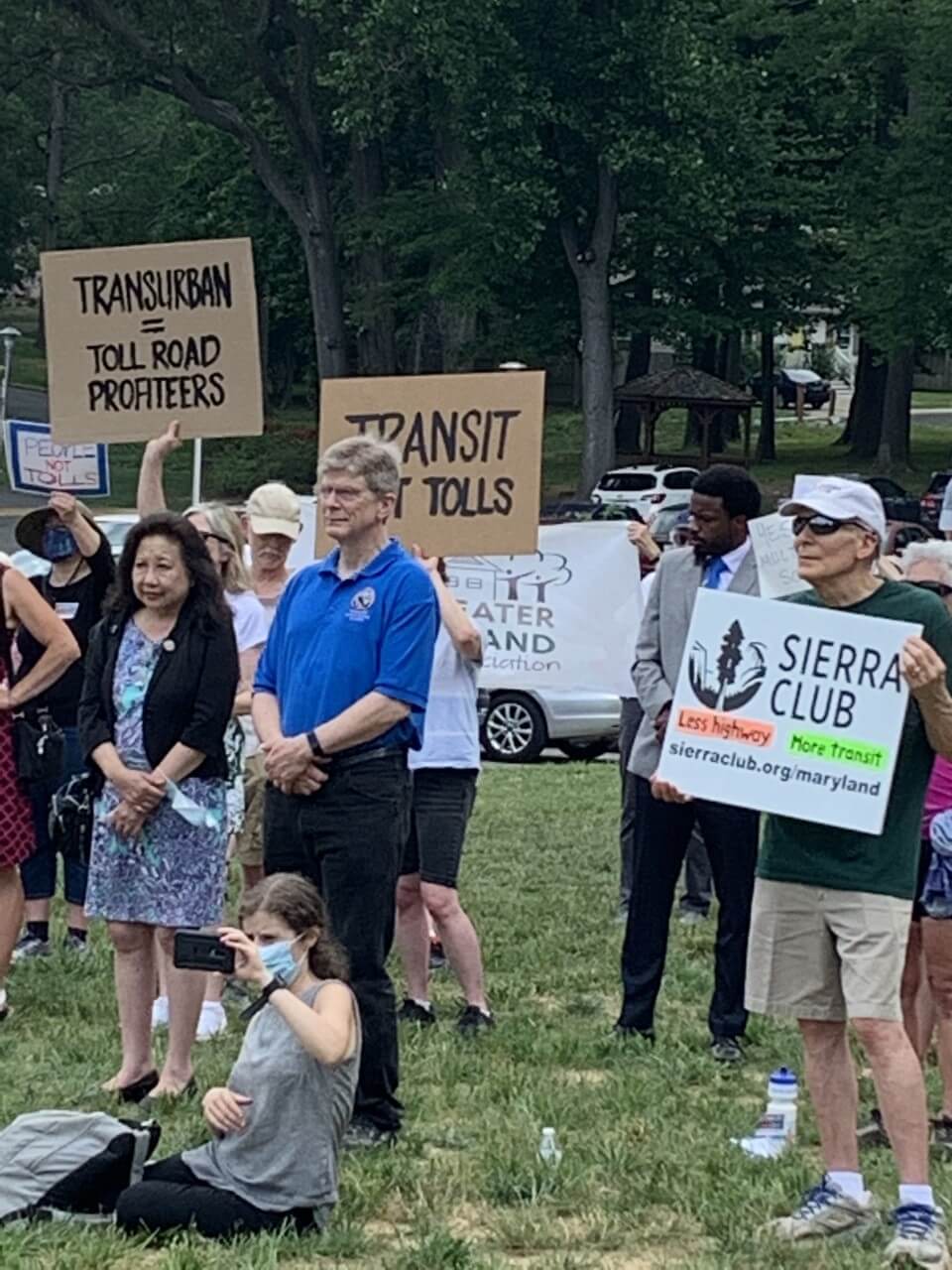 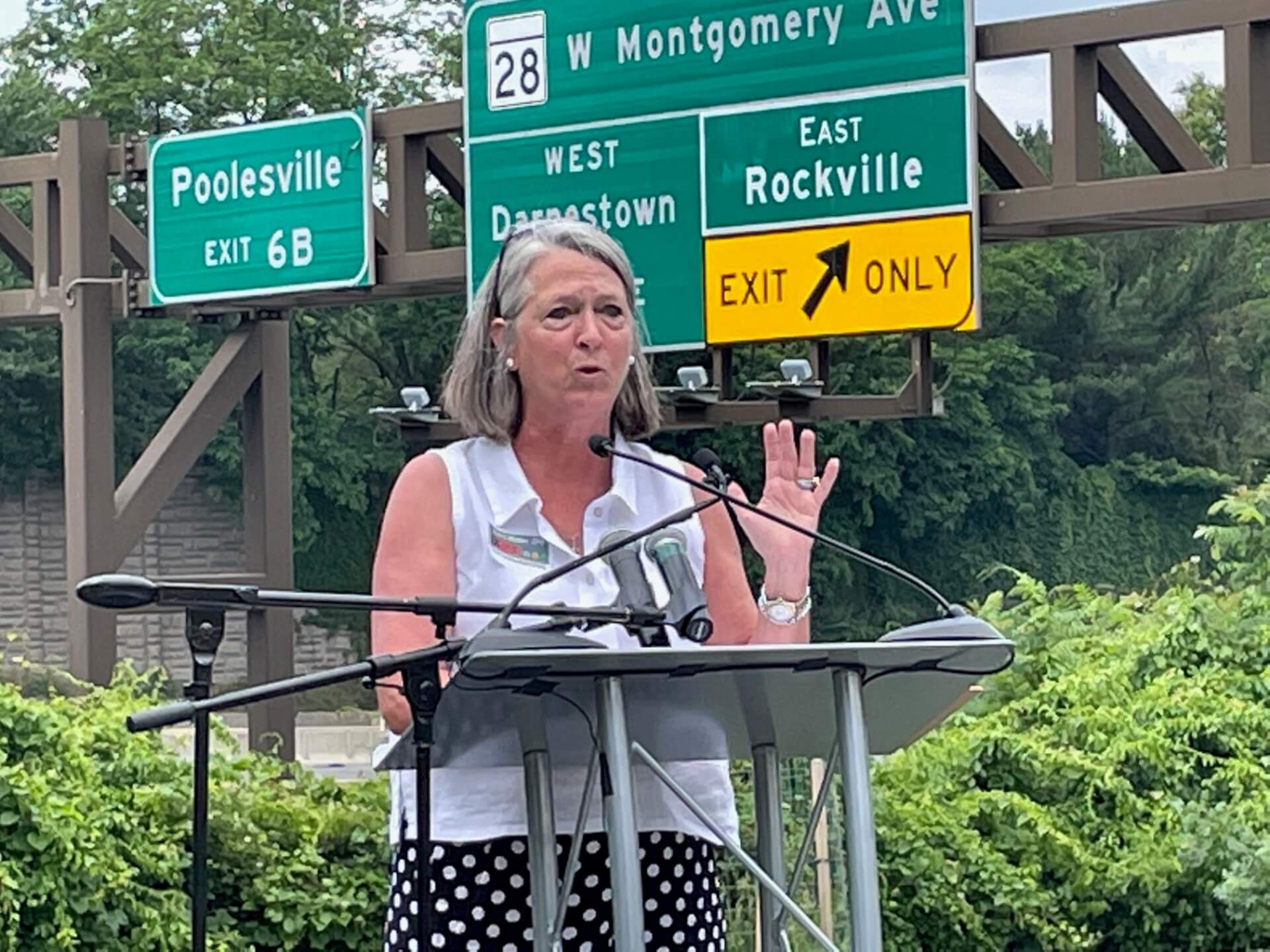 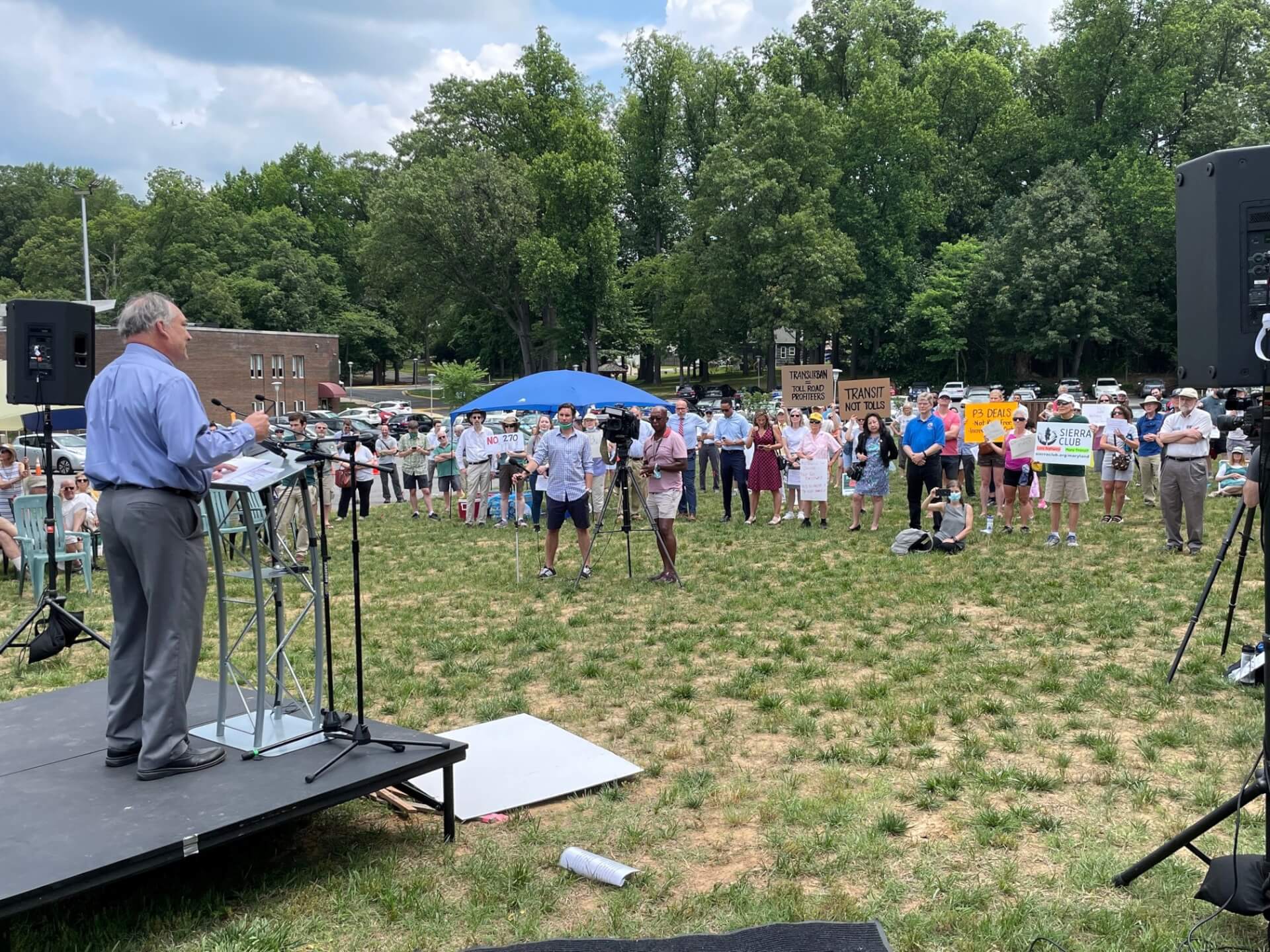 Hucker, the Montgomery council president, told the crowd that he and Brown pressed Buttigieg, during a May meeting on the county’s transportation priorities, to insist that Maryland focus more on moving people than cars.

“This is what I told Secretary Pete: We want a true multi-modal mobility plan,” he said. “And that starts with transit.”

Hucker said Maryland should invest more in bus-rapid transit and the MARC system, which he called “a rinky-dink little commuter rail that goes one way in the morning and one way in the evening.”

Hucker described Buttigieg as being “very interested” in the pushback against Hogan’s highway-widening plan and that “he asked a lot of questions” during their May 10 meeting.

“The federal government, I can tell you, knows a lot of the problems with the Hogan plan and they know that we have solutions that many in the media haven’t talked about [and] that we’ve been asking for for years.”

Elrich called the replacement of the American Legion Bridge “the perfect project” for federal funding. “I’ve told Comptroller Franchot … he should stand up and say: Before we do this as a P3, let’s try to get this money out of the federal government.”

Newton praised Slater for visiting Rockville last year to learn about the city’s concerns, but she expressed disappointment that the state is pressing forward with a “P3 folly” without answers to the 23 questions that leaders posed.

“I want something that would be socially just, environmentally sound and fiscally supported by federal funding,” she said to applause. “We’ve got to stop this madness and bring sanity and equity to our transportation solutions.”

Franchot, a candidate for governor in 2022, is believed to be the swing vote on the Board of Public Works. An aide said that he would not comment publicly on the proposal until it comes before the panel.

“We need the Board of Public Works to reject his crazy 1980s project,” Hucker told the Rockville rally.

“There’s more [federal] infrastructure money available now than ever in our lifetimes. We are nuts to be stuck with an outdated, ten-year-old P3 financing model that was dreamt up by private finance companies that want to make a profit for foreign companies.”

Editor’s Note: This story was updated to make clear that an existing High Occupancy Vehicle lane on I-270, which is currently free 20 hours a day, would be converted to a toll lane under the road-widening proposal.