Other than my mom, who left this Earth a decade ago, the deceased person I’ve probably missed the most over the past five years has been Wayne Barrett, my mentor and role model in the journalism business, who died on Jan. 19, 2017 at the age of 71. That’s a significant date that we’ll get back to shortly.

When I think about the madness of the last five years, I think maybe Wayne would have made sense of it all. He knew and understood some of the major players of the past half-decade better than anyone.

You may have heard of Wayne Barrett: He was a famous muckraker and political reporter at New York’s Village Voice newspaper, now also dearly departed, for 37 years.

Name any high-profile New York politician of the past half century, and Wayne has made them sweat: Mario and Andrew Cuomo, Ed Koch, Rudy Giuliani, Chuck Schumer, Al D’Amato, Al Sharpton, Mike Bloomberg, and more. Wayne, along with his mentor Jack Newfield, was forever writing about the connections between political leaders and mob bosses; about evil landlords and the municipal officials who turned a blind eye to their malfeasance; about bureaucrats on the take; about hack judges who did not deserve their jobs and made disastrous rulings; and about how the political system was rigged for insiders, often at the catastrophic expense of poor New Yorkers of color.

Wayne was also the very first journalist in New York to take a hard look in the late 1970s at a brash young developer named Donald Trump.

Trump’s dad, Fred, was already a known entity in the city with heavyweight political connections and a large real estate portfolio in Brooklyn and Queens; but Donald’s attempts to expand the family empire into Manhattan turned heads, and led to flattering profiles in the mainstream media that emphasized Donald Trump’s glamour and glitzy lifestyle. Only Wayne was writing about all the favors Trump was getting from state and city officials, and all the sweetheart deals and wires he pulled as he looked to build his first big project in midtown Manhattan. 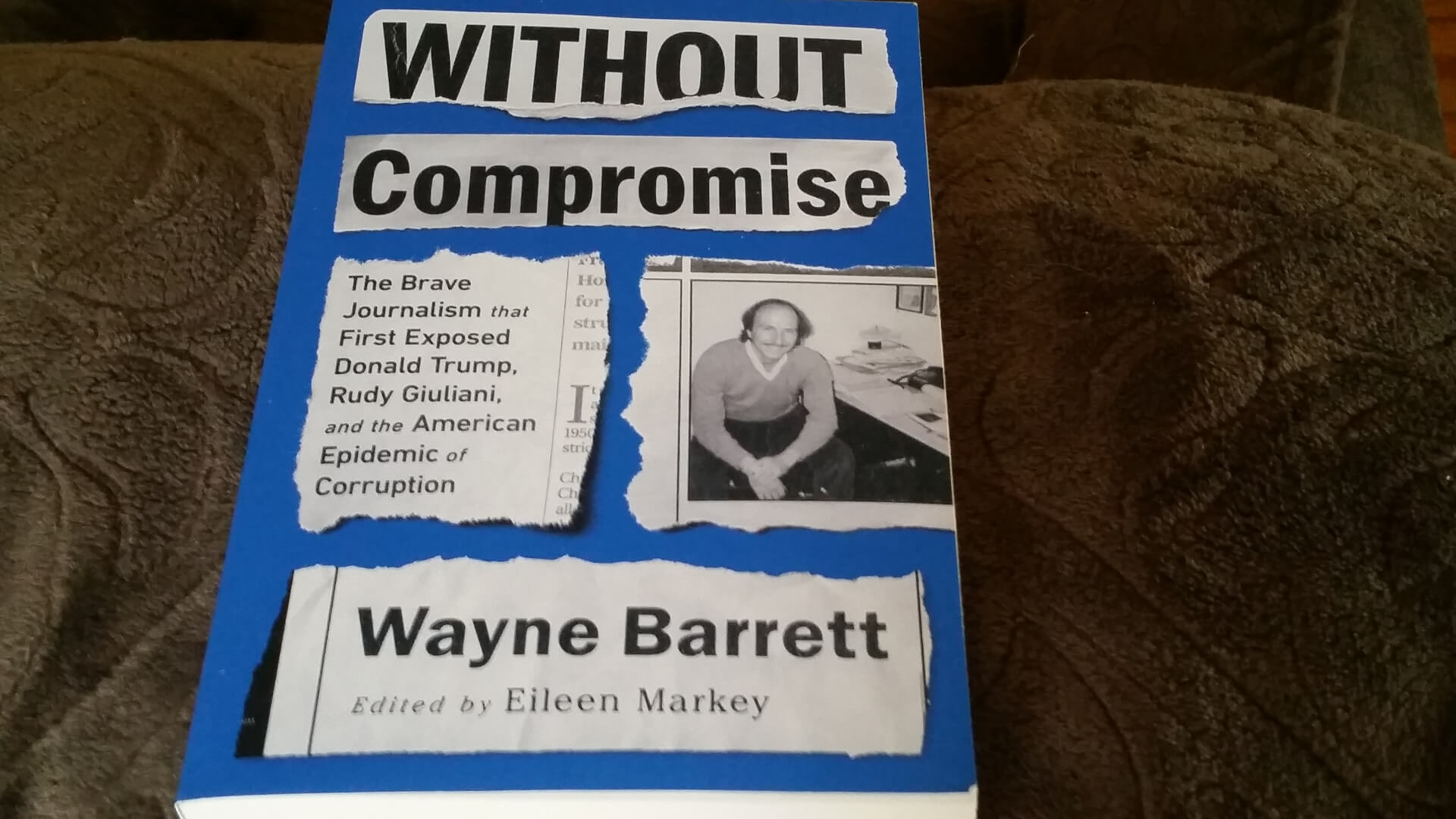 “Without Compromise,” a collection of Wayne Barrett’s articles, was published last fall.

This was who Wayne was, and this was who I learned from when I was fortunate enough to work for him at the Voice in 1989. In the early 1990s, Wayne published a book called “Trump: The Deals and the Downfall,” which remains the best — and most searing — book about the man to this day. Wayne bought a house on the Jersey Shore just so he could keep close tabs on Trump’s dealings in Atlantic City. Wayne was once arrested trying to crash one of Trump’s birthday parties at an Atlantic City casino — and the cops were called by Trump himself. Now that’s mutual obsession.

But then, Wayne developed obsessions about lots of New York political figures, and while I was there, even though he had been feuding with Koch for years and a consequential mayoral election was underway, even though the “Central Park Five” case flared while I was working for him (a major police failure, Wayne concluded early), Wayne seemed most interested in the speaker of the State Assembly, a small-time crook named Mel Miller.

On the very first day I worked for Wayne, he had me call some buddy of Miller’s who, Wayne believed, had a no-show job with the state. My instruction was to ask the guy what he did.

“Read my written job description,” the guy replied, and hung up. Of course, I was hooked. Some months later, Wayne and I collaborated on a story about how Miller’s law firm was representing a maker of electronic ankle bracelets, which was trying to get a lucrative contract from the city’s corrections department. To this day, I can’t believe he put so much faith in my reporting.

Wayne was a very stern taskmaster. After one particularly grueling day, as I was updating him by phone on what I had done and what I had learned, he interrupted, “So you’re telling me you accomplished absolutely nothing.”

I stammered, and tried to assure him that really, I had made pretty good progress on whatever stories we were working on. Only later did I learn that Wayne used this line at some point during the career of every intern who ever worked at for him. What a great motivating tool and hazing ritual!

When Giuliani was U.S. attorney in New York’s Southern District, he and Wayne were very close. Wayne admired Giuliani’s zeal at going after mobsters, Wall Street cheats, and political bosses. In fact, when I worked for Wayne, we literally had Giuliani’s bedside phone on speed dial. Just a few years later, Wayne and Giuliani had a rift, as Wayne disapproved of Giuliani’s racially-tinged political rhetoric and support for bullies and sociopaths in the New York Police Department.

Wayne eventually would write two biographies of Giuliani — one which revealed that the ballyhooed crime fighter’s father was himself a small-time hood; the other dismantling much of Giuliani’s leadership after the 9/11 terrorist strikes.

Among the legion of Wayne’s former interns — and there were hundreds of them — it was often said that once you work for Wayne, you always work for Wayne. I learned this firsthand in 2013, when Wayne called seeking a favor. He was investigating some unsavory character who was tangentially involved with a leading candidate for mayor of New York and had testified as a character witness for former Prince George’s County executive Jack Johnson (D) when Johnson was being sentenced for his federal crimes. The guy also had some ties to Maryland labor unions.

So there I was, in my 50’s, a quarter-century removed from working for Wayne, setting up interviews for him with Maryland labor sources who might shed some light on this guy, taking half a day off from work so I could go to the federal courthouse in Greenbelt and pull the file from Johnson’s sentencing hearing. I loved it.

Some of Wayne’s former interns kept in touch with Wayne almost weekly. I was more of a twice a year guy — except when notable New York political figures died. So when Herman Badillo, Bess Myerson and Mario Cuomo met their makers within a month of each other in late 2014 and early 2015 (look them up, kids), I was on the phone with Wayne a lot.

By then, he had been diagnosed with a rare lung disease. That affected his mobility and, to a degree, his ability to work (he was let go at the Voice in 2011, for budgetary reasons, but wrote for a handful of other publications after that).

But when Trump started running for president in 2015, Wayne was suddenly in demand, for his deep knowledge of Trump’s business dealings and mindset. He appeared frequently on TV and radio and in print to explain the candidate and his circle of political mentors (Roy Cohn, Roger Stone et al.) to America and the world, and he literally let dozens of reporters go through the boxes of Trump files he kept in the basement of his Brooklyn brownstone.

As I mentioned before, Wayne died on Jan. 19, 2017 — the day before Trump was inaugurated. There was something stunning and Shakespearean about it, as if he could not bear to see this man become president.

That night, Roger Stone tweeted, “If you wait by the river long enough, you will see the bodies of your dead enemies float by,” and “Wayne Barrett was a piece of human excrement posing as a human being. Rot in hell, you p—k.” Class.

I have thought about writing about Wayne many times since and could never really get anything off the ground. But as Trump and Giuliani and Stone and so many others in that orbit rained chaos on the world over the past five years, I wished Wayne had been around to help us understand the intersecting motivations of these dangerous and self-interested characters.

I guess I’m moved to write about Wayne now for largely personal — maybe even self-indulgent — reasons.

As readers know, I passed the baton at Maryland Matters last week to my colleague, Danielle Gaines. This has inevitably led me to reflect a bit about the progress of this young news enterprise and about my own career.

The last time I talked to Wayne was in July of 2016. Even though he was ill, I thought there was a remote chance he’d go to Cleveland for the Republican National Convention. Trump’s nomination, I figured, would give Wayne a new round of publicity, and since I was going to be in Cleveland, I’d want to see him if he was going to be there.

Wayne was too sick to go to Cleveland, as it turned out. But as we chatted, I told him a little bit about my plans to launch Maryland Matters. We were going to begin raising money that fall, and I asked him if he’d be willing to speak at a fundraiser later that year, virtually — as if I knew anything about the technology we’d need to pull it off, which we’ve become so familiar with over the past year.

Wayne said he’d be delighted to do it. But that was then, and time flew, and I never got my act together to set something up with Wayne that fall, let alone talk to him again. And then Trump was elected. And then Wayne was gone.

But I’ll forever cherish his final words to me as we rang off the phone that July afternoon: “I’m proud of you.”

Josh Kurtz’s column will appear every other Tuesday.

“Without Compromise,” a collection of essays about Wayne Barrett, featuring some of Barrett’s most noteworthy articles, was published last fall.