As climate change leads to hotter days across the country, the cost of cooling public school buildings grows higher. New research estimates that more than 280 Maryland public schools that did not need air conditioning in 1970 could have to spend $818 million to install new heating and cooling systems by 2025 to keep classrooms at a safe temperature.

These schools may also have to spend an additional $32.8 million every year to operate and maintain the HVAC systems, affecting more than 900,000 students across the state, according to the report from the Center for Climate Integrity, an environmental advocacy group. And those costs are expected to increase as the climate continues to heat up.

Montgomery County Public Schools, the largest school district in the state, faces the highest increased costs. By 2025, the school system is expected to experience 14 more “heat days” a year than in 1970. Heat days are defined in the report as a day over 80 degrees Fahrenheit during the school year, between Sept. 1 and June 15; there are expected to be 49 “heat days” in Montgomery County each year by 2025, according to the report.

The report set a threshold of 32 days above 80 degrees Fahrenheit during the school year as the point at which air conditioning is needed, based on engineering protocols, peer-reviewed studies examining the relationship between heat and learning, and actual practice in school systems across the country.

Wicomico and Frederick counties are expected to see the highest increase in annual heat days: 17 additional school days. Charles County is projected to have the most high-heat days during the school year: 53. 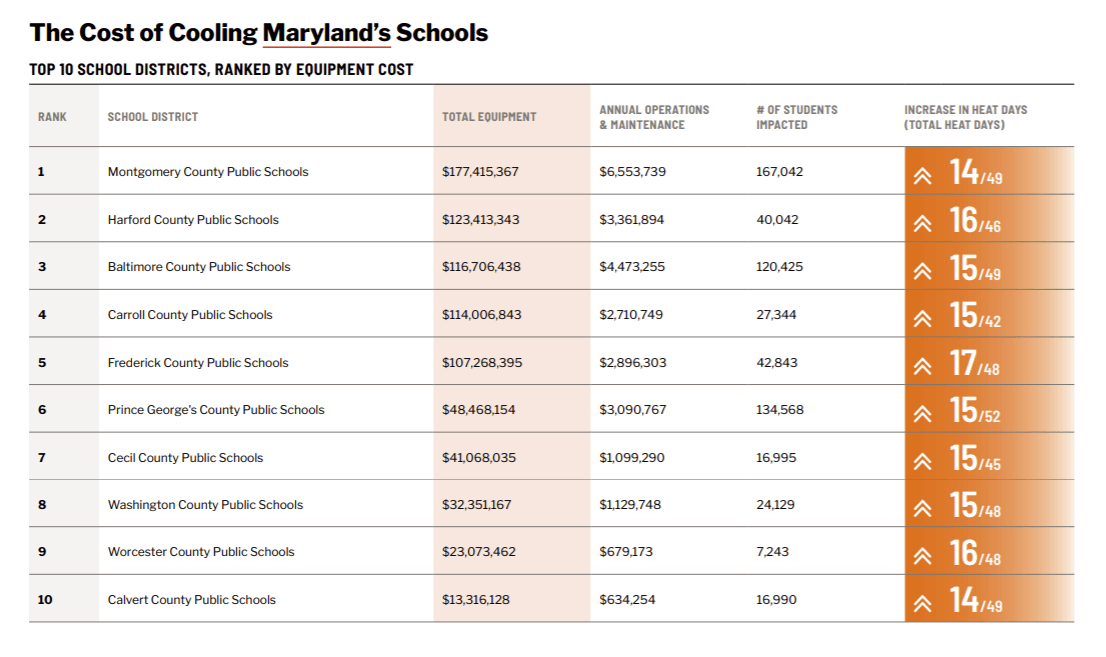 Total equipment is the combined estimated HVAC installation and upgrade costs from 1970–2025.
Annual Operation & Maintenance is the estimated costs of operating and maintaining the HVAC systems.
Heat days are the number of days 80 degrees or warmer between September 1 and June 15.
The increase in heat days was estimated between 1970–2025.
Source: Center for Climate Integrity.

The report projects that more than 17,000 public schools across the country that did not need cooling systems in 1970 will need them by 2025. This will cost $45 billion for HVAC system installation by 2025, according to the report. The average public school building is around 40-years old, built during a time when cooling systems were not necessary for the school year.

Additionally, around 16,000 additional schools will need to upgrade their existing HVAC system to improve their cooling capacity, which will cost more than $530 million. New York City and Chicago school districts are estimated to bear the highest cost at more than $1 billion by 2025 for new HVAC system upgrades.

“Climate change is unrelenting. Regardless of competing priorities, as the school year heats up, school systems will have to install and operate air conditioning systems to maintain a viable learning environment for millions of students,” Sverre LeRoy, climate scientist at the Center for Climate Integrity, and lead author of the study, said in a statement.

The U.S. Government Accountability Office found that more than half of the schools in the country need to replace at least two major building systems, including heating and cooling systems. But around 40% of the school districts across the country cannot raise property taxes and instead rely on state money for building improvements, according to the Government Accountability Office.

Hot classrooms impede student learning, and a study from Harvard University evaluated 10 million students who took the PSAT and found that hotter school days during the year before the test reduced learning, especially for low income and minority students. The study concluded that each 1-degree increase in school year temperature reduces the amount learned that year by 1%.

The Center for Climate Integrity also found that Baltimore City is especially behind other school districts in the state in keeping classrooms cool, as 24 of the city’s public schools are forced to close on very hot days because of the lack of air conditioning.

“As our climate continues to warm and extreme heat days become more frequent and severe, students across the city of Baltimore — especially in low-income neighborhoods and communities of color already threatened in school by toxic air pollution nearby — are paying the price with their health and learning,” Del. Stephanie Smith (D-Baltimore City) said in a statement.

The large costs that school systems have to bear in response to climate change should be paid by the polluters, the authors of the report argue.

Already, Baltimore City, Annapolis and Anne Arundel County have filed lawsuits against oil and gas companies for deceiving the public about their role in climate change.

“As parents, officials, teachers, and taxpayers grapple with the price tag and trade-offs necessary to keep schools at safe temperatures for students, we must hold polluters to the same standard we teach our children: When you make a mess, you have to clean it up,” the report states. “Oil and gas executives turned up the heat in these classrooms; they need to pay their fair share to cool them down.”

Although the coronavirus pandemic has accelerated federal support for air ventilation upgrades in school buildings, global warming has been causing hotter school days before the pandemic began, necessitating proper ventilation in schools.

“COVID-19 made proper ventilation a priority, but climate change caused the cooling crisis in America’s public schools,” Richard Wiles, executive director of the Center for Climate Integrity and a co-author of the study, said in a statement.